By Charlie November 06, 2017
Charlie: When someone tells me that they're unlucky, I assume it's confirmation bias. Some people seem oblivious to all the times they've been fortunate and bemoan all the times they aren't, failing to notice that things average out over a long enough time span.

I've been gaming with Maisey for just over a decade now, and when things go wrong for him, it tends toward the ridiculous. So now, because it amuses me, here are my favourite top three Maisey dice fails. If you've had similar tales of woe, please brighten Maisey's day and share them in the comments.

Losing a squad of terminators is painful. Losing all five in a single shooting phase is even worse, but at least the enemy usually has to use up their snazziest guns to get the job done, or win through sheer weight of fire. Even before terminators gained an extra wound with the coming of 40K's 8th edition it would take an average of 180 lasgun shots to bring down five terminators.

So what killed Maisey's terminators? A single platoon of guardsmen? One good shot from a plasma cannon? Maybe a freak psychic power?

Nope. It was a gaggle of gretchin.

How many gretchin, you ask? 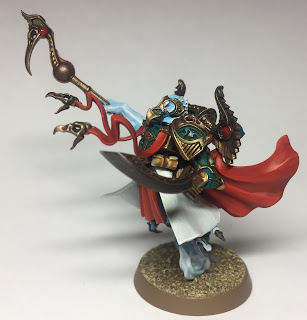 Normally this character is known as Phanek, but for now let's call him Squawkums McFail. He was involved in a raid on some ork-held ruins whilst in search of a MacGuffin, and Maisey was getting frustrated at how many things hadn't gone his way that turn. "Right," Maisey announced, "I'm casting Smite on those orks; I just want to get something killed this turn."

For the record, the orks were retreating. This was just an evil sorcerer venting his frustration on the nearest smiteable object.

Naturally, Maisey rolled snake eyes for the psychic test. No problem, he thought: we have command points in 8th edition for this exact problem! He re-rolled one of the dice. Another 1 popped up. Right then, miscast it is... so Squawkums inflicted three mortal wounds on himself which, since he was already injured from a previous miscast, took him out of play. Clap clap.

This would normally be the end of it, but we were playing a campaign with a very simple unit persistence rule: roll a D6 when a model's taken out. On a 6 it's fine, on a 5-2 it misses the next game, and on a 1 it's dead.

I think you can guess what Squawkums rolled.

There are times when Maisey's ability to roll 1s is so potent that even he is reduced to helpless mirth for the better part of five minutes. Credit where credit's due: he had at least managed to kill something that turn.

Way back when Maisey was first getting into 40k he was immediately attracted to the Imperial Guard (that's the Astra Copywritarum to any young'uns reading this). Something about the poor bloody infantry's fatalism, and the boomy-ness of the tanks, I think. There was one fly in the ointment: he was constantly missing. A 4+ to hit might as well be a 6+ if you're one of Maisey's minis. As his frustration mounted, he flicked through his codex in search of something more dependable. Something that would be impervious to the malice of the cubed betrayers.

Then he found it: regardless of the model's ballistic skill, sniper rifles always hit on a 2+.

Perfect! Maisey immediately bought six snipers plus six spotters, lovingly painted them up, deployed them for their first game, and with a vindictive grin declared his first target, dice in hand. If nothing else, I knew I'd be taking some pinning tests.

We watched as six dice dropped from his unfurling fist. They tumbled across the table, spinning and bouncing between ruins and guardsmen.

The universe paused for a moment.

Stunned, I reached for a calculator, taking refuge from my befuddlement in statistical calculations.

He had achieved the nearly-impossible: six ones.