By Charlie December 15, 2014
It’s both interesting and exciting to see Games Workshop (or G-Dubz, if you’re keeping it real) venturing into new territory with their series Warhammer: The End Times, but this leaves the Beard Bunker’s Hochland campaign setting in a weird place.

For anyone unfamiliar with the Warhammer setting, the last big event in its chronology was the Storm of Chaos, and we decided to set our own story immediately after it. The most recent edition of Warhammer dialled the clocks back to the years just before this event, but they never officially retconned it.

That changed with the release of Warhammer: the End Times.

Our little cul-de-sac of the Old World is now not only beyond Warhammer’s timeline, but mutually exclusive with it. For some reason, this made me feel weird. Apparently I have some deep-seated nerd phobia of doing anything that contradicts the official canon. This is pretty dumb, since said canon has been changed more times than an incontinent pensioner’s Y-fronts.

In a weird way, this ousting from canon-friendly land has given me the shove I needed.

Since we can’t integrate the studio’s output with our setting, we’ll have to just cherry-pick whichever bits of the End Times seem like fun. The return of Nagash? Fun. Bringing back Archaon? Nah, dude’s already been defeated in our story.

Another added bonus of this enforced freedom is that I feel free to fix things. Not that many things, but still... stuff like the orc and vampire involvement in the Storm of Chaos? Gone, as far as I’m concerned. Never made much sense anyway.

The Hochland campaign itself has now been running for about a year and a half. Well, I say campaign... the phrase ‘persistent storyworld’ still feels more appropriate, since there’s no specific end goal-- I digress. The important thing is that it’s up to each player to decide what they want to do in the sandbox. To this end, there are two excellent things on the horizon:

The Coven
Maisey’s long-term goal for his vampires has always been to take the Brass Keep out of Norse hands. That’s why he captured Hovelhof up in northern Hochland (to use as a base of operations) and that’s why Phillippe spent months exploring the Middle Mountains. Centuries ago the Keep was home to a great necromancer, and if you’re going to be the big bad, you need a big bad castle (Hovelhof just isn’t plush enough apparently).

For ages, we all wondered how Maisey would do this. No other faction had an interest in the Brass Keep, and sure, there were Chaos players (both Emma and Nick) but neither of them laid claim to the fortress. So who would Maisey fight? Himself? “Well played, me, looks like I won.”

Well if a wargame isn’t the right way to tell the story, he figured we could use another method. He’s planning to GM a roleplay scenario for three of us, each playing one of the vampires in the coven, in which we have to try and complete some eeeeevil ritual he’s concocting. I’m pretty sure it’s going to be glorious. How could pretending to be a French vampire not be glorious? My only worry is that GCSE French has not adequately prepared me for this role.
“Philippe, I want you and Etienne to find me the Dagger of Wounded Souls.”
“Ou est la piscine?”
“What?”
“Et aussi la bibliotheque?”
“Just get me the ----ing dagger.”
“Gérard Depardieu.”
“Please?”
“Boeuf.”

[sings:] Siege on my face and tell me that you love me
Nick’s general, Volgin, also has castle envy. Which would be fine, except he’s planning to take one of mine: Fort Schippel. Well sod off, Nick! It’s the last thing the Imperial forces still hold in the East, and losing it would mean a real change in Hochland’s... oh wait, yes, that’s narrative juice right there.

We’re planning to do the siege sometime in early February, which gives us time to build up our forces in preparation. This has the added benefit of clearing some things out of my to-do pile, like this cannon, which until recently had sad unpainted in my cabinet for the better part of three or four years: 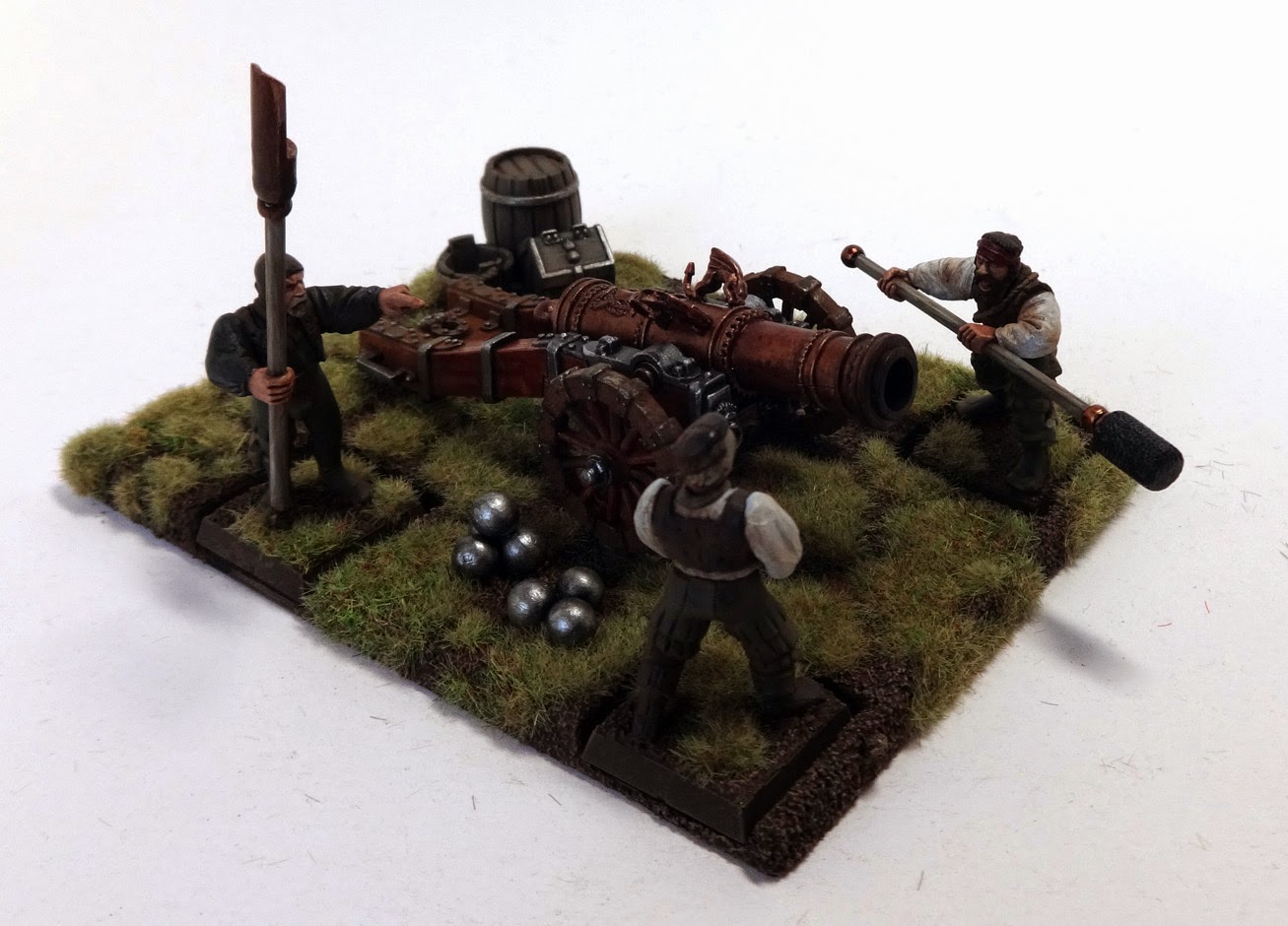 I made a few mistakes – it’s been a while since I’ve done my varnished wood method, and I got a bit slap-happy with the chestnut ink – but whatever, it’s finished! Yay boom-sticks. 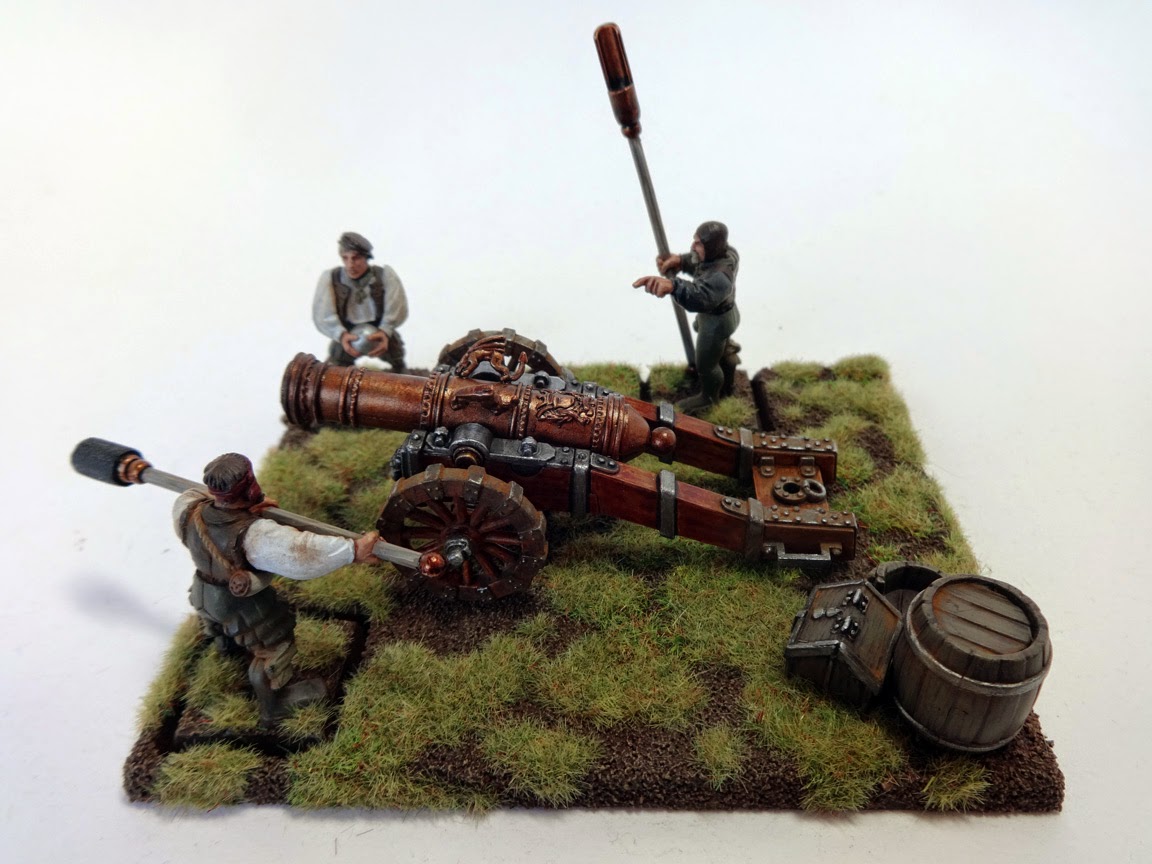 I’ve called it Spitting Lizzie, because of the lizard-things cast on the barrel. If it doesn’t manage a turn one misfire in its first game, I may consider eating my hat.

Anyway, yes. Things! Coming! Very exciting. What scares me is, what will the vampires do once they control the Brass Keep? There’s a big, foul-smelling what next hanging over Hochland, je pense.