By Charlie September 13, 2017
Charlie: Some time ago, I secretly acquired and painted some Necrons for the BFG/RPG hybrid story I'm playing with Jon and Andy. Jon isn't very familiar with 40K lore, which means he gets to discover Necrons much like the rest of us did when they first started appearing in 40K: one horrifying detail at a time.

Andy, conversely, is extremely familiar with 40K lore, and thus when they discovered some seemingly inert metal pyramids in SCY-076, an uninhabited system in the Scyrian Expanse, his face expressed the dread of a man who knows what's coming. 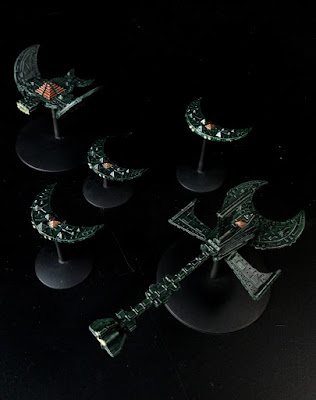 Andy and Jon are both new to the game of Battlefleet Gothic, and thus could not possibly have anticipated was just how ludicrous the Necrons are on the table. They're not unbeatable, but they're certainly not easy to deal with. Worse, they behave completely differently to every other faction Andy and Jon have encountered so far.

I'll spare you all the details of exactly what happened, since hopefully Jon will be writing more entries in his Captain's Log. Instead, I'll quickly run through the extremely lazy simple method I used to paint them.

*I technically used a 4:1 mix of green and blue ink, but whatever.

There you have it, quick and easy. As an aside, I also used this inked metal method on my tiny Dark Eldar warband, albeit with an even mix of blue and green ink: