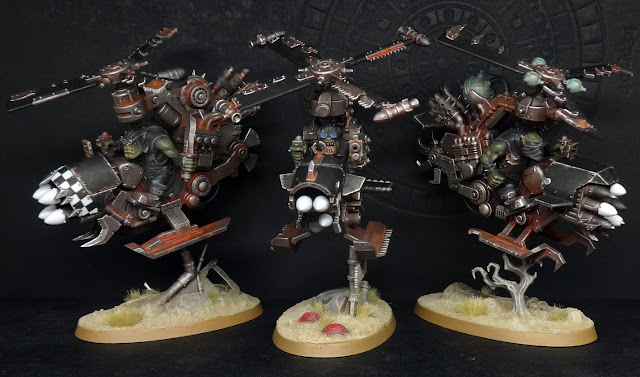 Until now the Metalwaaagh had momentum, but it didn't have speed. As I continue to collect this fledgling army I'm slowly filling out a patrol detachment. I've done my 3 troops and 2 heavy support... now it's time for the fast attack: 10 stormboyz, and a squadron of deffkoptas. Today's post will cover who these idiots are, then finish with how this army's done on Crusade.

Sky Kaptin & the Goffs of Tomorrow

Strapping yourself to a rocket and shooting yourself at the enemy is undeniably metal, so when Sky Kaptin Snodgrin turned up to a Rage Against da Everyfing gig and tried rokkity crowd surfing, his ticket aboard Sirrus Bizniz' next raiding trip was all but guaranteed.
Despite being an ork of middling years, Sky Kaptin Snodgrin is obsessed with helping 'da yoof' gain a sense of purpose and discipline. "Today we is starting a yoof movement," he'd say, "from here to about  forty feet over dere, so long as you don't over-juice yer jump pack." This, of course, would be met with blank stares on account of forty being a confusingly big number.
Snodgrin is also unusual for making actual friends with a grot, a source of significant ridicule by the yoofs under his command. Tattlegit Bommsnik is just as talented in the use of jump packs as his mate Snodgrin, and generally ensures that Snodgrin literally has another pair of eyes in the back of his head (so as to keep an eye on wayward trainees). While Bommsnik enjoys tattling on people, he also enforces discipline himself by waiting for wayward trainees to fall asleep, then finding extremely 'creative' ways of hiding stikkbomms near or, indeed, in them. Many a trainee has lost his cool and tried to skrag Bommsnik, but the jammy little shit always seems to smell trouble, fly away, then wait for the perfect moment to wreak his revenge.

It is said that if you put a drumkit, a mic, and any sort of electric stringed instrument on a stage, then fire a special flare gun, you'll have legendary speed metal three-piece Rotörhead landing on that stage in minutes. This might not be true for orks everywhere, but it's definitely true of anyone travelling in Sirrus Bizniz' warband. Frontork Revvy and his mates get twitchy if they're not doing anything, which means they're generally either rokking or flying. They tried both once, with predictable results. 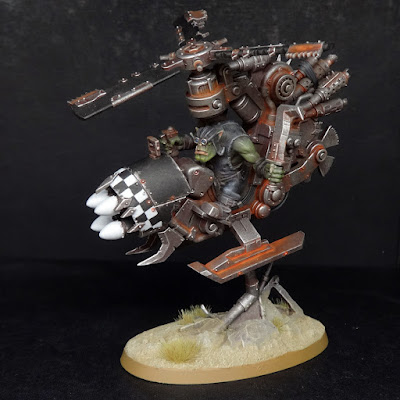 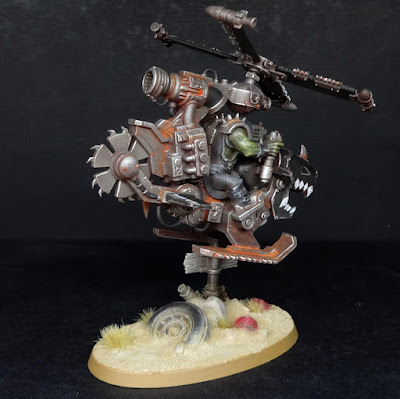 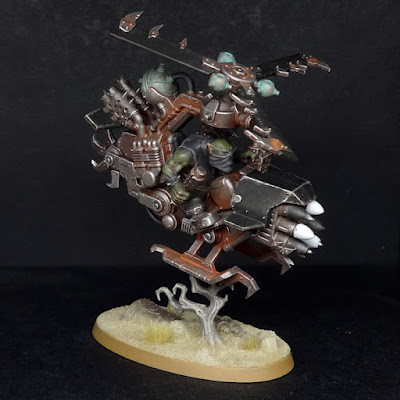 Konversion wurk
The new deffkopta kit is lovely, although unfortunately it comes with a kustom mega blasta and bomb, which is wildly worse than the standard rokkits and costs 5 more points. To be specific: you get half as many shots and a chance to inflict mortal wounds on yourself... all for 1 extra point of AP. The bomb is one of those hilarious one-shot things that does a light smattering of mortal wounds in an area, but it's per unit rather than model, so it'll kill D3 members of a big horde or, potentially, a whole bunch of elite dudes who happen to be standing together. It's such a stupid mechanic that I refuse to engage with it.
I snipped off said crapcannon and then stole the small rockets from the dakkajet kit, stripped them down, and jammed them in the front of the kopta. Absolutely nuanced conversion work. I decided to have it look like a couple of rokkits had already been fired, since why not.

How the army plays & future plans

The concept of this army is to create something that's varied and fun to play against. Much as I love my old speed freaks, it was a very cookie cutter army of bikes and trukk boyz that always played the same way. In contrast, the Metalwaaagh features very few repeat units - so far the only planned repeats are boyz and grots, plus maybe a second deff dread. Everything else is one of a kind, and very different to each other unit. The rough plan looks like this, with everything in grey being stuff I haven't done yet:
HQ
- Warboss in mega armour
- Big mek in mega armour
- Maybe also a puny warboss at some point so people don't have to fight Sirrus every time.
- Maybe also also a weirdboy
TROOPS
- 10 boyz
- 10 boyz
- 20 boyz
- 10 grots
- 10 grots
- 10 grots
- No beast snaggas though, because digitally sculpted fur looks like a sausage wig.
ELITES
- 10 burna boyz
- 5 nobz
- 5 meganobz
- 1 mek
FAST ATTACK
- 3 deffkoptas
- 10 stormboyz
- 1 boosta-blasta
HEAVY SUPPORT
- 1 deff dread
- 1 more deff dread
- 6 killa kans
AIRCRAFT
- 1 dakkajet
LORDS OF WAR
- 1 stompa (to transport the boss, the megamek, the meganobz, and the nobz).

The waaagh so far

The first raid of Ekrete
Army size: 500 points. Games: 2.
Sirrus started out with a raid on Ekrete, an isolated mining outpost in the Andaras system, where Tom's Raven Guard Goff Beakies put up a good fight but ultimately couldn't stop Sirrus escaping with all sorts of loot. He returned to home planet of Boff's Rok and invested said loot in getting a bigger, sexier ship.
Making friends back home
Army size: still 500. Games: 1
Tom and I played again, this time with his Blood Axes. Guluk the Git turned up to a Goff-filled concert and the crowd immediately split into a wall of death, with Guluk's lads on one side, and a curious Mr Bizniz on the other, wondering what these weird camo-boyz were doing at a rok gig. The camo-boyz were ork enough to run headlong at the Goffs, and the ensuing mosh was impressively brutal. Sirrus ended up standing over the somewhat dazed form of Guluk. He held out a hand, hauled him back on his feet, slapped his back, and congratulated him on a good ruck. Guluk was immediately charmed by rok kultur, and the two became comrades in metil.
Discovering wurrbone
Army size: 650. Games: 2
Sirrus visited the Orakork on Boff's Rok, who told him a strange material with "sweet akoostikks" could be found in the debris orbiting an uncharted world in the Reaches. Sirrus set off in a wee gunship, since his shiny new kroozer wasn't finished, and sure enough, in a system the hoomie charts called IOL-9, there were a whole bunch of bitz in the rings around a planet covered in pansie ruins. The white material did indeed have sweet akoostikks, and Sirrus could see there'd be a lot of teef to be had if he could get them put into amps and whatnot. They knicked a whole bunch and made for Boff's Rok.
On the way home, however, Harvey's Ulthwe goff pansies attacked. They forced the gunship to crash land, and started sifting through the cargo hold. When Sirrus and the lads came to express their dissatisfaction, the pansies just shot them with hot wire guns and went back to sifting. Gits. They didn't even take all the wurr bone, so whatever they were looking for, it wasn't even there! Sometimes they do look for those gem-things they wear, but Sirrus hadn't taken any, so it was all a waste of time.
To add insult to injury, Drew's Iybraesil Deathskull pansies showed up right when the gunship was almost fixed enough to take off and zogged it some more, keeping Sirrus trapped on the stupid dusty planet for even longer. Sirrus took this as a sign that the pansies knew he was destined for greatness, and were trying to keep him down.
He did make it home though, because orks is unstoppable. Everyone was very impressed by the wurrbone amps, and agreed they were dead boomy. Thus encouraged, Sirrus went straight back to IOL-9, this time in his newly finished kroozer, and knicked a whole lot more wurrbone. He even fought off an attack by the blue pansies after landing on the surface, then began mining operations to try and knick one of the big wurrbone archways, but it was shielded somehow and wouldn't budge. It did, however, make an excellent bassy donnnnnnng when smacked very hard, so the ladz set up a stage next to it and started using it as percussive accompaniment.
Inaugural raidin' tour
Army size: 800-1000. Games: 3
Leaving a few ladz behind to carry on wurrbone mining operations, Sirrus left in his kroozer to go raiding elsewhere in the area. He went to Alyria first, beat up Maisey's Skitarii tin boyz, then went back to Ekrete, since that went well last time. This time, however, things didn't go nearly so well. Rob's Praetorians and Thomas' Sororitas both gave the Goffs a serious pounding, forcing Sirrus to leave the planet with nothing to show for it. Clearly it's important to attack different places, so the hoomies don't know where to send their troops.

Currently Harvey, Tom, Drew and I are all preparing - a fortnight from now - to conclude the subplot about wraithbone wurrbone. Little does Sirrus know that the eldar were trying to keep him away from IOL-9, and specifically the webway gate he's currently letting rokkers use as a gong during gigs, because it's a path that leads to Comorragh. He's literally knocking on hell's door because it sounds funky, and has no idea.
The racket Sirrus' mates have made so far will inevitably have attracted the attention of the drukhari - it's inevitable at this point, particularly since Jeff's painting an army of them - so at this stage Harvey/Vahlkaer's plan is to fight the orks so hard that they dig in. At least that way, when the dark kin arrive, they will face immediate losses upon emergence. If the orks absolutely slap the eldar, they won't feel the need to dig in, and will probably just leave an inconsequential camp around the gate. If the orks lose, however, they'll get more defensive, and the drukhari will have quite a bracing entry into the Eridani Sector.

I'm having a lot of fun with this army so far. It's also pleasing to have got them past the 1K mark; we'll see what else I can get ready in the next few weeks as Wurr War One approaches. After that, I might do something else for a bit, just for variety. Might even do a few more Cobalt Scions, or... whatever, really. As the mood takes. I can only hope, if you've read this far, that you're having as much fun with whatever you're working on. Ninth edition 40K is crazy complex, and I'm forgetting rules all the time, but I'm really enjoying all this narrative stuff that's been enhanced by this edition.