By Charlie October 10, 2013
We recently had a gaming weekend here in the Beard Bunker, during which I ran two scenarios for our Fantasy campaign. I’ll do a proper story update some time when I have more pretty pictures to accompany the text, but that’s not why I’m here today. Instead, I’m going to talk about something which, had I done it, probably would have been totally sweet. Why didn’t I do it? Because I had a lapse in concentration at a crucial moment. Gutted. But first, here: have a random thing I used to upset Hafnir Stormbourne.

This fella is Gulavhar from GW’s LOTR range; he was used as the thing that lurked in the depths below Karak Hoch. It was a spin on the ol’ Dwarfs vs. Balrog concept, the spin being that this guy can string a sentence together, and had an agenda beyond ‘BURN IT WITH FIRE.’

I spent hours and hours filing, scraping, cleaning, sculpting over the joins in the metal components, pinning the wings, and converting the base to blend the rock stack into the ground with more rocks and filler/foam to bulk out the mound. I then spent no more than ninety minutes painting it. Gotta love deadlines.

So anyway, what was thing thing I done stuffed up? Well, y’see, I had a concept for a scenario that would make a siege fun. For various reasons, Cedric, Dwalin and Stromni’s Wanderers, along with Cara Thiele, Stefan Rainer and the Chancers ended up defending the damaged walls of Koerin from a night-long Beastmen raid.

I painted up a few Empire free company to represent what was left of Koerin’s citizen militia; the rest had been killed before our intrepid heroes arrived to defend the town.

The scenario concept, although I didn’t know it at the time, was essentially the plot of Seven Samurai: a group of experienced warriors arrive in an isolated town/village, and work out how to defend it against a much more numerous but disorganised force. They would arrive at the town in the morning, learn that the beasts would come at night, and have one day to prepare as best they could. It would give the players the chance to think of and then set up traps, or to fortify the massive breach in the town’s walls, or whatever else they could think of. The point was, they’d make a bunch of choices, and then be rewarded for their efforts during the battle. I enjoyed imagining how I'd cope with the situation myself; one idea I had involved covering the ground ahead of the breach with short wooden spikes that would force the beastmen to slow down as they approached, allowing for extra rounds of shooting before combat was joined.

Unfortunately, I forgot to mention the time of day when the characters arrived at Koerin, and so when someone innocently improvised and said it was near sundown, it had already been said. Nothing’s worse in roleplay than telling a player ‘no, actually, your character didn’t say that thing you just said.’ Retcons kill immersion harder than explosive Frisbees kill golden retrievers.

So, with only a few imaginary hours in which to prepare, all the characters could really do was to set up on the wall and in the breach much like you’d deploy at the start of any normal Warhammer Scenario. God dammit.

On the plus side, I did remember to do the other experimental thing I wanted to try: rather than using dice for a stealth mechanic, I wanted to use actual shadows on the battlefield. 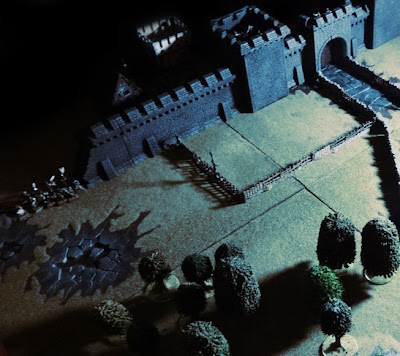 This was achieved by turning out all the lights in the room except my painting lamp, which I positioned at one end of the table, quite low to ground level. The result? Shadows in the moonlight. This gave the beastmen areas of darkness to creep up in, and more importantly, the shadow cast by the wall leading away from the gate gave Cedric a way of creeping out into the field to get in range of the beastman chieftain.

Hopefully, I’ll remember this slip-up the next time I’m running a game. Ultimately, these things are either a success or a learning experience. Hopefully, in this instance, it was a bit of both.