By Charlie November 06, 2013
With a ‘little’ help from Jeff, John and Tom, the Beard Bunker’s Warhammer Fortress is complete! Ha harrrr harrr!

For a number of reasons (most of them involving gameplay and tactical variety) I converted a ruined section of wall. In the interests of spreading the love, this post will provide a how-to for anyone wanting to build something similar, along with a few images of the whole fortress at the end. 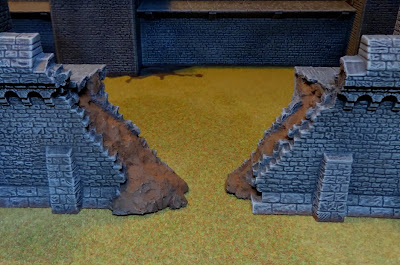 Some people would probably like a giant pile of rubble to go between and around the ruined section (me included) but I haven’t made one yet. One of the side effects of painting something as big as the fortress kit is developing a serious urge to finish the damn thing as quickly as possible.

PREPARATION
I began with some research. It turns out fortress walls were actually full of a mixture of earth and rubble sandwiched between several layers of stonework. OH GOOD, I thought, THAT’S NOT GOING TO BE COMPLICATED AT ALL.

STEP ONE
Do terminal things to an unassembled wall section using a razorsaw. You don’t have to saw all the way through – just far enough that you can snap it.

STEP TWO
Use clippers and a scalpel to take your long, straight line of ruination and cut out individual bricks. You should now have four separate pieces of plastic.

STEP THREE
Using a hot glue gun, affix a rectangle of foamboard to the inside of the wall pieces. Using a knife, carve it to match the shape of the plastic bricks.

STEP FOUR
Stick a second foamboard layer inside the first, cutting out brick-shapes with a knife so that you get two different layers of bricks.

STEP FIVE
Cut a wedge of high density insulation foam to the right thickness to fill the gap between the walls, but don’t glue it. Once you’ve got it ready, stick poly cement on the two halves of the plastic wall (since that takes a while to cure) and then apply hot glue onto the insulation foam. Quickly stick the two sides together before the hot glue cures (which is about 0.0000034 seconds), wrap it up in elastic bands, and leave it to cure overnight, ensuring that all the joins look good before you set it aside.

STEP SIX
Carve the surface of the insulation foam using any point object (knife/file etc) to gouge in and pull away, so that you tear the surface and get nice random shapes. If you’re unsure, have a play with some off-cuts before doing anything to your wall.

STEP SIX
Smear filler (I used ready-mixed Polyfilla) over the ruined section. This will provide bonus texture, and allow you to make the foamboard bricks look less like ass. I found a straight, flat file helpful for giving the bricks a solid shape.

STEP SEVEN
Once the filler’s dry, prime it by hand (primer spray will dissolve pretty much all of your work). I used black emulsion paint to seal it, and then went over it with Chaos Black spray just to ensure a consistent tone. 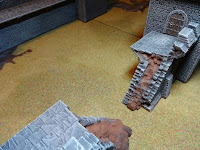 And now, in case you were wondering, this is how far across a six foot gaming table a Warhammer Fortress can get with one extra tower:

If you hadn’t guessed, the main purpose of our fortress walls is to provide a backdrop or setting for our games, rather than for actual siege warfare. I wanted town walls, not a proper keep. In fact, you can make them look even more like town walls if you take out the towers: 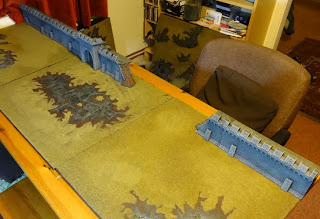 Note that three of the five towers have been assembled for straight sections rather than corners.  This didn’t require any conversion; the kit doesn’t force you to build the towers in any given format. Just make sure you’ve got plenty of big elastic bands to hand when you’re leaving the poly cement to dry – that goes for assembling both towers and walls.

Having that one extra tower allows for a fair bit of variety. Below are two of the many ways I can lay this thing out on a table... 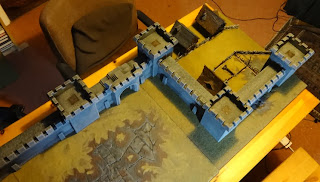 And there we are. Hopefully this has been helpful for anyone with plans on building their own castle. If there’s anything I haven’t covered, shoot me a question in the comments!