Once in a Bloo Moon

By Charlie November 12, 2013
Approximately ages ago, Cedric Sneakfoot sent the entire Bloo Moon tribe packing with a single, general-slaying shot. There was much squabbling in the wake of Big Boss Isitt’s death (by which I mean, it’s taken me ages to get around to painting a new warboss for the Night Goblin army Maisey so kindly bequeathed to me).

Well that new leader has finally emerged. Smaller, more pot-bellied, and even more brain-damaged, I give you... Big Boss Skazwuzzle! 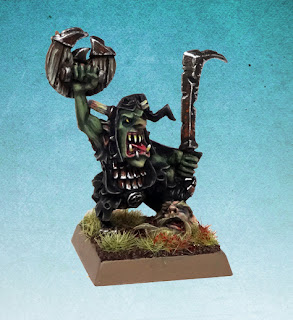 What he lacks in martial prowess he more than makes up in an amazing ability to dodge the bullet. He’s a masterful delegator, buttering up his lieutenants so that, when an enemy warlord bellows a challenge, Skazwuzzle will think nothing of giving his second-in-command an encouraging nudge and a whisper of, ‘Go on you slag, you can take ’im!’

This is, the more observant Bloo Moons note, the most common way in which Skazwuzzle’s rivals meet their demise. 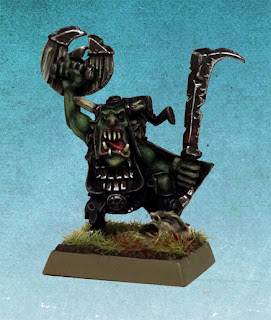 Relative to the tiny size of this model, I spent bloody ages painting him. This was partly because he’s the only goblin I’ve ever painted, and as such I wanted to take my time. Secondly, it was because there were a few techniques I wanted to try. One was blending pinkish flesh tones into the skin highlights – greenskins still bleed red, so it makes sense to me that you’d get a normal flesh tone where the skin is thinnest. Sadly my efforts in this department have been largely annihilated by the harsh lighting of my photography. Oops! 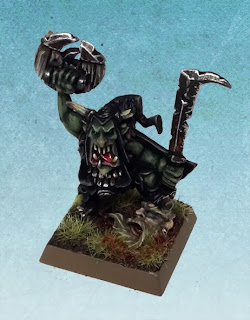 The other thing I wanted to try was to do a wolf-ish pelt on the fur cloak that changes colour, from grey to brown. I find this easy on a flat surface, but on an area with so much detail was a fun challenge. 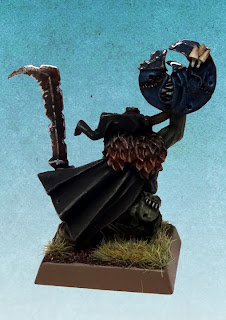 As befits a tribe as useless and low-rent as the Bloo Moons, Skazwuzzle’s equipment is nothing but light armour, a hand weapon, and a shield. He’s the general of my army, and he only costs 34 points. Genius. 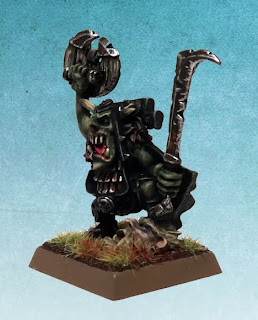 Anyway, that’ll do for today. Perhaps I’ll do more for the goblins at some point. Squigs are hilarious, as are trolls. Basically anything that can go disastrously wrong. Weeee!