By Maisey July 30, 2018
When you regularly play with the same group of gamers you tend to get used to what everyone else has in their collection and when something new comes along we tend to talk about it long before it ever gets to the gaming table. Sharing your excitement with your friends is part of what makes the hobby fun. The shared enthusiasm is a good motivator to continue painting, collecting, and gaming.

However, sometimes it's also fun to do something in secret.

There is a joy in casually sticking a brand new and unexpected unit down on the board during deployment. Watching your opponent's facial expressions pile up in a mess of confusion, recognition, panic, excitement and surprise is one to behold. So with the recent Nerd Thunder I knew I had to do something special.

Several ideas went through my mind, including a Chaos Renegade Knight. But when Charlie offered up a box full of Space Marine spares, including a bunch of tanks I knew what I must do. An Iron Warriors Spearhead detachment. 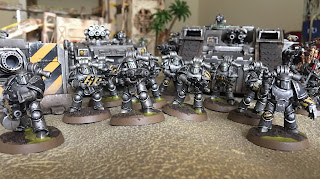 It was perfect. It would be fairly quick to paint. It would provide a good balance to my infantry heavy Thousand Sons army. Plus I've always liked their cold, brutal, and utterly callous behaviour. They sit in that properly scary type of evil, the calculating and logical kind. The crazy blood lust type of thing has never really appealed to me. 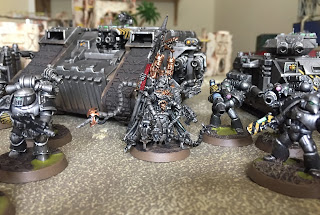 The Iron Warriors also gave me a chance to do the more understated type of Chaos. I never liked the super ornate, Gothic, look for them. I went with using the Mk3 armour for the tactical squad and it's plainness just fitted better. All the tanks are just stripped down and plain. To me the Iron Warriors just don't seem like the type to collect trophies, random bling, or include anything unnecessary on their weapons. So I kept it simple. 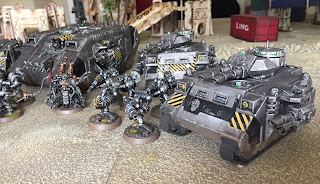 I also loaded down the list with as many Lascannons as I could, because Yes.

I actually spent more than a couple of minutes on the basing of these guys. It was tempting to do them in the same desert scheme as the Thousand Sons, but I decided in the end to do them in something that suits them. A toxic mud bath. Seemed fitting. This was Stirland mud built up into piles. Nurgle's Rot for the sludge pools. Then some dry brushing to finish up.

The chevrons where mostly free handed for the smaller areas. I find it best when free handing is to paint the whole area black then slowly, using thinned yellow to carefully paint the middle stripe of yellow. Once that is nice and solid I use that as a guide to do the adjacent stripes. The larger stripes were masked with tape to get them nice and neat. 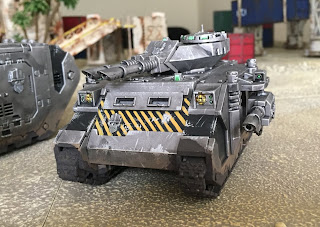 I've only managed a couple of games with them so far. In Nerd Thunder they managed to hold up Jeff's massive Blood Angels armoured column. I've been especially impressed with the Havocs. They've been pretty deadly for their size. 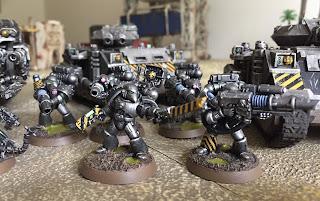 In terms of balance, on their own they will suffer, but mixing them in with the existing Thousand Sons units they compliment each other nicely. As Charlie found out when I halted his mechanised Imperial Guard army recently. 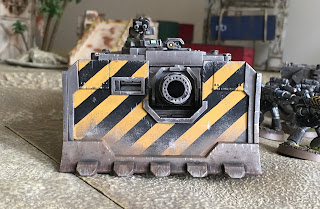 In short, totally worth the effort keeping this lot a secret to drop on the table at the right moment.