By Charlie July 17, 2018
Today we have a kitbash of the Ortan Cassius model from Deathwatch: Overkill to turn him into a captain for my fledgling Deathwatch Kill Team. If memory serves, the head is one from the tactical squad box (if not, lemme know in the comments and I'll edit this!) and the sword is from the Grey Knights set. That technically makes it a force sword, but zog it, I like the look of it and fundamentally it's a sword with a techy bit to tell people to expect power-stabbing.

Other than that, conversion work was pretty minimal. I considered removing the purity tassles, but they're integral to other elements of the sculpt like the chain holding the book, so instead I altered the character concept slightly to explain his proliferation of devotionals and oaths of moment. There are a few elements of the paint job which didn't go as planned, most brutal of which was his left eye. Ye gods. Painting 28mm eyes scares me at the best of times; I can barely see what I'm doing, but tiny mistakes with facial details give the model a derpsome visage. If things go wrong, I'll just repaint and retry a few times, but whilst the right eye went in first time, the left took a fury-inducing 9 attempts to get something sub-par. At that point I accepted this was the best I'd manage without filling his gods-damned eye socket with acrylic. 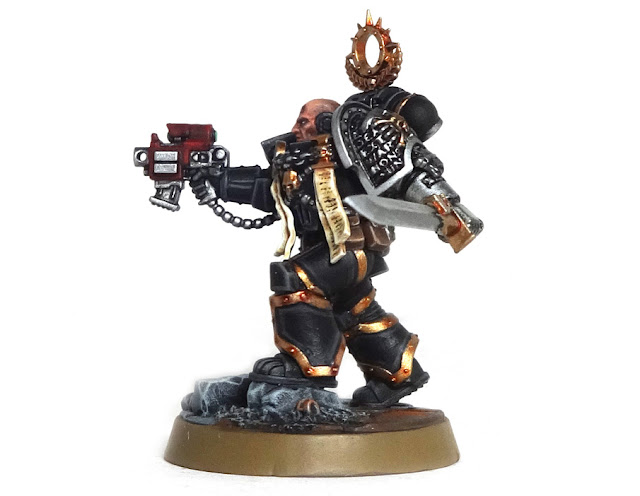 On to the character of Lucius Decimus Valerian. He started out as the classic initiate of Ultramar, the tenth child of a Macragge family blessed with the qualities needed to become post-human. In time he became one of the 3rd company's best squad leaders, a master of small unit tactics. With the hopes that he could spread this brilliance to the rest of the company, he was promoted to the rank of captain when the position became vacant.

Valerian might have been a master of tactics, but in his first campaign as Captain of the 3rd was disastrous. Brothers were lost without gain. Objectives were not met. Valerian, it seemed, had been promoted beyond his talent, and when it was suggested he step down, his pride got in the way. He was determined to redeem himself, promising that he would fare better in his second mission.

That Calgar and others had not understood the depths of his strategic inability was an embarrassment for the chapter, and demotions were rare enough that it was an unappealing prospect in terms of chapter morale. Worse, Valerian was too proud to relieve himself of command. In the end, Calgar found the ideal compromise: give Valerian the honour of joining the Deathwatch. Valerian knew it to be an honour, but could guess the reason for it. During the departing ceremony, where much pomp and grandeur was arrayed around him, he felt nothing but shame. Deathwatch captains command a far smaller number of assets. Consequently Valerian excelled, and the Ultramarines were thanked for sending such a high-ranking recruit. Valerian, however, thinks himself a fraud. He never speaks of his time as captain of the 3rd, and sets himself near-impossible goals in missions, making those under his command wonder what it is he's trying to prove. His armour is usually covered with oaths of moment and devotional prayers written in the days leading up to a mission, most of which will then be torn from his armour during the ensuing violence.

Whether or not Lucius Valerian will ever live up to his own standards remains to be seen, but as far as the Deathwatch is concerned, he is welcome to remain a captain in perpetuity. 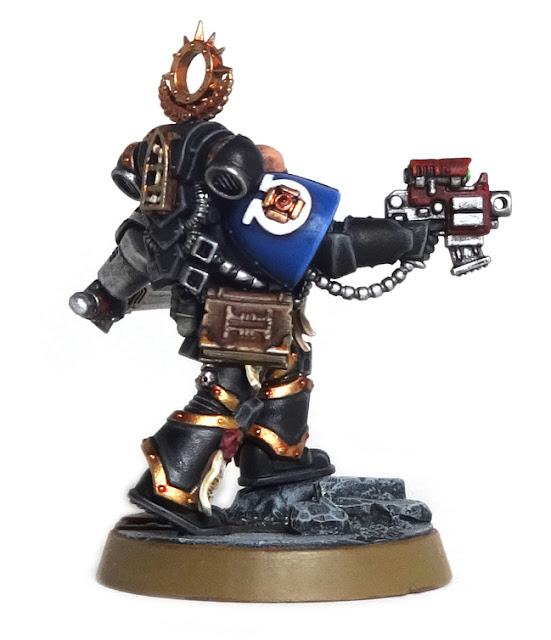 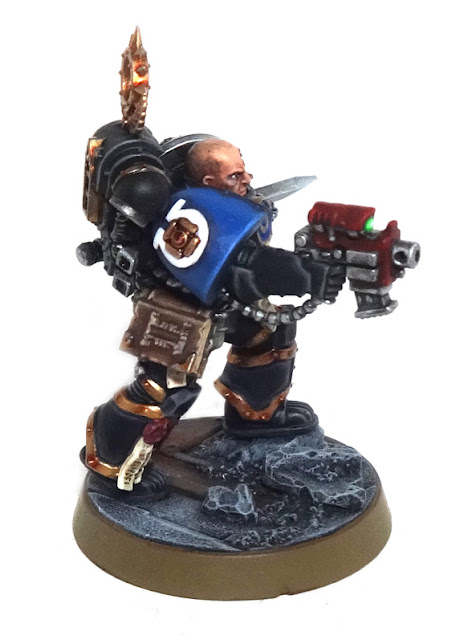 With Valerian painted I can now use these guys in 40K as a patrol detachment. Kill Team also has me weeing myself with anticipation, so naturally I'm feeling rather pleased that I happen to have painted a workable squad right when GW happen to announce the perfect game for them. Good times.