By Andrew March 11, 2019
Sometime perhaps in the not too distant future, I believe the Bunker will be returning to the Old World, to continue our adventures beyond Hochland, Fort Schippel, Hergig, and the comically named Bergsburg. 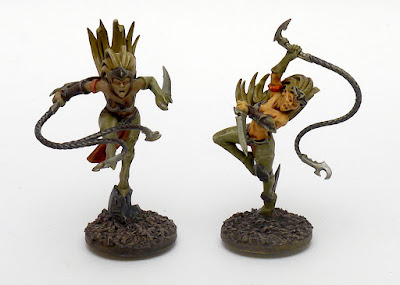 On their return, I'm hoping there may be a delicious added threat to venturing anywhere near a tree, because of course anywhere in the Empire really needs more reasons to fear woodland other than Beastmen, Undead, Skaven, etc, etc.  Coming soon to a forest near you, the very definition of proactive environmentalists;  pointy-eared, super-snipering tree-huggers who consider armour to be an affectation of those too slow to dodge whatever the others throw at them.

The Wood Elves (WElves) are a force with a very nice theme and some extremely good looking and evocative models (I'm looking at you Dryads, Wild Riders, Treemen...);  Wardancers are not part of that list however.

Very much a product of their time, and with an amazing dynamism, their proportions don't quite work and the weapons seem drastically oversized.  I considered a lot of alternatives before finally settling on GW's Wych Aelves (or something like that).  They've got the dynamism the unit deserves, are suitably un-armoured, and I quite like the whips as a physical representation of some of the Shadow Dances of Loec. 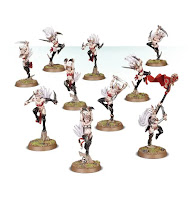 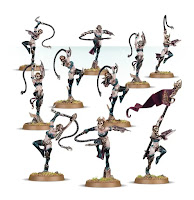 What doesn't entirely fly is the thigh-high boots and underwear bondage look.  My green-stuff skills are just about up to fixing that, so hopefully now they look more like they are wearing leggings.  The right paint-job (basic though it is), and I think they're now ready enough to take to the field.

So far they've had their basic colours applied, Death Guard Green for the cloth, Rhinox Hide for the leathers, Some-Very-Old Orange as a spot colour, and a selection of skin and hair colours.  They then receive an all over drybrush of Terminatus Stone BEFORE a wash of Athonian Camoshade (GW always get this wrong in their painting guides if you ask me).  The skin then gets an extra wash/glaze of Reikland Fleshshade to richen their tone.  It's the same recipe I'm using over the whole army - quick, simple, and should provide a degree of unification.

In time, I'll return to improve the highlights, fill in the details, and generally bring them up to higher level that I'll feel happier about, but in the interests of achieving a playable army shortcuts have to be made.  Although they'd previously been spray basecoated with Death Guard Green, it took only a few hours to get to this look which I'd say is acceptable for gaming, and pretty efficient time-wise.

Right, back to the basing mines, because leaving it till you've got ~100 models and movement trays to do is definitely the least soul destroying way to do your bases... FML.