Like a bad rash that keeps returning no matter how many times you visit the GUM clinic, I’m back.


In my last post, I showed how I’d built my Chinork. It basically said 'I just built it'. The time came for me to paint the thing, a slightly tougher feat.


The plan for the nascent Blood Axe contingent of my army is that each vehicle will have its own camouflage, so the first thing I had to do was pick a camouflage pattern. I wanted to pick camo patterns that suggest that the Blood Axes understood how camouflage looked, but not necessarily why it worked. The 'Unifying theme' of the army will be its various gaudy patterns.


So I trawled Google looking for inspiration. I didn't start with much hope, I mean what modern military service would pick a truly stupid camo pattern for their aircraft?


Turns out the RAF would. Presumably this is the camo they use when fighting in a tiger infested war zone?


Having selected the paint scheme, I painted it. Rather than write out in long hand all I did, I’ll just do it in list format and expand on one or two sections.

1. Camo Pattern and engine masked off

I masked the camo design with Panzer Putty – a seriously great product for masking non straight camo patterns, which is pretty much everything with the exception of more modern geometric designs and ship dazzle camo.


It is important when using Panzer Putty to work relatively promptly and to prevent the putty from getting too warm, as it will move a little under its own accord, especially when warm.


When masking, it’s important to remember that you’re effectively masking in inverse, so remember to put your ‘top’ colour down first, and then mask what you want to keep. Also, take the time after spraying the top coat to make sure you’ve got all the Panzer Putty off – its easy to miss bits here and there as it snaps when removed.

Airbrushing creates very thin layers of paint and these can be more delicate than layers of paint that have been brushed on. Gloss varnishing after applying base colours goes a long way towards protecting the paint. It also helps with subsequent steps that require flow or capillary action like pin washes, washes and filters.

This basically involves using a small section of sponge dipped in paint to create a random 'chipped paint' effect.
On darker models, the Calthan brown improves visibility. Keeping the mix non-homogeneous also helps to show different ages of chips. The grey ones suggest bare, un-oxidised steel (these will be the newest) and black and dark brown ones will be those which have been around longer and where the metal has fully oxidised. For lighter (as in less heavy) or more technologically advanced vehicles consider chipping with a very light (nearly white) grey or dull silver as this will suggest the underlying metal is aluminium (or titanium, I suppose) rather than steel. Mad props if you can convincingly suggest carbon fibre (with its weave pattern) underneath.


N.B. It’s important to focus chipping on high wear areas. Models with lots of even chipping everywhere or very heavy chipping in certain locations can look stupid – there are parts of a vehicle that receive more damage over time than others. Take a domestic car: the front splitter / grill surround, front quarter panels, sills and protruding wheel arches will receive most wear and damage over time from flying stone chips, small road debris, careless cyclists etc. In contrast, It’s pretty uncommon to get stone chips on the roof of and on the boot lid. The same is true for tanks and military vehicles.

I’ve found that by diluting commercially available oil based filters (I used AK 263, dark wood wash in this case) and airbrush spraying them, you can kill two birds with one stone and do both pin wash and filter with the same application, particularly where you have a lot of detail (like on most GW and FW kits and components).
Also, if you let some darker oil based washes pool they leave behind a residue that looks a lot like rain washed dirt and mud – particularly effective for the underside of models, although practice this in moderation!


The difficult part of this process is not over-doing it – something I don’t always get right. It’s easy to end up with a very powdery, chalky appearance on the model which doesn’t really look anything like rust decay or weathering and that obscures rather than promotes the main paint job .

I tend to do ‘light’ dirt weathering with a mix of matt varnish, weathering powder and water; which I apply in thin, watered down coats. Be careful with this as I’ve found that using water as a carrier can occasionally turn the finished effect a bit ‘weird’.


For ‘heavier’ accretions of mud and gunk I’ve traditionally used dilute PVA to stick it all together but more recently I’ve moved to AK’s pigment fixer.


And this is the finished item. I had trouble photographing this model partly because I was out of practice but also because I struggled to get a lighting level that both illuminated the core of the model but didn't obliterate the rotors in the exposure.

I painted a couple of Deffkoptas that had been hanging around (for six years (Erk)) in the same pattern as escorts. 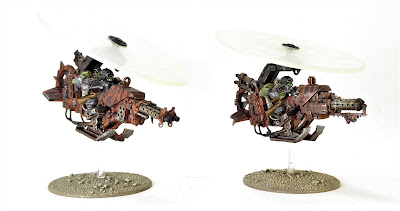 Now to paint me some Kommando’s to ‘Get to dur Choppuh!’ Do I follow suit on their choice of camo pattern?