Heroes of the Revolution. Genestealer Cult #12 - Kellermorph and Locus

By Jeff July 27, 2020
It had to happen. We all knew it was coming. I had just two models* in the entire Genestealer Cult range I did not have painted. It was kinda inevitable that my completionist urge would combine with the final release of the Kellermorph and complete the army once and for all**. 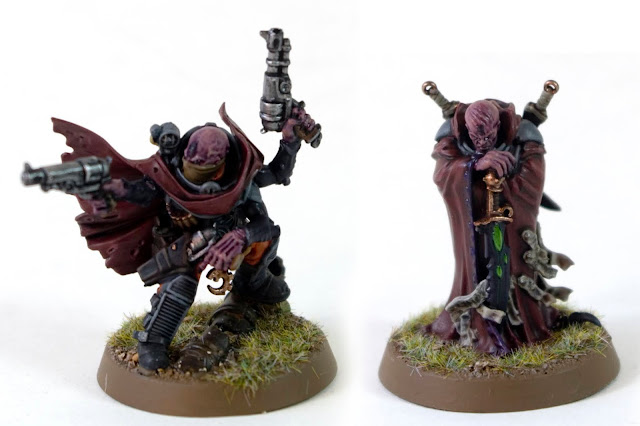 It was weirdly refreshing to jump back into painting some GSC lads. After 3000 points of these nutters I had the scheme down so just a nice simple job. Let's take a closer look at these two hombres starting with the Kellermorph: 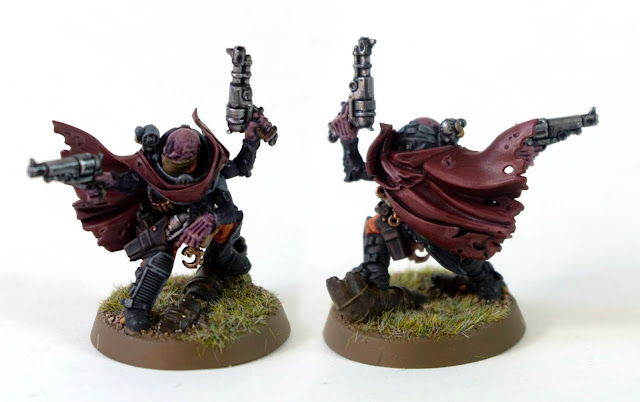 I love the sculpting of this model, the flaring cape, thrown back to quickdraw his three pistols is especially awesome. In the lore he's supposed to be a sort of "people's hero" righting wrongs Zorro style. I'm not sure that works for the Starborn Souls' backstory but should I ever need a character assassinating gunfighter he's now right here. I deliberately kept the painting very simple on him. I wanted him to blend in to the rest of the army. To hide in plain sight until his moment to reveal himself and blaze away (seriously: 6-12x S4 D2 hitting on 2's? Filthy). To that end he recieved the standard Ortag Imperial boiler suit and pressure armour combo with the primer red cape that will allow him to hide among my industrial scenary I'm working on. 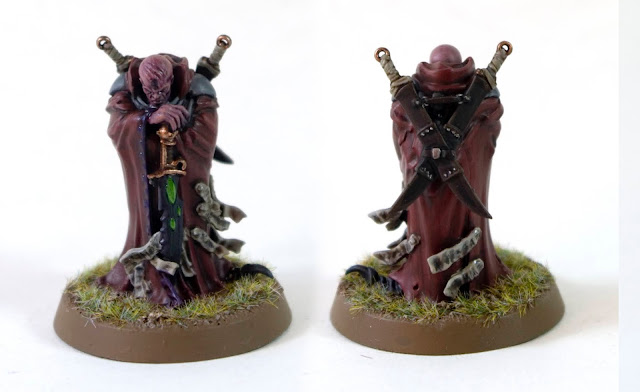 His buddy, the Locus, is almost the exact opposite of my feelings toward the Kellermorph. As a bodyguard he'd fit right in, but I was almost completely unimpressed by the sculpt and the rules for the mini. My completionist senses were screaming though so I set out to make a Locus I could love. First thing to go was that back-banner. Beyond making it tricky to go through doors, it seemed daft to have a big "look at me" on the bodyguard trying to seem unobtrusive. I also went for the "hood down" look as the scarred head was too cool not to use. I also replaced the "neurotraumal rod" with the bonesword that comes in the kit. I kinda wish I'd shaved off all the flutting papers because... what are they there for? Providing movement to a model exuding static patience? I dunno.

Given that painting this model was largely "pick a colour for the robe" I thought long and hard about it. Initially I had thought to use the purple that I'd used on the Magi, but that seemed wrong for something that is supposed to be lower status. In the end I plumbed for Ortag Imperial red again as it would bind the model to the army. Now, I've mentioned that neither of these models give me massive excitement to use in the 40k army, so why do I have them? Beyond completionism I mean. I think these two will make perfect representations of the two leader options for Necromunda genestealer cult gangs. So while they are technically part of the Starborn Souls expect to see them most often in the twisting depths of the Underhive.

And that's it. The Starborn Souls are done**, really done**. Feels weird! What about you? Do you ever feel like you "finish" a project? Or are you how I normally am, finish scaling a peak only to see more mountain ahead of you full of exciting variant projects? Seriously, I'm still planning stuff for my Blood Angels after 7000 points. I've got problems man... Until next time, lovely people.

*Except for the Tectonic Fragdrill which may one day make an appearance but... meh.
**Except obviously there's going to be a Brood Brothers contingent one day. But that I am considering a seperate project. Honest.