By Charlie July 06, 2020
Inquisitor Greyfax is one of those miniatures designed to convey the technological contradictions and iconic weirdness of the 40K setting. Unfortunately for my tastes, it actually goes too far. A crossbow attached to an assault rifle has a comedy charm, I grant you, but a candle on one's hat is asking for trouble, particularly when the hat is taller than the candle. If the hat doesn't catch fire first, there'll be wax running off the brim and giving poor Greyfax the look of a rock that's had seabirds nesting on it for a while. Perhaps it's a known trend in Imperial fashion: guano streak. And finally, we come to my favourite bit... the stiletto heels. Supporting the weight of power armour.
This should probably make everything except concrete qualify as dangerous terrain.
Suffice to say, I have once again returned to my classic hobby haunt: turning Games Workshop's output down to maximum volume. Behold the fruits of my partially successful labours: 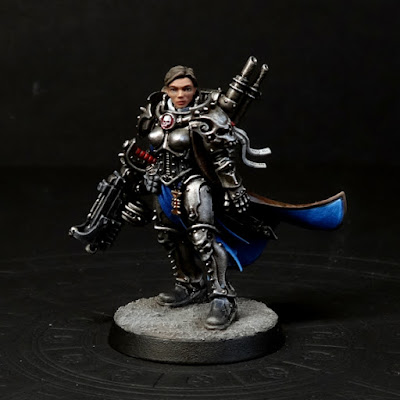 Skulls, a corset, and power boobs... yeah, arguably it's still over ten. And I say 'partially successful' because originally I wanted to sculpt sabatons with a ridge that would be visually sympathetic to the style of the greaves; round-topped armoured boots would have looked weird beneath the ridged greaves. I had a good crack at it, but just couldn't get them to look symmetrical or, indeed, un-crap. In the end I yanked the eject button and sculpted very plain boots instead. I imagine they have steel toe-caps and are generally reinforced, but the rubberised surface conceals the joints.
I chose to sculpt wedge heels rather than flats because the character is a haughty woman for whom additional height will help the giant suit of armour look that much more imposing, and look, this is not the miniature on which to attempt "practical-looking female power armour." As an aside, bravo to GW for finally sculpting a woman in less gendered power armour! I'm referring, of course, to the Inquisitor Draxus sculpt. The increasing variety of styles is pleasing, both because the galaxy should be a varied place, and because it's fine for some people to dress in a very gendered way so long as that isn't the only way that gender is represented.
Anyway, back to this Greyfax conversion. Lore-wise, the suit itself is actually a suit that was salvaged from a ruined Sororitas convent following a mission to the Diaphone system. Following Nadiya Zelenko's promotion to being Inquisitor Drake's Interrogator, I figured I'd celebrate with a major kit upgrade. Here's hoping she doesn't die in her next mission, leaving me looking at this miniature while a single manly tear rolls down my face.
The Conversion
Before I could even get at the boots, I needed to swap out the head. The original miniature of newly-recruited Nadiya was from Statuesque Miniatures, so using one of their head sculpts that was semi-close to the original mini seemed like the best way of getting some consistency.
Since part of Greyfax's collar/neck was stuck to the head component, I needed to sculpt it from scratch. I pinned the head in place and sculpted around it. 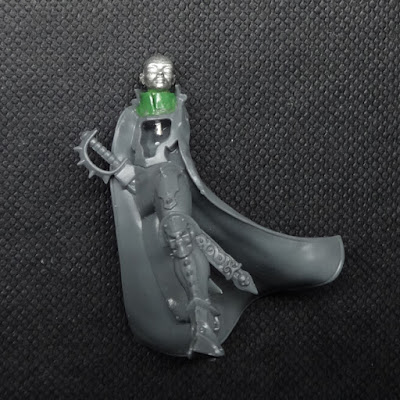 Next up, I stripped down the condemnor boltgun so that it went from being a crossbow to a speargun. I sculpted a couple of tiny rivets onto the sides of the big not-an-ironsight thingy, and then got to thinking 'what is this thing for?' ...and came to the conclusion that it was a comically elaborate mount for a laser sight: 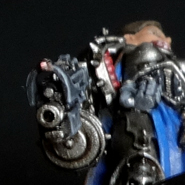 With all that out of the way I could snip off most of the shoes, then pin the mini to the base with some long pins running up the calves, and green stuff packed into the base's underside so that the pins had plenty of reinforcement to prevent getting bent off the base. At this stage I also applied some thin armatures for the feet so that the putty wouldn't be sliding all over the place when I came to sculpting the boots proper.
As mentioned in my intro, the sculpting of the boots didn't go well. My attempt at making sabatons looked like floppy fail. It seems I still suck at sculpting mechanical parts. Falling back on my old comfort zone of smoother shapes, I sculpted plain boots on.
Finally, with the mini very securely on the base, I could go about sculpting the hair. This was simple enough; I've had enough practice at this that I find hair pretty easy, as long as I remember to give it the right volume and weight. 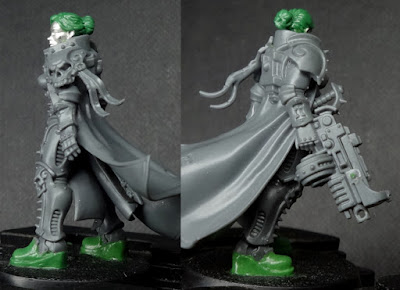 Painting
As is often the case, I went for maximum effort on some bits of the paint job, then totally phoned it in on other parts. The metal in particular was pretty slack, consisting as it did of my now standard metal mix:
The blue tabard/lining was a more careful series of layers of various Coat d'arms and Army Painter blues, layering up, glazing down, and layering up again. The browns, similarly, were a combination of Vallejo, Coat d'arms and Army Painter colours, such that by the time I finished, the cloak was about three different levels of matte/gloss, which looked sub-optimal. I threw a layer of pure Lahmian Medium over it to get it consistent, which was successful in that it was now consistent...ly glossy. Ah well. Might need to throw some dullcoat at it at some point, but it'll do for now, and I'm happy with the colour itself. 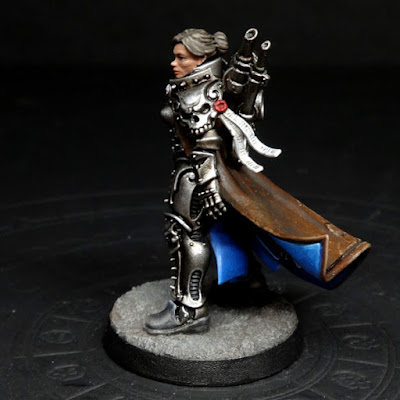 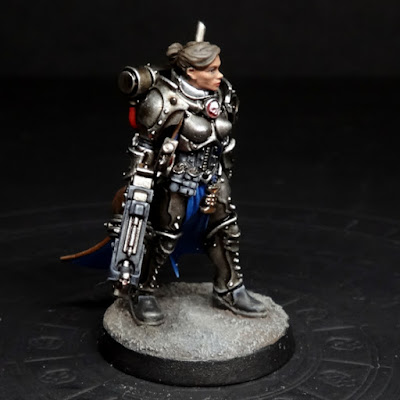 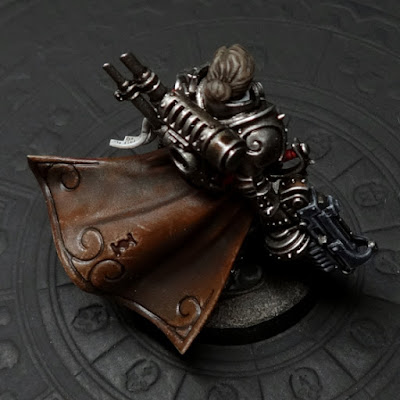 Basing: why so plain?
There's something ridiculous about putting all that effort into a mini only do throw down this basic bitch base, but it needed to be consistent with my other Inq28 dudes, and needs to look OK on urban/indoor maps, since being out in a field is pretty rare during Inquisitor roleplay. Were I painting this mini in isolation, I would have gone for a light brown or possibly sandy base with more visual interest, since that would've contrasted much better with the dark brown, blue, and silver.
But who is this character?
As with all the agents of the Cetus Subsector, Interrogator Zelenko's bio is on the Beard Bunker's wiki. Her page is here. We're actually in the process of improving and enlarging some bits of the wiki, including our maps, so I'll put out a post about that when we've got the bulk of it done.