Mercifully, I had some lying around from previous bursts of Bolt Action enthusiasm in the form of a box of Warlord's Bolt Action Commandos. One of the nice things about Bolt Action is that honestly, most of an army is handled by a single £30 box. It's intensely affordable as a wargaming side hustle. Now... one of the reasons I love WW2 gaming (and historical in general) is that I am a massive history nerd. I loves it. When I was starting to think about this article I realised I was planning thousands of words of deep dive Commando history... that wasn't strictly necessary. So. With gritted teeth I am just going to say: The Commandos were a volunteer-only, highly trained, very, very interesting force of raiders designed specifically to make the Nazi's life hell. Seriously, German freindly fire rates rocketed during the period of the Commando raids, so nervous were their sentries.

I will now turn you over to wikipedia and let them do the history bit. From here on in I shall just do odd sentences of history and then talk about the models and the painting, I'll do little links to encourage extra learnin'. Otherwise I shall get absolutely lost in a soup of fanboy history talking. Heck, Hitler ordered that any commando captured regardless of the uniform was to be executed as though they were a spy, they were that scary... [TANGENT KLAXXON] Fine. Fine, I'll get on with it...


I've built the army around a single "Section" of Commandos. They were what would fit in a single Assault Landing Craft and broadly resembled a platoon. Because the arrangement of weapons in that section is a little odd for wargaming purposes - two 15-man sub-sections that further divided down - I chose to make four little squads. Two of them set up to be the "assault" element of the sub-section, the other two being the fire-support "gun" elements. The assault elements are equipped with a pair of Thompson SMGs - that staple of gangster movies - that were brilliant but very expensive weapons. Assault 1 also has some anti-tank grenades because seriously, I'm a bit light on the old armour penetration.

The basic painting for any British infantry is very, very simple. Get the biggest brush you can find, open the Vallejo English Uniform and slather that on. We did not go in for terribly complex uniforms for the most part (although I'm planning some Paratroopers that will be the horribly detailed exception to that rule). Pick out the webbing in Khaki and the rifle furniture in Beige Brown then just drown the whole thing in Agrax Earthshade. Go back in and do a couple of highlights and you are 85% of the way to finished on any British project.

The gun elements of the section are equipped with the ever-so-good Bren gun (seriously, we were still using it in the 1980s) as their light machine gun. It's fair to say that if these were firing the raid had "gone loud" somewhat. I also stuck a Sten SMG in there, the cheap as chips emergency alternative to the pricey Thompsons. As is usual for Maisey and I in our Bolt Action-ing I rather nerfed myself in force selection. I could have had a lot more SMG's; more machine guns; all sorts. But I didn't take them because that's not what Commandos had. Bolt Action allows you to do WW2 almost as sci-fi in places. Want a whole regiment of King Tiger tanks despite the fact that there were only 492 ever made in the entire world? Well, you can. I prefer to take a more re-enactment vibe.

Continuing the painting process, next comes all the metalwork. I do this in a mix of Gunmetal and Black for that "heat blued" protective look. This then gets a black wash. Now it's time for the backpacks which are in a weird almost wax-jacket green. When figuring out colour schemes I've found an invaluable resource is re-enactors. Those folks are fanatical about getting the right shade. I, on the other hand, used German Dark Green as the only one I had to hand. Helmets and other painted metal objects go Bronze Green and then get the camo nets drybrushed in Khaki and the strips picked out in Olive Green and Khaki. The iconic green beret gets painted bottle green using Caliban Green.

You'll notice a selection of headgear on my commandos, this is completely legit. They would usually wear soft hats on night raids as nothing will clink against a wall or similar. Steel helmets don't protect against bullets anyway, they're for stopping shrapnel and debris from shelling. If artillery is involved the mission has gone somewhat sideways. I mixed up helmets, cap comforters (the wooly hats), berets and even some Scots Tam O'Shanters to give the army an eclectic, irregular feel and to make them seem appropriate for most circumstances.

Supporting the advance - or more usually the retreat once the objective was achieved - we have the ubiquitous 2" mortar. There are reports of some nutters using these like grenade launchers with them braced against walls and trees, but normally they're for raining unpleasent, explosive party favours on people. I used the traditional kneeling poses for this as I didn't want them to look too gung ho.

For early war engagements, anti-tank support is provided by the Boys anti-tank rifle (named for Captain Henry Boys not as in a kids weapon). This thing is essentially a monstrous bolt action rifle, yeeting half-inch wide bullets at things at unbelievable velocities. It relied on pure physics to do damage and was nigh-on obsolete at the start of the war. In a war where the Germans were using disposable explosive warheads called Panzerfaust, we were using a big bullet... The Warlord kit doesn't have any Boys AT rifles in it, and they bizarrely don't make a metal model for it despite it being in the list. So I salvaged one from an abortive 8th Army project (Perry Miniatures plastics). I converted it onto a commando arm that normally holds a Thompson (needs a pistol grip see) and supported it with one of the Lee Enfield rifle arms. Fortunately, Britain doesn't have to rely on this for man-portable anti-tank for the whole war because we developed...

The PIAT. Which looks cool until you realise that it is a spring-loaded anti-tank weapon. No, really, spring-loaded. Worked great, really nice warhead, just scarily short range. I got a bit excited modelling it and decided I wanted to drill out the barrel. The kit part sensibly comes moulded as solid but with some dextrous and nerve-wracking drilling you can open it up so it looks like it should. Oh, and those tubes the loader is carrying really were made of cardboard in real life. In these shots you can see the arms so it's worth mentioning: You need to make peace with transfers if you are going to paint Commandos properly. Why? Because this is the insignia of the Royal Marines at the time: 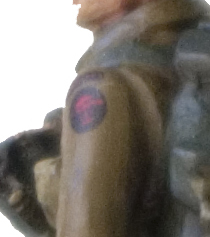 Good luck painting that. Instead, Warlord helpfully produce a sheet of decals that allow you to get this complex pattern on to the arm painlessly. Well, painlessly if you know how to transfer. Mercifully I did a guide for this on my old blog an age ago (I checked, nine years some crazy how) so you can make friends with the dreaded decal and make your painting life a ton easier.

If the explosive support weapons seem a touch unsubtle for Commandos then I have the boys for you. The sniper team above takes advantage of one of the random models Warlord put in the HQ blister and has led to Maisey and I coming up with a fun scenario rule. The regular sniper uses his scoped Lee Enfield like normal. Takes the usual loud-but-accurate shots. The chap on the right is using the amazing De Lisle Commando Carbine that is pretty much the nearest we came to a truly silenced weapon that wasn't a limited-use Welrod. In game I can chose to either take the benefit of the normal sniper rules or take a regular rifle shot that will not be heard by sentries. Should make for some cool gameplay.


Because I rather expect casualties and because anyone wounded and left behind is getting shot... I really wanted a medic. Plus the Commando medic model is cool, he's got the nifty folding bamboo stretcher, is still equipped with that Fairburn-Sykes knife sewn onto his trousers and even has a cute little enamel mug that I might have gotten over-excited painting. Lets be fair, no mug of this design has ever not had a chipped base... I had to, see?

Not all Commando missions were raids of course, once the invasion of Normandy happened they were acting as elite support for regular Army operations. As such, having forward observers to call in aircraft or artillery support becomes a valid thing. Heck, even some sneaky missions could benefit from having a Navy gunnery officer around to call in a lurking destroyer's weapons. So I painted the incredibly lanky RAF chap and his somewhat over-prepared-for-trouble artillery opposite number. 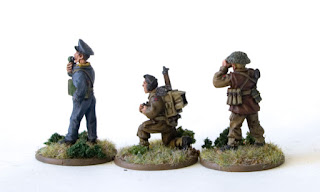 I wish that more of the Commandos wore those leather jerkins that the Artillery officer is wearing. They were popular in the marines and kept you warm-ish and dry-ish without wearing a bulky coat. The RAF officer was a fun change in tone and pace after so much brown. His yellow scarf being a particularly RAF accessory.

Finally we get on to the leadership options for the army. The chap above is actually the second officer I painted for this army, more on the first in a moment, but is actually the one I now prefer. He's a bit more down to earth and practical - although I love that he's wearing a tie. Otherwise, there's not a whole lot of difference in the painting from him and the men.

My first option for officer was an Artizan games mini of Lord Lovet with his piper (no, really, read up on this chap, he was mental). I was charmed by the idea of the eccentric look that he was sporting. Trouble was, that was only on D-day, and was mostly for morale boosting by being contemptuous of the danger from the Germans. On a raid that white submariner's jumper is madness and he didn't wear it. So... I decided to keep him as a fun painting project only (the tartan on Bill's pipes was fun) and special character. I'm much happier with his more dour replacement above. 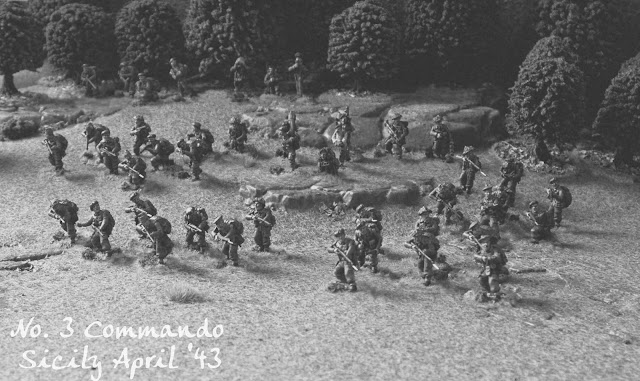 And that is all, my little Commando army is complete! Well, almost, I have a landing craft I am working on but more on that another time. When I took the group photo I was so happy with what I'd put together that I felt the urge to go one step further and play with some photoshop. Thus we have our "authentic" photograph of No. 3 Commando in action! Enjoy! I'd love to know what people think about the project and any musings on historical gaming in general, hit me up in the comments, would love to chat. Until next time lovely people