Bearers Of The Word

By Jeff May 18, 2020
Greetings all you lovely people. Today I start my newest and evilest project. Oh yes, we did a Genestealer Cult together, you and I, but they are innately evil. I want something that chooses evil, revels in it, corrupts others. With that in mind, there really is only one candidate: the forces of the XVII legion, formerly the Imperial Heralds, now the Word Bearers.

I have always had a massive soft spot for the Word Bearers. They are, after all, the legion that started the whole Heresy. They were the first to turn to Chaos, the first to start corrupting their brother legions, the first to plot, scheme and plan against the Emperor. Horus may have been the figurehead, but Lorgar, and maybe even more so his First Chaplain Erebus were the match that lit the fires of the Horus Heresy. Plus they use a ton of cultists and I do like cults. 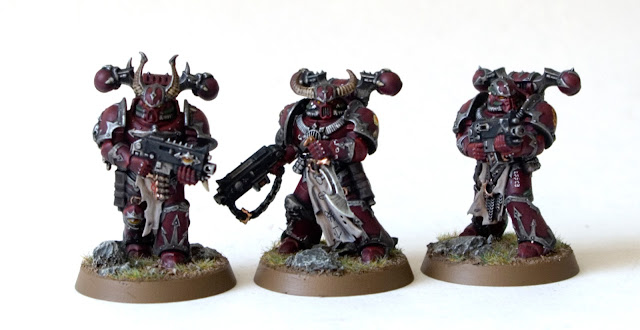 I'll talk about the painting in a moment, but first I feel I should introduce a mysterious narrative voice that will lead us through the backstory of this army. We'll meet him one day, but for now I shall turn you over to him to start chatting about the lore:

"Let me tell you of these great forces that I have set in motion. My design shall become clear in time, but for now you must see the pieces in play before the game board can be revealed. We start with the forces of the Graven Star, a Chapter of my beloved Primarch's legion. I have served the Graven Star for several decades but am not truly a part of them. My type struggles to truly belong. There are some among the Graven Star I know well, those who I stood alongside in the ashes of Monarchia, who watched Calth's star poison and dim with me. Those who remember fighting at the Urizen's side in both the Great Crusade and the Liberation that we attempted to follow it with.

"But most are new boys. They tell me 10,000 years have passed in realspace. I struggle to believe it, from my perspective a mere 630 years have passed since Horus failed us. Nonetheless, that makes me old, even for an immortal Astartes. These boys, barely a century old, raised in our new home on Sicarius. They fight well, hate the Imperium as they have been taught to. But they do not have the raw, seething, justified hatred born of witnessing our humiliation. They cannot know the thrill that was choosing the fate of a galaxy. I love them as an elder brother should. But even among hundreds of younger brothers I feel lonely at times."

So with our enigmatic introduction to the Graven Star chapter of the Word Bearers out of the way, lets chat painting! These models are all the unipose ones from the Start Collecting box or Shadowspear if you had that. Thus there was not a huge amount of thought needed to go into the assembly. I will be expanding this squad in the future as I want 15 strong units of marines. Two reasons for that: one, it feels different to the Imperial way of doing things, an older arrangement. Two, it'll feel like little warbands fighting together under a unifying Lord which I like. The new Chaos Space Marine models are a real leap forward compared to the old ones. They may not be perfect for all flavours of Chaos but lordy lord are they perfect for Word Bearers. 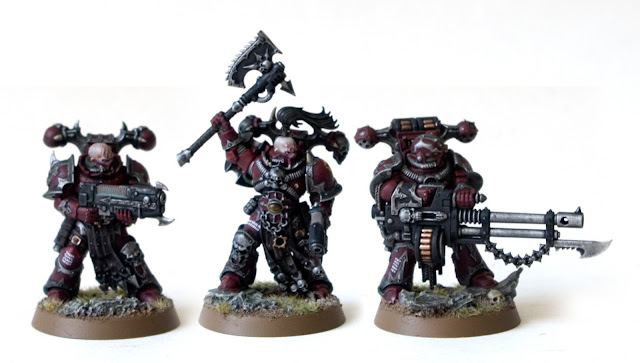 Of course, all the added crunchy detail means painting them can be a bit of a sod if you go about it the way you would an Imperial marine. If you paint the main colour first and then go for the trim you will be rocking and weeping fairly quickly. It is honestly better to get the trim colour - especially if metal - done first and then cut the armour colour in afterwards. So, here is my process for these Word Bearer chaps: 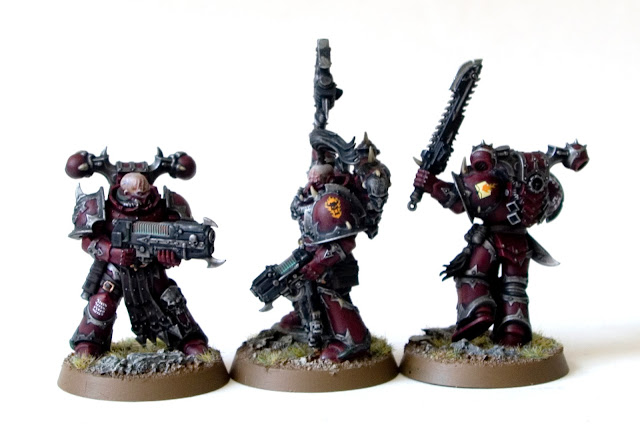 Speaking of decals, the new kits have a rather lovely sheet of insignia that make life a ton easier, including the burny demon head/flamey book device and Colchesian runes that you can slap all over them. It is fair to say that most people have the TransferFear. I do not, I have TransferJoy! Because I know of the true way. Gloss varnish, Microset and Microsol followed by a Matt/Satin varnish. You will thank me. It is the way. In fact, if we jump into the way-way-back-machine I did a tutorial about it on the old blog. Check it out here if you like.

What with lockdown busting my chops and keeping me indoors I have been painting a lot. So expect to see a lot more of the sons of Lorgar in the near future. Until then, lovely people, stay safe and healthy and