By Charlie January 25, 2021
Warhammer 40K's eighth edition ushered in a new era of streamlined core mechanics. It also gave us a baffling profusion of unit-specific special rules, stratagems, faction rules, sub-faction rules, and frequent updates. Ninth edition has added to that with the awesome Crusade mode, and while I welcome it, there’s now a lot to keep track of. In many ways I think this is the best 40k has ever been, but it also feels like the most complex, and the most overwhelming.
There are a few ways of handling this. One could just use a simpler ruleset such as Grimdark Future, or to use house rules to cut out elements of the game you’re not keen on. For this article, though, I’m going to proceed on the assumption that you want to play the official rules, but would like that experience to be less cluttered.

You don't have to keep up with everything

The easiest way to not be overwhelmed is to realise that unless you're a tournament player, you really don't have to be on top of everything. Sure, there's books coming out every month and FAQs are a frequent occurrence, but it remains true that to play a game, all you have to bring to the table is the rules and your codex. The only two FAQs you actually need to pay attention to are the ones for the main rules, and your codex. That's it. Everything else - even books like Psychic Awakening which add rules to your faction - are optional extras to delve into if desired. Some of those optional extras are pretty damn useful, but they're not needed for basic functionality.
Arguably, points adjustments are things you should be aware of, but that's something to do before the battle, and it's a pretty simple matter of adjusting the points values in whatever you use to make your army lists - and if you're using BattleScribe or whatever, that'll happen automatically.
It might seem odd for me to suggest you don't need to worry about all the updates happening for all the other factions, but here's why: as a player, your first priority is to ensure your opponent has fun. Being on top of your own army's rules is much more important in that regard than having a patchy understanding of other factions. Get comfortable with your codex first, and branch out from there if you want to.
For me there's an immersive fringe benefit to this approach: I enjoy being surprised by the things I didn't know my opponent can do, at least the first few times I encounter them. It's enjoyably cinematic when you find yourself thinking, "This is fine, this is fine... wait, they move how fast? FIRE EVERYTHING!"

What if my opponent is super knowledgeable about all the supplements and I'm just being a basic bitch with my codex? Won't they have an advantage?
They will, yes. But your opponent will generally know this going into the game, and should - if they’re a decent human - be happy to help you accrue more practical experience so that your confidence grows. That way, they benefit from a better opponent down the line. If they don’t want to help out newer players, then frankly, I’m not sure you want them in your social circle anyway. Besides, the tactical challenge is only one (admittedly important) element of what makes a game fun; for most of us, half the point is the cinematics and the social-ness.

Make yourself an army summary sheet

I have made my life significantly easier by putting all the rules for the units in my army on a single A4 summary sheet. This required some enthusiastic format wrangling in Word, since my army only just fits on a single page, but reducing Codex: Space Marines and Codex Supplement: Ultramarines down to a single sheet is much easier in-game.
The added fringe benefit of doing this is that it really forced me to go through each of the datacards for my units in-depth, and revealed to me several special rules that I'd straight up been forgetting, such as the Apothecary's 6+++ aura, and the Chaplain's Spiritual Leader aura. Look, I'm new to both units, and they're a lot more complex than they used to be, ok?
Now if you're going to do this, make sure you do it with a program that has some flexibility. Google Docs is particularly crap at complex layouts, so while it can be used, it will generally be less space-efficient and altogether clunkier to grapple with than Word. It will therefore also take you a lot longer. 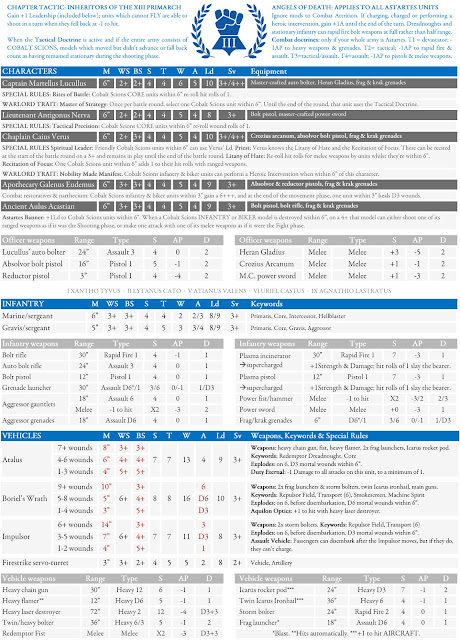 If you'd like to make one yourself and would like a head start, you can download a copy of my .DOCX file at the link below. I've switched out my original font for Calibri on the basis that it's a pretty ubiquitous font and should hopefully prevent Word crapping itself when you open it.
Cobalt Scions summary [compatibility version] V2.docx
Why not just use Battlescribe or Buttscribe?
Yes, Buttscribe is a real thing. Both Battlescribe and Buttscribe are amazing tools, but they don't display information nearly as efficiently as a custom sheet. The datacard format used in current 40K works fine for its intended purpose, but wastes a lot of space once you know which units and upgrades you're using. I wanted to eliminate scrolling on a touchscreen or leafing through multi-sheet printouts (particularly since I'll be using my phone for my Crusade Roster - see my final tip). I also wanted my summary sheet to be visually distinct so that when I make some for my other armies, it'll be easy to see which is which at a glance.
Wait, you said all the rules for your army, but I see no stratagems in your summary!
That's true, and in my first version I did include the somewhat bracing thirty-six stratagems I expected to be relevant to my army. This made it a two-page document instead, and you can download that earlier version here. Why did I axe them in the end? Read on.

Agree to a Stratagem Deck with your opponent

One thing that has significantly impacted 40K's complexity since the advent of 8th edition is stratagems. As a marines player, I have access to 57. That's 7 from the core rules, 34 from the marines codex, and 16 from the Ultramarines supplement. That's a lot of stuff to remember to trigger when they become contextually relevant. This inevitably results in some thumbing through books or flipping through a stack of cards saying "I swear I had something useful for this" while your opponent twiddles their thumbs.
I have enough conflicting thoughts on stratagems to write an essay on the subject, but that isn't what we're here for today. Ultimately, many factions and even specific units rely on them, so you can't just remove them wholesale without seriously affecting game balance. For the purposes of this article, that means we're stuck with them.
The question is how to mitigate the problem. One proposed solution is simple: before the battle, have each player create a stratagem deck consisting of the 7 core stratagems, and X more of their choosing, where X is the biggest number of stratagems either player feels comfortable with. X=10 feels like a good compromise between "why even bother" and "Indecision, First of His Name, King of the Andals."
I should add that thanks to the pandemic, this suggestion is at the "I need to test this in game" stage, but fellow Bunker writer Andy suggested this and I immediately want to try it. Since I will want to change my deck between games, I picked up the Space Marines and Ultramarines data cards. You could easily make a stratagem summary sheet or, you know, whatever works for you.
Let me know if you've tried this or if you have thoughts in the comments, since obviously I'd be interested to hear how that went.

Use a Digital Crusade Roster

If you're playing Crusade (and you probably aren't, because we're stuck in lockdown thanks to everyone's favourite pandemic) you will have learned there's a lot of bookkeeping. At the risk of honking my own fog horn, I made a mostly automated Google Sheet designed to make that process, and the pre-game process of making an army list, much quicker. You can read about that here, so I won't go on at length.
I've got plans to add one or two new features to it soon, so will of course update this blog when I've done so.

I imagine I'll end up making more summary sheets for my other armies as and when I go back to using them regularly. I mostly know the 8th edition Guard codex and its stratagems off by heart, but I'm sure that'll change a little when they get a 9th edition book.
If you've got other tips on making the game less extra then I'm keen to hear them; get ye to the comments section and share your wisdom if so.