By Andrew January 11, 2021
Right then, if you are here there's a fair bet that you are someone who prefers the narrative side of gaming.  As such, I have no idea whether this post will be of any interest to you whatsoever or whether you'll just find it trite and boring, tough.
I want to talk a little about background.
This post was going to be all about the characters in my Necron army but I have spent a whole day trying to write something for them, and many weeks with this post sat in draft thinking about it and I've come to a conclusion.
I hate writing characters.
If you want a world, a system, a biome, fauna, flora, geology, astronomy, physics, technology, a civilisation (preferably fallen), then I will write you that over and over again, I love it.
Most if not all of the background that I love, and my thoughts about armies, forces, chapters, and everything else revolves almost completely around the worlds, systems, and civilisations that birth them.  I think absolutely nothing about the characters.
As soon as I try and create a character my mind blanks.  Nothing.  Void.  Tumbleweeds.
I try so hard to write something, to create, but it's like getting blood from a stone.  Every last word is agonised over, erased and re-written over and over, and yet it still sounds trite and contrived, if not cliched, as soon as its written.  It just doesn't seem to work for me.
I can create a character of sorts if that character is a puppet.  What I mean is a character that is a victim of circumstances, whose motivations and drives are a product of some outside aspect, an event in their lives, another character, the circumstances of their upbringing or the world in which they exist (see, I'm already back to world building).  This is fine in its place, but isn't really what you look for in the leader of a force.
This is my problem, you see when your entire civilisation has become mindless automata, deranged and debased, or constructs intended to steward your hibernation for millennia of millennia, it falls to the rulers of the Necron force to define the driving motivations and to a great extent personality for the army.
I just can't seem to find that.
Also, names.
Just don't, please.
I also can't do names.
I wish I could live in a world where every character was called Bob, or Fred, or Shep.  I cannot count the hours I've spent trawling through online name generators, falling down wikipedia link chains, and just opening random pages of dictionaries to try and find names.
So, without further ado, I present to you: 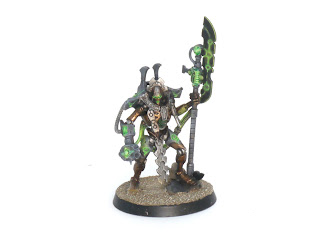 Lord Bob (I'll figure something out I guess eventually)
Here should be something about how he's both the architect of the Ikarran dynasty, but that's not exactly something to be proud of because it just so happens to involve the enslavement of an entire galaxy spanning race, sucking out their souls, and locking them into metal bodies.
I've also got some ideas that he may have been tinkering with the Necron bodies, and that had the unexpected consequence of breaking those Necron's psyche's which has ultimately led them to becoming various Destroyer variants.
Oh yeah, and he also collects as many C'Tan shards as they are ultimately responsible for all of this and so its the little revenge he can take upon them.
Could that be any more boilerplate Necron? 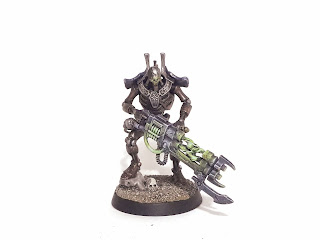 Warden Fred (also to be renamed)
I've got even less for this guy.  He's basically just an extension of the Lord's will.  I'm sure I could do something about him wanting to take over and just biding his time but I might have to be a little sick in my mouth.

Of course, now, with the model that in many ways is the least likely to lend itself to any backstory, it's a prisoner fraction of a god that is let out for some yard time if it's well behaved, there's some creative juices flowing.  It's still pretty beige as far as story goes, but this I actually feel invested in. 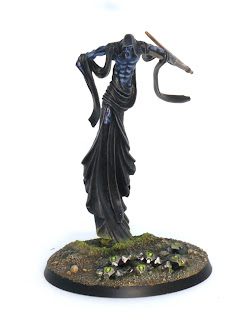 The Bringer of Night, Reaper of Worlds, and Death of Hope (Shep, the C'Tan)

The Nightbringer's existence is something for which you may consider purgatory an escape.  It is physically and mentally shackled, an existence that is because of, and at the whim of its captors.  Even now it is a being of immense power, capable of perception, thought, and deed beyond the imagination of most, yet knowing it may only act when unleashed by the Necron Lords it is truly shattered.
If the Nightbringer could, it would surely escape its confines.  However its very being prevents it, it cannot see past its need to reap revenge upon its captors and so is incapable of working to free itself.  Instead it finds scant reward in the destruction it visits upon the enemies of its Lord whenever it is unleashed.

This is one of my favourite ever models produced by Games Workshop, in an age of metal casting the motion achieved in the sculpt is incredible.  I have recently rebased the model as it originally came with a tiny 40mm base and would fall over as soon as you looked at it.  It's now on a 60mm base which should match the void dragon, and is much more in keeping.  In doing so I took the opportunity to embellish the base with a swarm of scarabs being driven before the shard, and built up a wave of sand as the very earth recoils from the presence of such a being. 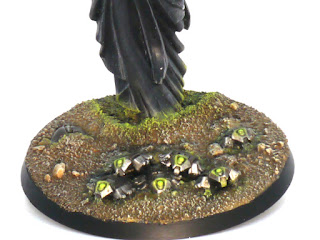 So yeah, not really a background article as such, more me ranting about how I can't write character background.
I really wish I could write characters, but I struggle.  If anyone has ideas of ways I can work with this, or something that might help I'd be very happy to hear about it.  Or perhaps there's something you struggle with creating when it comes to background.
Drop a line in the comments if you do.
Also, if anyone wants a world or civilisation creating, give me a shout.  I seriously do love that shit and have degrees in a few of the relevant fields so can be quite confident it'll hold up to a reasonably level of scientific peer review (way more so than anything GW have ever written I can guarantee).
Toodle pip-ski
Andy