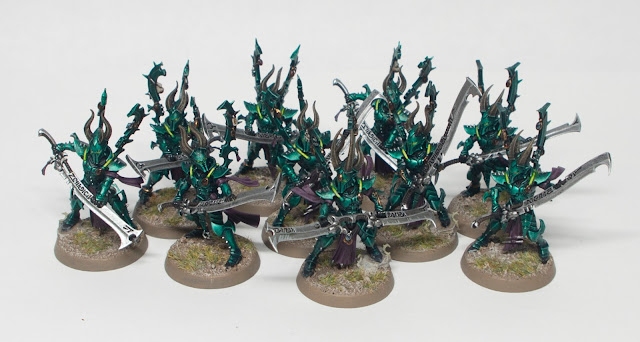 It is fair to say that all Drukhari are masters of nastily applied mayhem and violence. But even amongst that excessively stabby breed there are some who could be considered "professionals" at it. These are the Incubi, elite, mercenary bodyguards and warriors with a dedication and focus that makes them the equal of any temple of Aspect Warriors amongst their Craftworld kin. 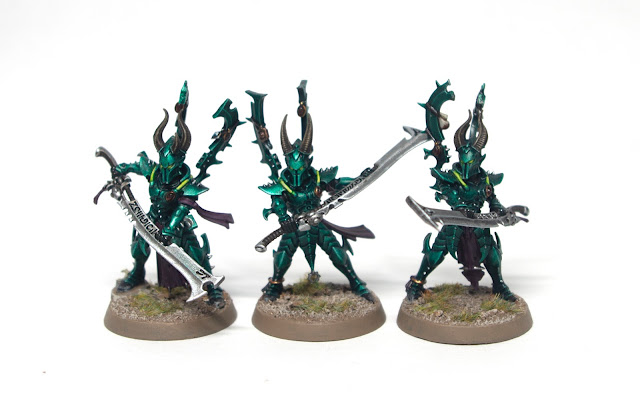 And dayumn do they look good doing it. I love the whole Drukhari range but the Incubi were just knocked out of the park. Covered in trophies and the shattered spirit stones of defeated Aspect Warriors they just ooze professional nastiness. As they are "Blades For Hire" I toyed with the idea of having them in another colour, but I just loved the green too much. Also I wanted them to be emphatically part of the Kabbalite force so green a go-go. Weirdly the part I agonised over most on these was the horns. Darker? Lighter? Same as the armour? They caused me all kinds of trials and tribulations. In the end I settled on a dark brown highlighted with grey as a pleasing compromise.

I've also, finally, figured out a voice for the backstory for this army. A spy in it's midst reporting back to Asdrubael Vect. One of my minis in this force will have a tiny sigil of the Kabal of the Black Heart somewhere on it. That'll be the sneaky spy Chrenmoer, lets have a peek at his first report back:

"My Lord Vect, mightiest of all Drukhari, accept this humble missive as declaration that I have met with success and have infiltrated the growing raiding force of the exile Kyraqir. It is as reported, my Lord, Kyraqir has indeed been cast out from the Kabal of the Flayed Skull for transgressions I have not yet been able to ascertain. He seems to have taken with him those of his household staff that did not immediately abandon him and is building a force around them. It is fair to say that Kyraqir has no reserves of currency or political favours and thus is building this force exclusively on promises of future greatness. As you might imagine, Great One, this is cutting very little ice. He seemed to be stalling in his efforts, a measly band of the Cult of Strife joining him for promised revels, until this moment.  Somehow, he has persuaded the Shrine of Malignant Grief to join his cause. As you know, the Incubi are notoriously close lipped but I believe that the promise was one of an abundance of our prancing daylight kin to test their Klaives upon.

"I dare say that should his various promises come to naught there will be a race on to see which faction revenges itself on Kyraqir first. He has yet to secure the confidence of a Haemonculi faction but the actions of the Shrine of Malignant Grief lends his venture a veneer of respectability and assurance that I feel will aid him in his future negotiations. I leave it to your immense intellect to determine what to do with Kyraqir. Spare him and hope he succeeds and thus destabilises Flayed Skull politics? Sabotage his efforts, ridding our city of a braggart and failure and those foolish enough to follow him? Or simply slay him and nip this variable in the bud. I remain your most obedient servant, my eyes or blade are yours to command Great Lord and I eagerly await your decision. Yours until time ends, Chrenmoer."

Urgh, sycophantic wee git isn't he? But now you have some sense of the character and purpose of the army. An Archon on his last legs, probably not even banked clones available to repair him should he fail, risking it all on one last roll of the dice. His eyes fixed on Eridani and whatever was making that strange vibration through the webway.* 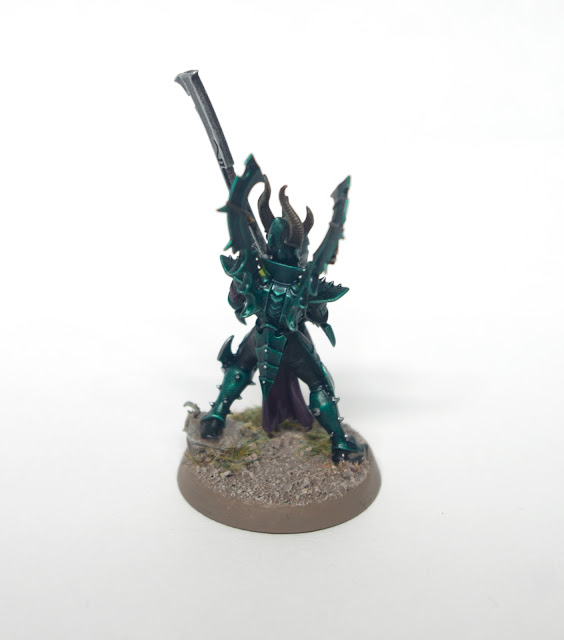 Well, gentle reader, that is pretty much it for this edition of Jeff Paints Evil Stabby Pixies. Hope you are enjoying how the army is coming together, I sure am, and stay tuned for the next unit which will almost certainly be a flock of Scourges. Until next time, lovely people,

*Charlie: That would be my Goff rokkers using one of IOL-9's webway gates as a gong during their concerts. See last week's post for context.