First steps into the realm of Chaos...

By Em February 29, 2012
Just over a month ago on a memorable Friday evening, I collapsed into the sofa with a beer in my hand and an unopened box of Chaos Warriors on my lap. The front picture promised a unit of dark and demonic soldiers, their armour gleaming in the volcanic light as they marched towards a glorious victory in the name of the Chaos gods. Cool! So I ripped open the box, tipped it up and what should fall out but.... three racks of approximately THOUSANDS of teeny tiny grey things. Can this be right? What am I supposed to do with all these bits!?!? The answer: cut out each tiny piece (being very careful not to accidentally snip off important parts of your manly warrior’s anatomy). Then you need to clean up each tiny piece with a sharp knife (which invariably finds its way into my clutzy fingers). THEN you can start gluing your minions together. All of this has to be done before you can even think about picking up a paint brush. Good job I have a whole year to get this army done then! Ok, ok, end of moan. To be honest the assembly part is more than made up for by the fun of painting.

So, fast forward a few hours and several more beers and hey presto, I have brought forth into the world 12 hunky 'brick-shit-house' warriors adorned with the skulls of their unlucky victims and wielding weapons large enough to fell mammoths. Their newly sprayed chaos black faces glower at me from the shelf, warning me not to mess up their paint job... or else...

Judging by the sculpted chips in armour and tears in the cloaks, these guys were not preening peacocks. A base coat of brown followed by dry brushing of chainmail had them looking suitably rusty and dishevelled. I’ve also added some mud to the end of the cloaks and the boots. Now they look more like they’ve marched from the Chaos wastes, an area not overrun with bath houses. I wanted some variety so decided to mix up the animal furs – everything from grey wolf, through to Musk Ox (erm, brown), and polar bear.

My grand plan is to have two units of these rather well built warrior types. 18 x 'just dipping my toes in, not too sure I want to sign up for the freaky mutations yet' Tzeentch guys and 18 x hard core Tzeentch fanatics with double heads, mouths growing out of their arms, crab claws, giant phalluses for ears and so on. Then come the very important units. The pony units! Two units of 5 Marauder Horsemen, 9 Chaos Knights with a mounted Sorcerer Lord in their midst (mainly to make them line up nicely so Maisey doesn't start twitching every time he sees my army) and an Exalted Hero (you guessed it) mounted on a Chaos steed. Add to that 10 Chaos Warhounds and a rather large, pot-bellied bandito and that's all I have to paint. 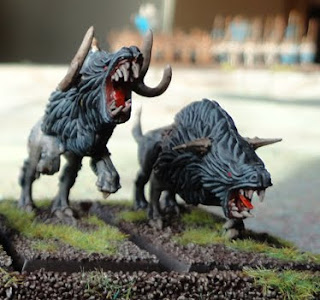 My first warrior unit is still not quite done so here's a pic of my first completed unit of cuddly canines. Who also happen to be my first ever complete unit of Warhammer models! Woooh!

Yours in the name of the Dark (blue) Lord