The head bone is connected to the neck bone

By Maisey February 07, 2012
So, in my last post I mentioned I was going to wait for the new army book for the Vampire Counts to come out before making any firm choices about my army, well I waited for the new book and picked it up on release day and scurried home like an over excited ghoul bringing his master some kind of tasty damsel. I also picked up a single box of skeletons at the same time, mostly because I knew that on reading the book I would want to start working on things straight away. On arriving home I made myself some tea (which is my hobby fuel) and curled up with the book.

A few hours and 3 pints of tea later I had absorbed enough of the army book to start working on my list. As everyone on the BBB (Beard Bunker Blog) knows, I’m a very gentle gamer in terms of army selection. I’m not building this army to win anything, I’m building it to enjoy myself. So I started off by working out what I want in the army. To me an undead army wouldn’t be worth it’s bones without seemingly endless ranks of skeletons. I love those boney buggers. One of the main things that draws me to an army is the core troops and the VC’s Skeletons are some of the best. So I crammed as many skeletons and grave guard in as I could. I would also have had my application to the vampire country club rejected if I didn’t include a huge shambling pile of zombies in the list somewhere. Zombies are, in the new book, a very viable option now. Not only are they a point cheaper than before (3pts ftw) they are also toughness 3 now. So they will be re-deaded at a slightly slower rate when I throw them at people. The new black knight models are all kinds of shiny so I just had to include them. There is also a fair assortment of characters in the list. Firstly, Philippe and Etienne have been included and given the appropriate equipment to match their personalities. I’ve also included a Wight King as a Battle Standard Barer, mostly because it's a beautiful Forge World model and I couldn't resist it. To round up the characters I’ve included an as yet un-named necromancer, again mostly because I wanted to use the plastic GW kit and partly I wanted some serious magical heft. Below is a screen shot of the 2k list. It’s completely built around the models I wanted to paint and in the numbers I feel they should be there in. There is a 3 k list but that is a story for another time. 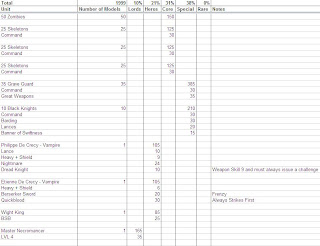 So, the next big decision had to be made. What are the army's colours going to be? Well I had already decided that whatever colour I went with as the primary, it wasn’t going to be red. Yes, a Count's army with no red on it. Sounds like madness but I wanted to make them a bit different. I wanted the army to feel cold and eerie and red just doesn’t feel like that. After a few experiments, including a deep green and a very pale blue (think baby blue but paler) I settled on a rather vibrant turquoise. The turquoise is complimented by the orangey/rusty armour and the bone. To me the scheme is fairly striking and, so far, not too much of a chore to paint. Also because of the Bretonnian background to the two vampires I've decided to include the fleur de lys iconography throughout the army. Mostly on banners but characters and some shields will probably have it added as well. Here is the first finished unit for your enjoyment. I’ve started work on the big unit of zombies and grave guard, as soon as they are done I’ll share them with you all. 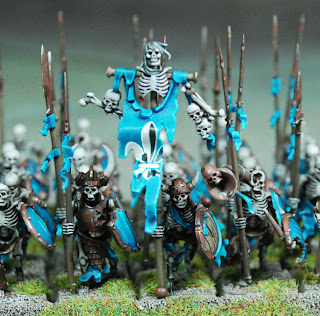