By Charlie April 24, 2012
It turns out that having an overly active social life can have an impact on one’s painting output. Whilst this is a good problem to have, it does mean I still haven’t finished painting the Blades of Taal, and thus I've no pretty pictures to show y’all.

What I have done, however, is play a few games using the new Empire book. To that end, and because I’m an opinionated muthahubbard, I thought I’d share my thoughts on it. Doing so may or may not constitute a review. 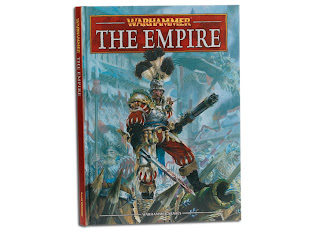 As a precursor, I must confess that I was a little sceptical when I first heard rumours of a new edition of the facial hair delivery system that is Warhammer Armies: The Empire. What was wrong with the current edition, I wondered? The maxim ‘if it ain’t broke...’ seemed to apply, and my fear was that they were going to lead my favourite army into a dark back-alley and leave bits of it bleeding into a bucket. Thus, the question on my (and, I suspect, every other Empire player’s) lips was this: is the new edition actually an improvement?

As established in previous posts, the biggest factor in how much I like a rule is how cinematically it brings the Warhammer World to life. The soldiery of the Empire always felt like the heroic underdogs in most of the fights they ever walked into, meeting slavering monsters head-on with little more than pantaloons and optimism. Whilst droves of them would get knocked aside, crushed, stabbed or pulped, they’d fight on, and against all the odds, the Empire would survive (even if most of my state troops didn’t). 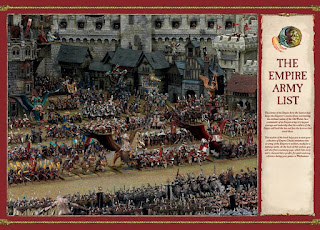 The new book has done several things to emphasise this. First off, the characters. Officers (i.e. captains and generals) are now da bomb at holding a line together (thanks to the hold the line special rule), whereas warrior priests are now much more offensive than defensive; they no longer have defensive abilities like the Unbreakable bound spell, which even as an Empire player I can admit is good for game balance. Oh, and Engineers are now totally worth their points. In fact, all the characters feel like they have a role to play, which hopefully means an end to the proliferation of warrior priests present in so many armies – people will genuinely want a variety instead, although as usual it’s possible to give things a narrower theme if you prefer.

Secondly, the state troops. They’ve been significantly improved, with detachments working exactly like an extension of their parent regiments, in that they share their regiment’s psychology rules. This makes detachments significantly harder, and means that they work just as one would imagine. Additionally, the points values for the state troops have all been adjusted (generally in the ‘up’ direction, given the new detachment rules). To my mind, the halberdier remains the bread-and-butter choice. That said, spearmen are now the cheapest option, which makes a previously redundant unit viable again. Maybe I’ll even collect a unit of them at some point. I mention this because one of the strengths of the book, I think, is the way it encourages variety a little more than the last one did, and the last one already sported more variety and flexibility than any other two army books combined.

One bone of contention with many players is the epic nerfing of the mortar. Personally, I’m all for it. Blast markers are horrendously powerful in the current version of Warhammer, and dropping the mortar’s strength down to 2 whilst upping its points to 100 has changed it from being drastically overpowered to being reasonable. I just used it in a match against some Undead, and getting a direct hit on a regiment of skeletons still made an impressive mess without being preposterous. 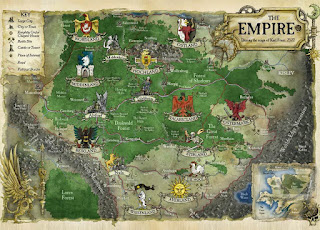 All in all, whilst I’m surprised the book came out instead of an update to the much-sidelined Brettonians and Wood Elves, it’s a significant improvement on its predecessor. Oh, and as you can tell from the various pictures in here (taken from www.games-workshop.com for illustrative purposes only) it’s also very pretty, which it bloody well needs to be, given the price hike. If I were to have one criticism, it’s that if I’m going to pay £25 for an army book, I’d rather have more content (i.e. richer background material) than a hardback cover and full colour on the inside. But it is very pretty. Hmm. What do you think? Feel free to thrust your opinion into the public domain via the comments box below.