By Charlie September 18, 2013
There came a point - somewhere aroundabout the fourth Empire Battle Wizard - that I realised I was committed to producing one wizard for each of the eight lores of magic. To that end, the fourth wizard to get a spot in the cabinet is Ruprecht Grunwald of the Jade College: 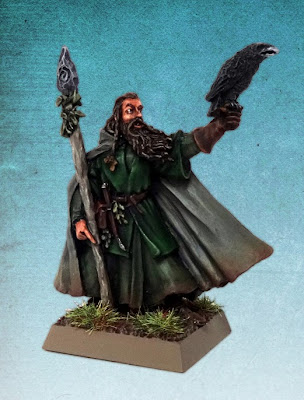 He’s hairy, he knows no bathing habits, and he uses dried plants to fix most problems, but if you called him a tree-hugging hippy he’d... he’d... ok he’d just shrug his acquiescence and offer you a puff on the Happy Pipe.* 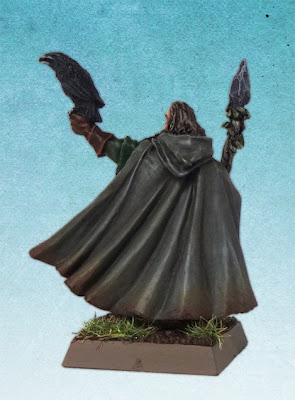 The prospect of being able to use any of the eight lores in a game is enticing, but to be honest, the main draw is getting to paint eight very different characters. One generic entry in the heroes section of an army list can spawn so much variety. 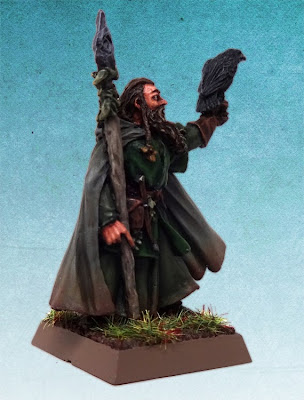 This old Radagast model is quite chunky compared to the other models in GW’s Lord of the Rings range, so it fits perfectly among Warhammer models. He’d probably work just as well as an Amber wizard, but I have other plans for that lore, and this dude looks like the hippy druid to end all hippy druids.

This raised the question as to why he’s got a pet crow, because a man can’t just have a pet crow. Even if he’s a wizard.

Eventually, I figured that a magic bird savvy in leaf recognition would be a genius familiar for a herbalist. Got a medical emergency? Need to find some horsetail? Put the crow on it. He’s all over it like David Cameron on U-turns.

Were I a sensible gamer, I’d make sure anyone using the Lore of Life was a high-level caster. Throne of Vines is a really cool spell that has no effect in itself, but buffs the other spells in the lore – pretty awesome, unless your level one hippy rolls it for their one spell. Regular readers, however, will know I'm a sucker for character at the occasional expense of effectiveness, and as such, Ruprecht is a relatively young wizard, and is only level one at the moment. He’s more there for story and variety than serious battle-ready casting.

I’ve already got plans for the remaining four wizards. Wait, scratch that, I’ve already got models for three of them, one of which is already prepped for painting. Hello, lore of shadow...

*He's not actually a stoner. Or rather, he's not just a stoner. He's got beliefs and stuff. More on that as and when he gets introduced into the campaign.