By Charlie December 10, 2013
Good morrow all! The last update on our little war in Hochland was in July, and rather unsurprisingly, an assload of stuff has occurred in the interim. To keep things fresh (so fresh) this post will present some of said happenings via the medium of bullet points, prose, and a fake newspaper.

First, the bullet points. Like the written equivalent of those clips they play at the start of any given HBO series. Previously, in Hochland...

- The Hochland state army laid siege to the de Crécy’s stronghold at Hovelhof and has kept them contained there for the last four months, despite several breakout attempts. Said breakout attempts were quite meaty. See below:

- The Bittermoon Goblins still control a big chunk of the Drakwald and the Old Forest Road.
- The Skaven still lurk in Hergig, apparently lurking for the sake of lurking.
- Splendiferus the Magnificent has been hiding in the woods for months now.
- The Stormbournes have started serious renovation work on Karak Hoch.
- During one of the de Crécy’s early attempts to break out of Hovelhof, Amelia von Lessing and Phillippe de Crécy engaged each other in a magical duel. Phillippe was better prepared this time and, keen to get his revenge for suffering the Fate of Bjuna, put Amelia in a death-like coma.

What with Amelia being – so far – one of Hochland’s most effective defences against the vampires, her loss was not one the Empire was prepared to suffer. Naturally, the only option was a HEROIC QUEST OF HEROICNESS. Cue Cedric, Dwalin, Captain Rainer, Captain Thiele, Stromni's Wanderers and seventy dead beastmen outside the walls of Koerin. Good times.

And now, here’s a bit of stuff that says... stuff. About what done happened. To Amelia.

Amelia von Lessing awoke to the sight of a weird-smelling druid wreathed in pipe smoke. As she stared blearily up at him, her last memory rolled back into her mind: a pale-faced knight swathed in a tattered black cloak galloping towards her, bellowing a curse in Ancient Khemrian.

She was in an unfamiliar bedroom. Beneath the cloying musk of meadowsweet there was a suggestion of embalming fluid.

With an awkward smile, the druid stood aside. Behind him, filling the lower half of the doorway, was Dwalin. Amelia tried to speak, but her dry tongue caught against the back of her mouth.

“Three months,” Dwalin said in answer to her unspoken question. Her eyes widened in panic. If she’d been gone for three months, anything could have... “Don’t worry, the bastard’s not been able to get out of Hovelhof,” Dwalin added, tamping his pipe. She slumped back onto the pillow with relief. Slowly, as she emerged from the long sleep, her body started to send signals to her mind. Her limbs were cold, and tingling. She felt empty. At first she took it for hunger, but she soon realised it was more than that. Something was missing.

For the first time in her life, she couldn’t sense the winds of magic.
She needed to get back to the Amethyst College as quickly as possible. Seeing Dwalin’s bitter disappointment, she promised that when – and if – her abilities returned, she would travel to Karak Hoch and do whatever was needed to repay her debt to the Stormbournes. First, though, she needed to buy passage down the River Drakwasser, and then the Talabec, all the way to Altdorf.

Captain Rainer, who (like Dwalin) had been involved in finding the druid, offered to escort her to the docks. She’d been wary of his motives when she first met him, but it felt unfair to remain suspicious of someone after they’d risked their life for hers.

Having dressed, and eaten her first meal in three months, she left the boarding house with Rainer and his band of halberdiers. Outside, it was painfully bright. Now, the guilt was starting to sink in; people had lost their lives just to wake her up. She leaned heavily on her staff as she shuffled down the road, struggling to pay attention to Rainer’s faltering small talk.

They entered a narrow street. “A shortcut,” Rainer explained. She didn’t recognise it, but then, she barely knew the town. Indeed, a town that named itself ‘Bergsburg’ hardly seemed to know itself.

Halfway down the road, Rainer gave a hand signal, at which the halberdiers rushed up alongside and around the two of them, their grips nervously tightening around their weapons. Her shoulders slumped, and she gazed south in the direction of Altdorf. Yep, that was stupid of me.

“Amelia von Lessing,” Captain Rainer said, “By the authority of Count Theoderic Gausser of Nordland, I am arresting you for the murder of your father, General von Lessing.”

Short version of the above: YAY.

On a more humorous note, I made an Imperial newspaper to cover a lot of what’s happened subsequently: 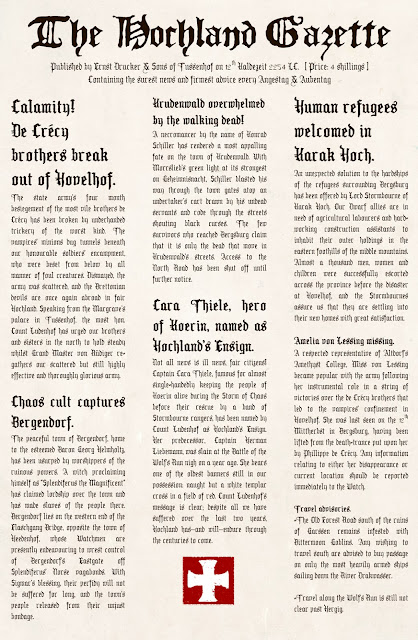 The above image is big enough to read when expanded (clicky click click), but if you don’t fancy reading Germanic fonts, the text is provided below:

Calamity! De Crécy brothers break out of Hovelhof.
The state army’s four month besiegement of the most vile brothers de Crécy has been broken by underhanded trickery of the worst kind. The vampires’ minions dug tunnels beneath our honourable soldiers’ encampment, who were beset from below by all manner of foul creatures. Dismayed, the army was scattered, and the Brettonian devils are once again abroad in fair Hochland. Speaking from the Margrave’s palace in Tussenhof, the most hon. Count Ludenhof has urged our brothers and sisters in the north to hold steady whilst Grand Master von Rüdiger re-gathers our scattered but still highly effective and thoroughly glorious army.

Chaos cult captures Bergendorf.
The peaceful town of Bergendorf, home to the esteemed Baron Georg Helmholtz, has been usurped by worshippers of the ruinous powers. A witch proclaiming himself as “Splendiferus the Magnificent” has claimed lordship over the town and has made slaves of the people there. Bergendorf lies on the western end of the Flaschgang Bridge, opposite the town of Heedenhof, whose Watchmen are presently endeavouring to wrest control of Bergendorf’s Eastgate off Splendiferus’ Norse vagabonds. With Sigmar’s blessing, their perfidy will not be suffered for long, and the town’s people released from their unjust bondage.

Krudenwald overwhelmed by the walking dead!
A necromancer by the name of Konrad Schiller has rendered a most appalling fate on the town of Krudenwald. With Morrslieb’s green light at its strongest on Geheimnisnacht, Schiller blasted his way through the town gates atop an undertaker’s cart drawn by his undead servants and rode through the streets shouting black curses. The few survivors who reached Bergsburg claim that it is only the dead that move in Krudenwald’s streets. Access to the North Road has been shut off until further notice.

Cara Thiele, hero of Koerin, named as Hochland’s Ensign.
Not all news is ill news, fair citizens! Captain Cara Thiele, famous for almost single-handedly keeping the people of Koerin alive during the Storm of Chaos before their rescue by a band of Stormbourne rangers, has been named by Count Ludenhof as Hochland’s Ensign. Her predecessor, Captain Herman Liebemann, was slain at the Battle of the Wolf’s Run nigh on a year ago. She bears one of the oldest banners still in our possession: naught but a white templar cross in a field of red. Count Ludenhof’s message is clear; despite all we have suffered over the last two years, Hochland has—and will—endure through the centuries to come.

Human refugees welcomed in Karak Hoch.
An unexpected solution to the hardships of the refugees surrounding Bergsburg has been offered by Lord Stormbourne of Karak Hoch. Our Dwarf allies are in need of agricultural labourers and hard-working construction assistants to inhabit their outer holdings in the eastern foothills of the middle mountains. Almost a thousand men, women and children were successfully escorted across the province before the disaster at Hovelhof, and the Stormbournes assure us that they are settling into their new homes with great satisfaction.

Amelia von Lessing missing.
A respected representative of Altdorf’s Amethyst College, Miss von Lessing became popular with the army following her instrumental role in a string of victories over the de Crécy brothers that led to the vampires’ confinement in Hovelhof. She was last seen on the 12th Mittherbst in Bergsburg, having been lifted from the death-trance put upon her by Phillippe de Crécy. Any information relating to either her disappearance or current location should be reported immediately to the Watch.

Travel advisories.
-The Old Forest Road south of the ruins of Garssen remains infested with Bittermoon Goblins. Any wishing to travel south are advised to buy passage on only the most heavily armed ships sailing down the River Drakwasser.

-Travel along the Wolf’s Run is still not clear past Hergig.

That’s all for now. Another edition of the Gazette may follow shortly, probably with more whimsy. If you have suggestions of things you think would be funny/amusing in a newspaper of Ye Olde Worlde, leave them in the comments!