A letter from the front

By Charlie June 06, 2014
It’s been a long, long time since the last update on our Hochland campaign.

One of the reasons it’s been so long is that so much stuff has happened that it was hard to think of a format in which to deliver said events. Or at least, a format that wasn’t just a series of bullet points slightly drier than an octogenarian’s happy parts.

Finally it came to me: what better way than to write a letter from the perspective of the Empire’s new commander writing his first report back to Tussenhof?

But first, here’s an update of the campaign map: 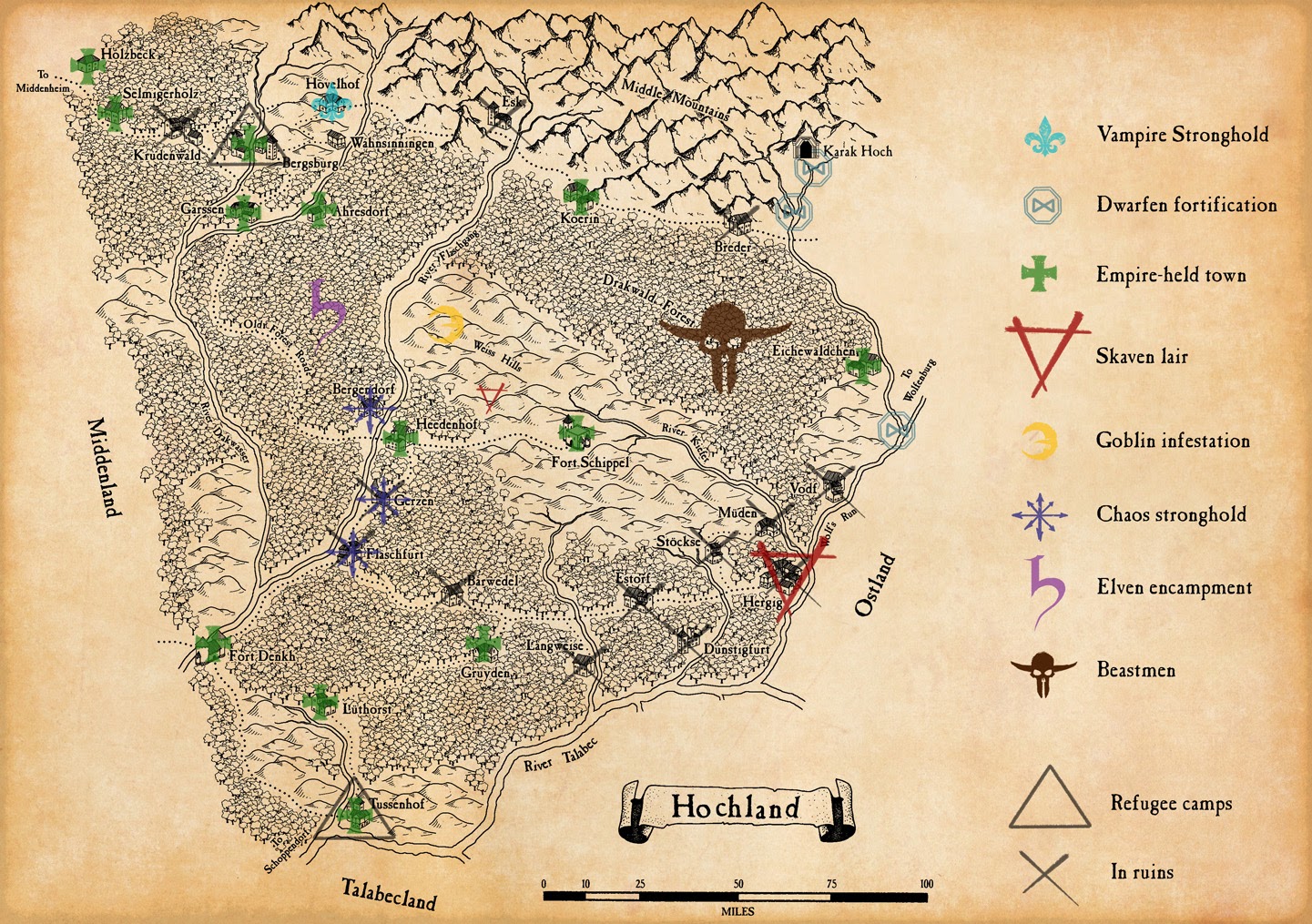 I’ll sprinkle a few portraits of the characters mentioned in the letter as a reminder of who’s who.

Now I see why you delegated so much responsibility to Von Rüdiger. Our armies are engaged on so many fronts that it would be impossible to conduct the business of ruling the province at the same time. Admittedly, Von Rüdiger had one advantage over me: I very much doubt that vampires need to sleep. Speaking of which, have you heard anything of him since his disappearance?

At the least, he has not returned to the chapter house in Bergsburg; the rest of the Inner Circle were kept there under house arrest for the better part of two months, scrutinised by priests of Shallya and Morr. They have now been released; my need of them was greater than my suspicion of them. I’ll explain that momentarily.

Speaking of people I don’t trust, Amelia von Lessing has returned to Hochland. Some of my captains are treating this as excellent news, but I am less than enthralled. Did you know, my lord, that she disappeared from Bergsburg because she was arrested? For arranging the murder of her father? I knew the man: one of Nordland’s finest generals. I don’t know the details of the case, but there can be no excuse for murder. That the judge let her off so lightly seems suspicious as well. I am of the understanding that amethyst wizards project their thoughts into the minds of others, and find it strange that she was not only spared the gallows, but allowed to pay off most of her jail time by selling her family’s estate to Nordland’s coffers. She might have helped us in the past, but I’ll be watching her movements closely all the same.

I said I’d explain why I needed the Silver Drakes. That need came from a new foe: a dwarf clan. Not the Stormbournes, who remain locked away in their mountain hold ignoring the slaughter around them, but some new clan, dabbling in sorcery and other, darker forces. They sent a great beast of fire and molten metal to break the walls of Fort Schippel. Von Lessing described it as a ‘K’Daai,’ whatever that is. It seemed impervious to conventional attacks, and it was only by the grace of Brother Marten’s blessings and von Lessing’s hexes that we slew the beast, and at great cost.

Seeing their creation banished, the dwarves were dismayed, and withdrew. We were in no condition to give pursuit, so great were our losses. The dwarves made captives of those who fled or fell in battle; what they want with them I do not know. If our other foes relent, we may effect a rescue.

Further east, the beastmen of the Drakwald Forest have grown in numbers, and are now venturing forth from the forest to attack us in the open for the first time in years.

Obviously, this makes further improvements to Fort Schippel critical. On that front I must relay yet more ill news. The brace of cannon you sent up with me – fresh from the new foundry in Tussenhof – were of inferior quality to those pressed in Nuln. I know this because we were ambushed by the Bittermoon goblins whilst transporting them to Schippel. Both barrels ruptured and exploded on their second shots. Humbly, I ask you for replacements of superior craftsmanship.

It is also of note that the goblins were, when we came upon each other, transporting freshly-felled lumber with the aid of a giant. What they are constructing, I am not sure, but with the beastmen and dwarves, we can no longer picket Rhagat’s lair in the Weiss Hills.

Worse, a new tribe of rat-men have been sighted in a number of places, but how they are moving such great distances unseen is a mystery to all. We may seek counsel with the Stormbournes, who seem to know more about these creatures.

The south, as you probably know, is still beset by a number of small Norse tribes, apparently united under the leadership of a man named ‘Volgin’. His finest warriors are protected from our handgunners’ reach by some foul magic, and engaging with them at arm’s reach would cost us too many men. If we are to drive them out, I must devise some new strategy.

In such dire times, one would hope the Elves would continue their efforts, and yet, nothing has been seen of them for several weeks. They seem to have disappeared into the western Drakwald.

But fear not, my lord. I will not falter in my duty. I will listen to my officers, I will safeguard the towns we have left, and I will take the fight to our enemies. We’ll not hide behind these crumbling walls anymore.