By Charlie April 23, 2015
It seems strange to start putting this story out now, given how long ago Mark and I began (and resolved) this little plot arc, but it is the first in a series of story-based posts that will, hopefully, catch the blog back up to where we're at in the Bunker's Hochland campaign.

Demonstrating a frankly fundamentalist approach to reader feedback, this post only exists because one anonymous reader asked what happened to Amelia, and what happened at the Siege of Fort Schippel. Well, that's a lot of ground to cover and it can't be done in one entry. Instead? A series of posts. The first arc of posts (maybe three?) will cover Amelia's abduction. After that, the siege.

I'll try and keep each post reasonably short, no more than two or three pages. They will of course be image-lite, but hey, we're a niche blog and this post has been written for a small niche within that niche.

So, Mr Anonymous, and anyone else who fancies a snippet of Olde Worlde fiction, click through the section break to read part one...

Amelia von Lessing suspected she was starting to like Sergeant Durnstoffer. The three cups of mead he bought her that evening had something to do with it, but mainly, it was the way he treated her just like he treated everyone else. He joked about her height like he joked about his own missing eye, or Hauptman’s short little legs... he joked about everyone. People were generally so awkward around her that she’d come to see socialising as something one did only out of duty. She felt she ought to say something to express her gratitude.

“I mean to thank you, Sergeant,” she said. He looked at her, baffled. “My sort aren’t always made to feel this welcome. It hasn’t gone unnoticed.”

“Think nothing of it,” he said, swaying on his feet, tankard in hand. “We all fight... you, and me, and her. And him. ’Specially him,” Durnstoffer emphasised, pointed at young private Bruger. The soldiers filling the coaching inn all cheered; young Bruger had earned his first scar during the day’s patrol. The young man smiled sheepishly and winced. “So I don’t care what they say bout wizzurds,” Durnstoffer continued, “long as you don’t ’splode up next to me I don’t care how you kill the bad’uns.”

One of the other soldiers, red in the nose, hollered, “The way he’s buying them drinks, I en’t sure if he don’t mean to splode up next to you, ma’am!”

There was a roar of laughter, and Durnstoffer shouted something semi-intelligible about insubordination, but he seemed neither embarrassed nor genuinely angry.

Amelia, however, blushed furiously. She didn’t feel angry—in fact she was curiously flattered—but anger was the easiest thing to do in any given social situation, so that’s what her face did, and suddenly everyone had shut up. Momentarily there was no sound but the crackle of the fire and the squeaking of the barman’s cloth on a dirty tankard.

There was no point trying to rescue the situation, she decided. It would only prolong the awkwardness, and if she left, then at least the Tussenhof 33rd could go back to enjoying themselves.

“I’m for bed,” she said. One of the soldiers gave a throaty cheer, and got slapped by a scared-looking corporal. “Oh, calm down, I’ll not kill anyone for rudeness.” She tried to smile at Durnstoffer, to show him that she wasn’t angry with him for being so forward, but she suspected she did a poor job of it what with the place staying so quiet, so she mumbled her thanks and left.

She woke to the sound of a dog barking. Putting a pillow over her head to soften the sound didn’t help much. Judging by the creaking floorboards and muffled voices coming from the rooms either side, she wasn’t the only one having her sleep disturbed.

Then the barking stopped with a yelp.

Grumbling, Amelia shifted out of the bed and crossed over to the window, opening the heavy wooden shutters. Moonlight shone off the puddles in the road and the mossy roof shingles on the houses opposite. To the right, uphill, she could see a few of the soldiers atop the village’s dilapidated watchtower. Their postures looked alert. It was probably a false alarm—it usually was—but she started pulling her clothes on all the same.

The first handgun shot was fired as she was buckling her belt. She muttered a curse and looked out of the window. Hunched figures scurrying across the road. Rusted armour, patchy fur, twitching snouts. Rat-men. So far as she knew, they’d never been seen this far north of Hergig.

They were coming for the inn, with no apparent interest in the guard tower up the road. She could hear Sergeant Durnstoffer ordering the men downstairs to brace the doors, but just as she began to hope they might not get in, something twice the height of a man lumbered out onto the street. Moonlight glinted off patches of grimy skin. Crude stitches held its constituent body parts together. It seemed to be half-rat, half-ogre, its snout twitching and snorting whenever one of its handlers goaded it onward. The handgunners on the tower saw it too, and opened fire. The bullets had little discernable effect.

Amelia realised she had two choices: one was to seek out its soulflame in the aether and snuff it out, the other was to get to the carrier pigeon coop on the roof and send word that the beasts of the old capital were abroad.

Using magic was too risky. She was still groggy, and a serious miscast could kill everyone in the building. She scrambled up the stairs to the roof.

As she reached the coop, the building shook to the crash of splintering wood. She could only assume the ogre had battered its way through the door. She grabbed a quill and inkpot from the locker and wrote: 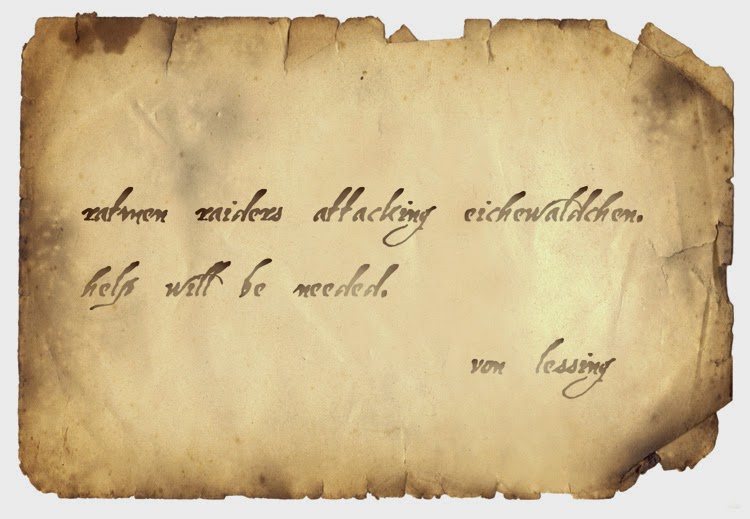 There were two pigeons in the cage marked Fort Schippel, one of which flew straight out as soon as the door was open. It collided with her chest, spun through the air flapping wildly, and was off over the rooftops. Recovering, Amelia reached into the cage and retrieved the other one, sliding the rolled-up note into the tube tied to its ankle. The bird looked sideways at her as she worked, its head twitching this way and that, and then it was off. She swore as it started north, but it turned southeast after a moment. She watched it depart with some satisfaction, and turned around to grab her scythe-staff.

A cloaked figure sprang up onto the roof almost too quickly for her eyes to follow it. She made a wild swing with her scythe, but the cloaked figure rolled under it, and a split second later, she felt a blow land at the back of her neck. Her vision darkened at the sides, and she collapsed.

She drifted in and out of consciousness. Strong hands carried her through the tavern hall, now awash with blood. Young Bruger’s lifeless eyes stared back at her.

She woke again. Stars between the clouds. The head of a rat-man directly above. Movement. She was on a stretcher, bound. Her captor saw her open eyes, and said something in his rasping, high-pitched language. The hooded rat soon came, and sprinkled foul-smelling dust over her face. She coughed, and faded out again.

With a clinking of chain links, she sat up and rubbed the back of her neck. She was in a cage four paces across, illuminated by some distant torches on the wall opposite, and a dull green light from above. The cage to her left held a group of men speaking Brettonian, and to her right, a lone dwarf with bruised eyes and a split lip.

Looking up, she saw the source of the green light: a lump of warpstone the size of an infant hung above her cage. The message was obvious: if she tried to channel any power, the warpstone would amplify it far beyond her control. Mutation would be the least of her concerns. The urge to cry out for help became almost irrepressible, but she quashed it. She didn’t want to give the rat-men the satisfaction of knowing just how frightened she was.

“Parlez-vous Brettoni?” one of the prisoners asked.
She looked up at the Brettonian with a start. “No,” she replied. “Reikspiel?”
“Non.”

She wondered if Durnstoffer had survived. Probably not. They hadn’t taken anyone else prisoner, it seemed, and that meant they’d come for her. Just her. Durnstoffer’s patrol lay dead or dying in Eichewaldchen, and all because they’d taken a wizard with them.

Clenching her jaw, she promised herself that the rat-men would gain nothing from her capture; nothing whatsoever.