By Charlie December 15, 2015
You'd be forgiven for assuming that reports of my death are not even slightly exaggerated. 2015 has not been a blog-heavy year!

Of course part of the reason for that was that 2015 wasn't very hobby-heavy either. My focus lay elsewhere: roleplaying games, Elite: Dangerous, and professional sitting (which is like normal sitting, but where you convince yourself you aren't wasting time, or at least, don't think about how much time you're wasting until after you've wasted it).

That said, I do have two minor updates. The first is that I have embarked upon my biggest single model ever. It's a huge project, and will take many more months to complete, but here are some sneak peeks: 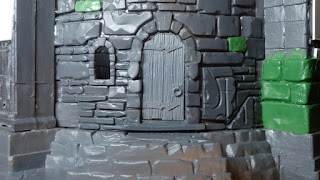 The second thing concerns the Beard Bunker's long-running Warhammer campaign. The Old World is still turning here at the Bunker, its inhabitants now certain that the whole End Times/Age of Sigmar thing was just a cheese dream.

In the past, a number of campaign updates have been provided by both short stories and mock-newspapers. Those have been fun but time-consuming, and whilst I may yet do some in the future, they were purely intended as an engaging way to provide our gaming group with updates on campaign events. For their intended job, they weren't actually all that effective, not least of which because those formats preclude concise, broad brush strokes.

To that end, I have created a campaign wiki, thanks entirely to the generosity and technical skill of Tom (known on this blog for his halfling character Cedric Sneakfoot). The wiki has the campaign's current state of affairs on its front page, a chronicle that records all the major events of the story so far, and also of course has the potential for the story's participants to add whatever details they wish about characters or events.

The wiki is still in a somewhat embryonic state, but the major events are all there, including those alluded to in recent narrative posts, so if you're curious to find out what happened to Amelia after she was abducted, click through the link below:

You might also have noted that I've put links to both the Hochland campaign and the Cetus sub-sector in a perma-link on the top right of the page.

That's all for today. Hopefully I'll return soon with further progress to report on said giant project. How was 2015 for anyone still reading this rather neglected blog? How did Age of Sigmar affect your hobby?