In March, I declared I was “about to embark upon a campaign which will be a 50-50 mix of wargame and roleplay. Like Hornblower in space, what with BFG always harking back to the Age of Sail.” At the time, several of you asked how I planned to run it. Well, we finished the campaign last month, which means I’m now in a position to look back on the whole thing and share what worked and what fizzled. Mostly it worked… mostly.

The problem is that there are so many things I could talk about. I’ve made multiple attempts at writing this post, and all of them have descended into a sprawling ramble. I’m left with no choice but to resort to democracy. Oh how the High Lords of Terra would disapprove.

It seems to me that talking about this campaign could be broken down into the following topics. If you’re actually keen to hear my oh-so-wise thoughts on any of the following subjects, leave a comment, and I’ll express myself all over that particular area like an elephant seal landing on a squirrel.

Conspicuously missing from that list is an explanation of the campaign rules themselves. That’s because it’s the one part of the whole shebang that was incredibly simple: we used the Battlefleet Gothic rules for the space battles and ship experience, but no rules at all for the roleplay side of things, despite the existence of various 40k-friendly RPGs.

I’m not averse to having game rules for social situations in RPGs, but in a Hornblower-esque story, much of the narrative centers on the relationships between the ship’s officers, which are revealed through little gestures and snippets of conversation, be it on the bridge or around the dining table. It would’ve felt weirdly unsubtle to say “roll me a social perception check.” Instead, it was up to Jon and Maisey to pick up on whatever hints I gave by the way I described things, and for me to react to the way they dealt with their crew.

Finally, you will have noted the presence of some hitherto unmentioned eldar ships in the photo above. That’s because I painted them in secret and had them turn up during a battle. Here’s another photo of the eldar ships in all their pristine glory: 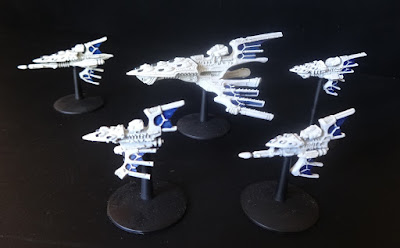 Since their ships are made of wraithbone, I braved the dreaded white primer spray. It’s not obvious from the photo, but the ships have had all the crevices lovingly painted with a bone/brown shade, and the sails are semi-metallic and glossy. The intention was to get as close to a solar panel as possible. You’d probably need video footage to see how that works. Or your imagination.

Finally, one issue with the prow cannons on eldar ships is that they’re quite tall, largely to avoid having fragile gun barrels and undercuts. To get around this problem, I painted some of the guns as though they’re double-barrelled, as exemplified by this hellebore-class frigate: 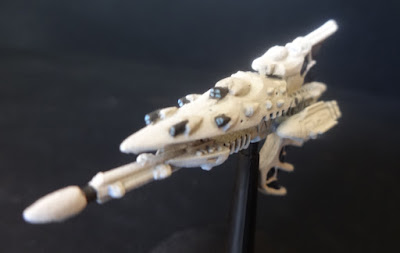 OK, that’s all from me for now. Did any of the five subjects mentioned above hold any interest for you? Let me know in the comments, and I’ll get blogging.

Given how long it’s been since my last post, I will of course be unsurprised if the comments section ends up being filled with nothing but crickets and tumbleweed, and I have no one to blame but myself. Bad Charlie.