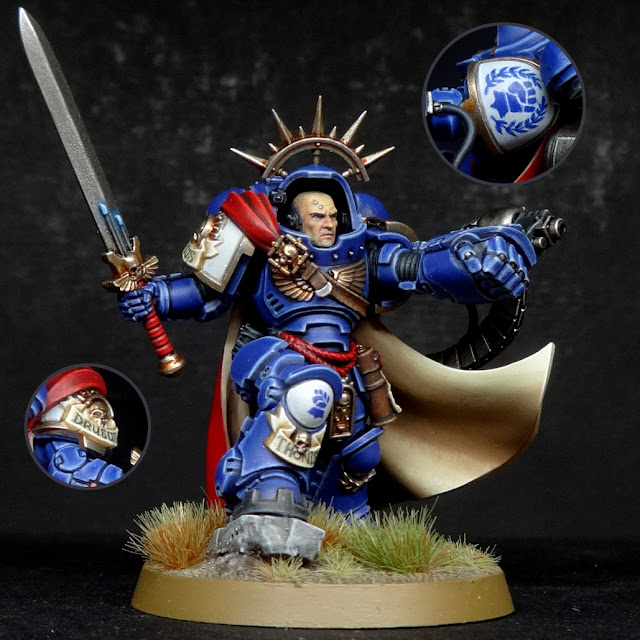 A six month ork-painting bender left me in the mood for something altogether more crisp and defined. My skills seem to have atrophied somewhat during that time, and I found myself making all sorts of mistakes I wasn't previously making, but ultimately I have emerged with my first new space marine since February: Cobalt Scions Chapter Master Tiberius Drusus.

Today's post will cover the modest conversion and magnetisation work, some notes on the painting, and (of course) the lore: who is Drusus, and why is he full of doubt?

The word 'conversion' might be a bit of a stretch, but: some green stuff work was needed to fill in the socket on his exhaust vent left by forgoing the servo-skull. It's cool and all, but I felt it made the model's silhouette too messy.
Helmets are sensible things for sensible people, but for characters in particular I do love being able to see a face. The face that comes with the kit is compellingly brutish, but not right for Drusus. Instead I've used the head from the Primaris Ancient kit, and it's an incredible bit of sculpting.
Finally, and most ambitiously, I magnetised his off-hand weapons. I say ambitiously because the width of magnets needed for a solid join gave me little room for error, but it was well worth the effort... particularly since Lucullus, the other captain in my roster, lets me use rearm & resupply for free. Drusus can stride into his arming chamber and pick and choose between crusade games, and I love it. Best Crusade upgrade ever.
Of course Drusus can't start out in a campaign as a chapter master rules-wise, so I'm going to have to level him up first. To explain that, I've tried to make him a character with room to grow into his role, as covered in the lore section further down. 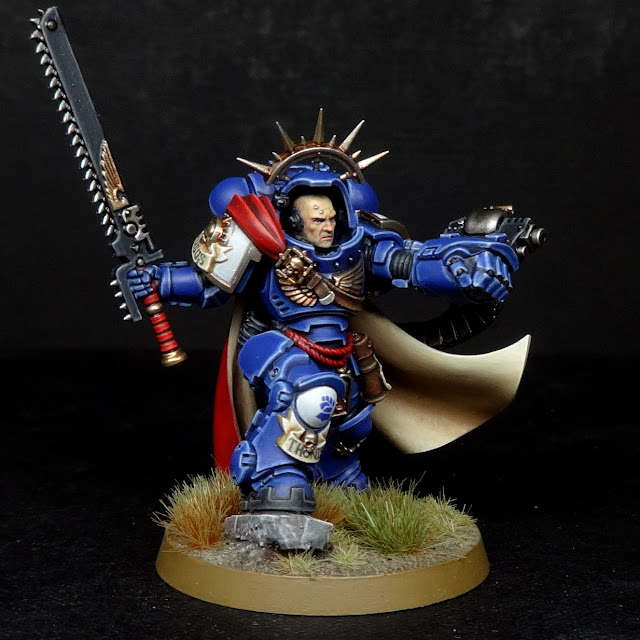 This was in line with the other Scions. There's tutorials for the blue armour here, and recipes for all areas of the model here. After six months of not painting marines, it's fair to say I was rusty. Mistakes were made, particularly on the cloak lining, which I ended up having to do twice.
Waaaaa no sub assemblies
Another serious challenge when painting this lad is that I couldn't see a sensible way to paint in sub-assemblies without ending up with some problematic joins. That meant some pretty fiddly painting; trying to layer up fabric and armour highlights behind ammo belts and the like made for slow, careful work. The face also had to be painted in situ, and it really made a difference to the level of precision I was able to achieve, but I'm happy with the final result.
Heraldry & a deliberate lack of weathering
With the rest of the army I've been doing a reasonable amount of weathering, namely: armour chipping and muddy boots. As I'll cover in the lore section, Drusus hasn't been in the field for a few years at this point, so I wanted to present his wargear as being more pristine than everyone else's. Each time he gains a rank in Crusade, I intend to add a little more weathering. I won't go crazy, though, since I imagine the Chapter Master would be well looked after.
Given his rank it was tempting to add more bling to the painting, but that wouldn't suit his character. Instead I made subtler changes to the usual heraldry. The chapter badge incorporates a laurel wreath, and his left kneepad - usually used by Cobalt Scions to denote their company - is just pure blue, as he doesn't have a company. Instead I painted a smaller version of the chapter badge on his right kneepad, and added the name of the the Scions' homeworld Thonis on the banner beneath. 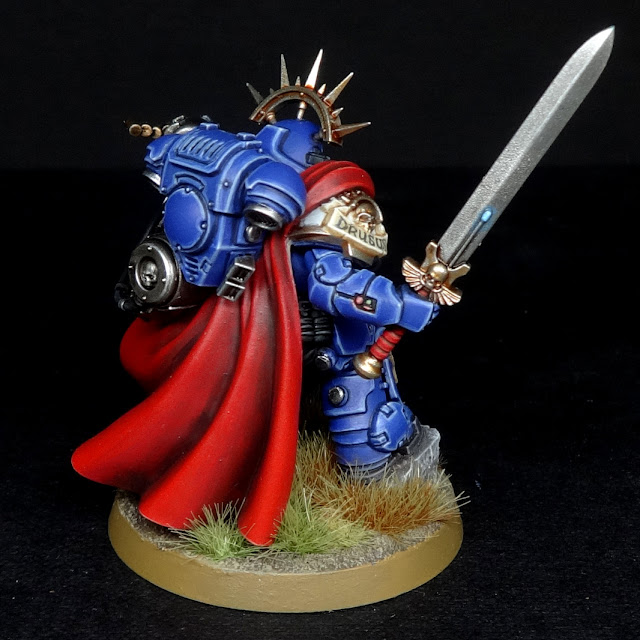 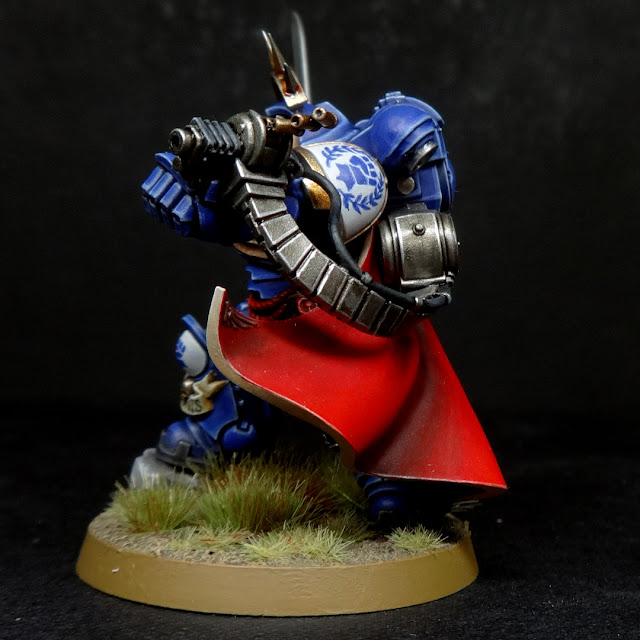 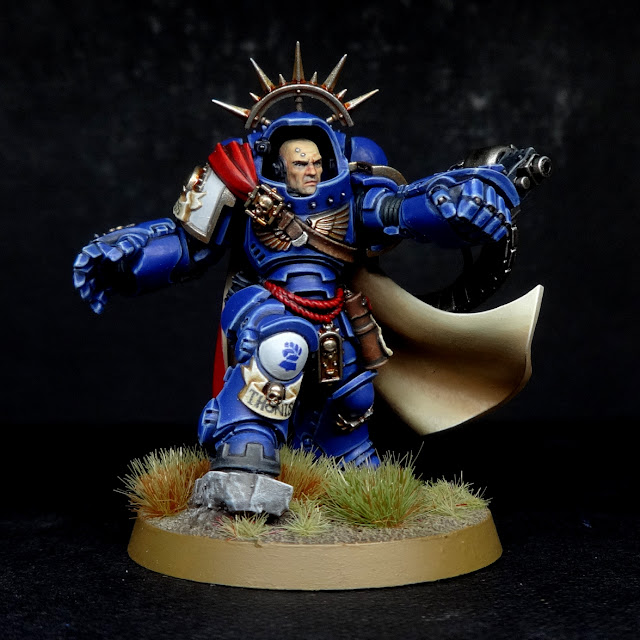 I've just used Drusus in his first game - against Andy's fledgling Alpha Legion force - and he acquitted himself well, killing the Master of Possession, somehow surviving the Venom Crawler's charge with one wound remaining, and then slicing its legs off. Bloody heroic.
What's getting painted next? No idea. Could be terrain, could be more Scions, could be more Goffs. That's the nice thing about having two armies at a serviceable size - there's no obligation to get anything done, it's driven entirely by whatever looks fun on any given day. Luxury.