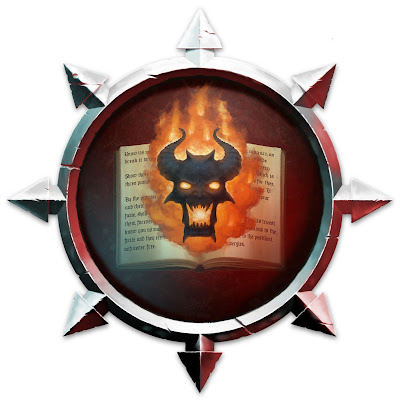 With the news that Jeff's coming up to Oxford in October,  and  that he's finally bringing his Word Bearers to battle, we decided a week-long campaign was in order. Everyone's now desperately preparing things. Most of them are preparing miniatures like normal hobbyists, whereas I, dear reader, have been doing nothing but Photoshop for the better part of a week.
My poor eyes.
Whatever, I love this shit. Two things were needed: icons for all the armies, and a campaign map. Jeff and Harvey and I sat down on Discord to hash out the broad brushstrokes, and they are this: the Word Bearers see the Eridani sector as resource-rich and comparatively vulnerable, with the one problem of being irritatingly distant.
They have an evil plan to address this shortcoming.
Lachesis Prime, like all the worlds of the Graiae sub-sector, produces a disproportionate volume of psykers. The Word Bearers intend to use this as an energy source for a ritual that could collapse Lachesis' smallest moon and turn it into a warp gateway facilitating fast, reliable travel for Chaos vessels wanting to raid the region. The Imperium are entirely unaware of their plan, and will initially be assuming it's just a violent raid. If Chaos win 60% of their games, and get at least one victory on each of this hemisphere's three Scholastika Psykana facilities, then it's gateway o'clock. Any other result is still bad news for the planet, but to really minimise the damage the Imperium must win 75% of their games - a tall order!

This is a mix of three different sources: SpaceEngine for the image of the planet, the Midjourney AI for the location portraits, and then Photoshop to produce the HUD elements, metal frames, and city lights. 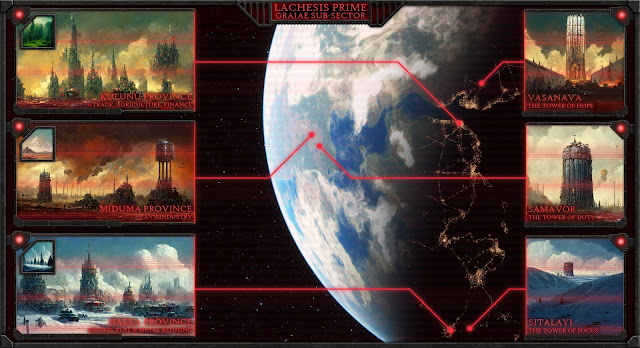 Midjourney AI
If you're not familiar, this is a Discord bot that takes text prompts from you and then interprets those prompts into an image. Results range from the hilariously useless to the most disturbing end of Uncanny Valley. It's best at impressionistic landscapes and cityscapes in my experience, but can occasionally make a portrait work if you squint hard enough and shrink it down to a thumbnail. Even with these landscapes, there was a lot of banging the retry button until the AI iterated into something that wasn't nonsense, but such is the nature of AI.
In case you're curious, here are the text prompts I gave it:
The Photoshop elements
The city lights were reasonably simple, if laborious:

The red HUD elements are easy - just draw a plain white shape, colourise it, then add gaussian blurs just as described in the final city lights caption above.
Far more complex are the metal frames for that classic 90s sci fi UI vibe. I began by making a dark brown-grey texture image - just lost of texture brushes in various greys, blacks and browns. I then would draw out a shape using the lassoo tool, and copy a chunk from my texture layer.
To highlight the shape, I'd add a 3-pixel line with the brush tool with brush texture switched on, then another pure white 1px line at the top of the highlight, then a plain 3px line in black to the bottom edges. I also made a little image of a rivet that I could copy and paste quickly, since the Imperium loves rivets. There were lots of other little elements and details, but that's the gist of the process.

Next up, here are the three new faction icons for the Chaos lads, all painted from scratch in Photoshop:

My general approach to painting this is not dissimilar to painting a miniature: I started blocking out shapes with a dark shade, then layered up the designs (making EXTREMELY FREQUENT trips to my reference images). I was generally painting with a dry media brush at 30% opacity, then switching down to 15% opacity when I needed to get a fade smoother. To speed up the workflow I'd generally have colour swatches on a separate layer so I could quickly select different colours, as shown below: 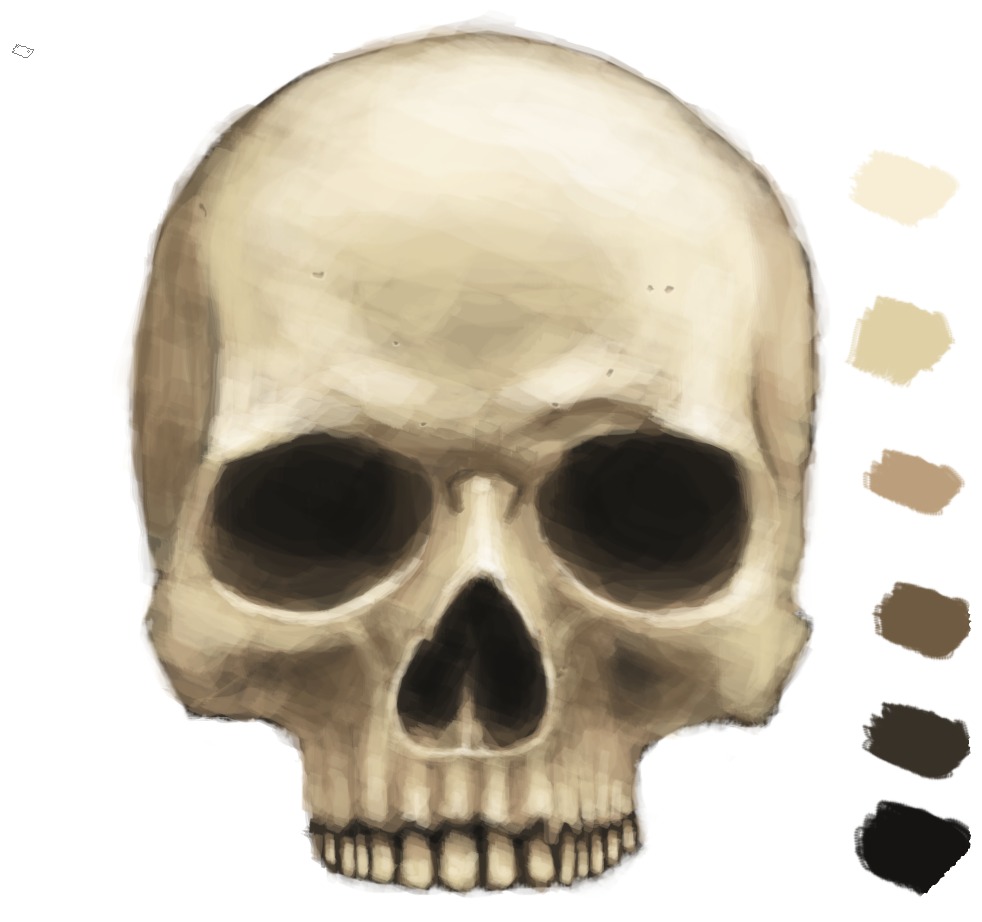 It's been a good while since I was doing much digital painting, so the Word Bearers image took me a while, whereas the similarly complex Night Lords image took five hours. The alpha legion one, of course, was nice and quick since I just kept it simple and weathered up the basic Alpha Legion icon. Ain't nobody got time to start painting individual scales and facial features on a fully rendered hydra.

I've still got more to do, specifically faction icons for Harvey and Tom's respective Imperial Guard regiments. I will try to be less over-ambitious with them. Grins nervously. There's also some minis I could paint up for my Cobalt Scions army, but since that's already a good size,  those are in the 'nice to have' camp.
It was torture watching Jeff paint up his gorgeous Word Bearers army during lockdown, when I couldn't play him, so I'm extremely pumped that the hour is finally nigh. Vengeance for Calth, bum-face!