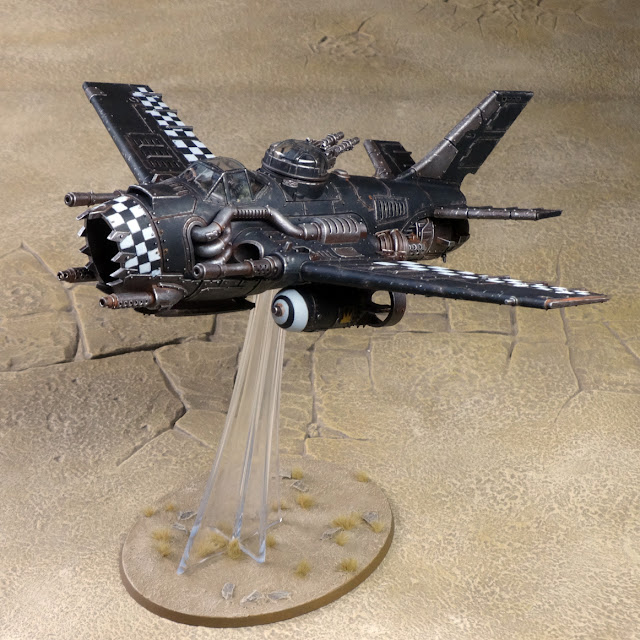 Even as a yoof, Brrt was obsessed with dakka and explosions, and he could never get enough. Shootas: not enough dakka. Big shootas: still not enough dakka. Warbikes were pretty good, but he needed more. He was convinced an aircraft would be the way to go. Not least of which because fighta-bommers also did that amazing thing where they dived down and dropped bombs on things, which Brrt found to be compellingly fast and loud.

There was one problem: the Boss. Sirrus' initial interest dried up after almost all of Brrt's early experiments resulted in crashes. It made air power look expensive and ineffective, and the boss didn't like those two things. He also didn't like scientifically rigorous sample sizes, since that meant even more expense. Choppas were cheap, and ladz were plentiful. The crashes did look undeniably metal, but ultimately, the boss had responsibilities. A thoroughly disappointed (and vigorously concussed) Brrt was told to go back to his big shoota, and keep his boots firmly on the ground.
Stupid landings thought Brrt, foggily.
Brrt's dream never died, even if his memory wasn't what it was before all the crashes. He kept an ear to the ground for opportunities to change the boss' mind. His patience was finally rewarded when the Metalwaaagh teamed up with the Two Wurlds Waaagh. The Blood Axes, keen proponents of something called 'kombined harms,' had solved the landing problem: catch the jets in mid-air with traktor kannons mounted on special towers. The traktor beams would then lower the aircraft safely to the ground. Brrt immediately sought Sirrus out, forgot what he was about to say, went back to look at the airfield, had the same thought again, and returned. Reasoning that this new approach might work, and willing to risk the Metalwaaagh's most forgetful ork to test the theory, Sirrus gave Brrt the necessary gubbinz to do some testing, and tasked Krom Bignooz the Biggest Big Mek with building the whole traktor kannon tower thingy.*
Noticing that Brrt wasn't all there, Krom built the fighta-bommer to incorporate a grot turret so that there'd be someone disposable on hand to do the thinking. Several more crashes followed, one of which cost Brrt a foot, but Turret Grot the Third turned out to have a knack for talking Brrt through everything. Said grot was dubbed Musty after his first flight; Brrt's enthusiastic manoeuvres had digestive consequences for Musty, and those consequences had some time to dry before landing. He soon adapted, however, and moreover learnt that, while airborne, he could insult Brrt from the safety of his turret, and the battered old dakkafreak would forget all about it by the time they landed. These unlikely test pilots were the Metalwaagh's first aeronauts, but they certainly wouldn't be the last. Strike anywhere, strike anything: a strong component of Kombined Harms. Sirrus and his Metalwaaagh were becoming a truly organised military force, all thanks to one forgetful flyboy and his bitchy turret grot.
+ + + 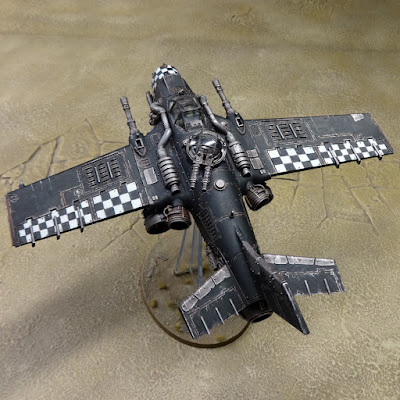 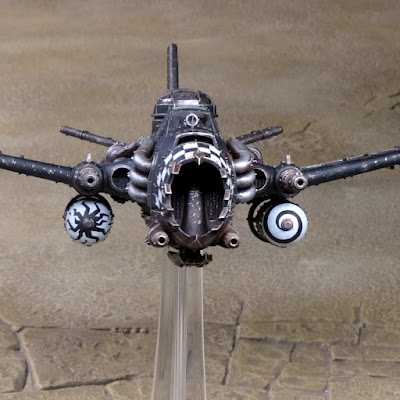 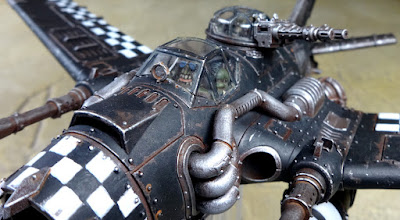 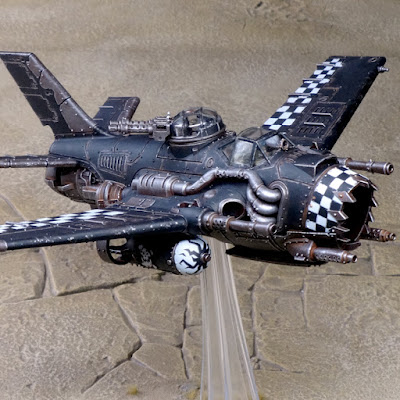 There's not much for me to say about the modelling and painting; it's just a repeat of the scheme I outlined in my post on the sophomore squad. Sharp-eyed nerds will notice that this isn't a legal plane build. Since the big bombs on the blitza-bommer (the dive bomber) are functionally useless, I'm using this as a dakkajet with 6 guns. The bombs come off if anyone gets confused; I added them because (a) I like how they look, and (b) dive bombers are badass.
In retrospect the one thing I'm not 100% happy with is the checks on the outermost wing flaps. With a break in the flaps I figured I'd just start the pattern again, but as a result it looks a bit like I fluffed up and skipped a row. Ah well, I'm happy enough with the finished jet and its big honking exhausts.
This was a slog to paint, as it's a lot of surface area, but now it's finished I feel pumped about my Goffs and am excited to do more. For now, though, preparations must be made. Jeff and his Word Bearers are coming up next week, and my Cobalt Scions must be ready to meet them in GLORIOUS BATTIL.
____________________________
*Rumour has it that someone once asked Sirrus why they didn't just put wheels on the planes to stabilise the landings, to which allegedly Sirrus merely shrugged and professed not to have much interest in aviation.