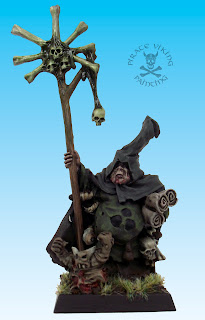 Well, a sorcerer at any rate.This charming (if a little drippy) chap is Lothar Pneumophilus, Sorcerer of Nurgle and one of the powers behind my Chaos Lord's throne. The model has had no modifications of any sort as he is a splendid sculpt. The only addition is the wee nurgling chap at the front representing the Warrior Familiar that he has in the list. I actually auditioned Nurglings that I had lying around to see which looked best. My wife and flatmates giving me very odd looks as I ran "Nurgling Idol". Painting started with the clothing. I intend to use what I call "Andy Green" - named for Andy of Lair of the Breviks fame - for the main army colour. This colour starts with a basecoat of Charadon Granite so every piece of cloth was basecoated in one go. I intended to use Charadon Granite as the basis for all of the colours on the model to bind it together.

Working on the principle of painting inside to out I first darkened the under-robe down to black with many layers of Badab Black. Then the main robe was worked up to Andy Green. This is done using the following process: Wash the Charadon Granite basecoat with Devlan Mud, rehighlight all but the shadows with Charadon Granite then sequentially highlight first with a 50:50 mix of Charadon Granite and Catachan Green, then with pure Catachan Green. Moving into the high points we then make a 50:50 Catachan and Camo Green mix and follow that with pure Camo Green. Final highlights are with Camo Green and Dheneb Stone. Eight stages. Yes I know that is a lot but it goes quite quickly and creates a wonderful earthy, nurgle-ey green. 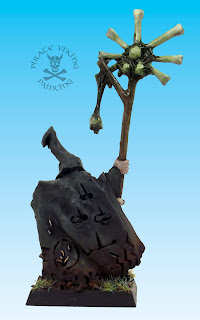 I then moved on to the cloak. I wanted a heavy, dark, canvas look to the fabric. Mixing Codex Grey into the Charadon Granite acheived a nice brown-ey grey. I then glazed the finished fabric with a thinned mix Thraka Green and Badab Black. The weathering on the bottom of the cloak was done after all the other steps were finished. I used Forgeworld weathering powders (light earth and dark earth) to add the dried earth. The wetter mud at the edge are a mix of gloss varnish and dark earth and then an edge of Devlan Mud. 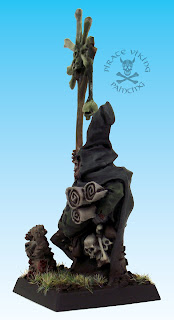 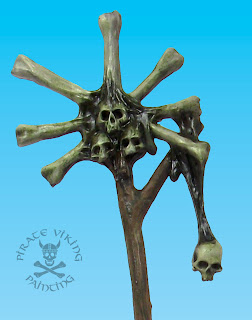 The staff top is glued together with some nasty, slimey fluid. Ick. Base coated in Catachan Green the ick was then glazed with AK Interactive Slimy Grime Dark. This is an enamel product that allows you to fade out the effect by "stumping" - gradually removing paint - with odourless turpentine. A hit of gloss varnish finished it off and left it with a slimey finish to the entire piece. 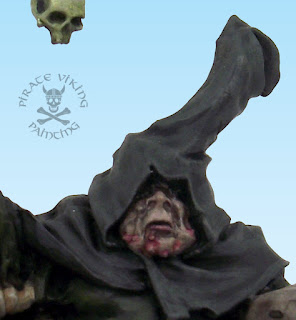 The face of the model shows the corruption and noisome foulness of the flesh that lies within. I wanted it to look bloated but bloodless. Normally overweight people are pinker but I wanted him to look ill, really ill. I started from a mix of Tallarn Flesh and Dheneb Stone as a basecoat. Then a wash of Ogryn Flesh and Thraka Green to send him green about the gills. The eye sockets were glazed with Leviathan Purple to make him look tired and the deep recesses were shaded with Devlan Mud. I then highlighted with the original skin mix and then again with a little more Dheneb Stone added. I washed the beard of boils with a couple of thin coats of Baal Red which self highlighted with the top skin colour. The lips were glazed first in Leviathan Purple then with thin Baal Red. A highlight of the skin colour knocks the colour back into the skin to stop it being too bold. A final very thin glaze of Thraka Green finished the skin tone nicely. 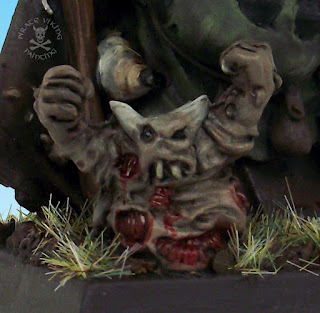 The last element to be painted were the maggots (Vallejo Deck Tan washed in Gryphonne Sepia and rehighlighted with Deck Tan) and the Nurgling. The Nurgling was painted with a 60:40 Tallarn Flesh and Catachan Green mix and then highlighted by adding bone to the mix. Deep recesses were picked out with thinned Devlan Mud. The exposed flesh and viscera were glazed with two coats of my blood mix - 4:1 Red Ink to Chestnut Ink. Picking out the bone and black eyes finished him off.

This model effectively sets the colour scheme of the army, add some rust (well, a lot of rust) and this is what the army will look like. I want to add some slushy melting snow to the base to give a nice contrast to the very dark colour scheme but that will have to wait until I buy some water effects. I'm going to share the progress of the army in my usual way - by marking off completed models on an image of the army list like so:

Try it sometime, it is incredibly cathartic and helps to make the progress on your army seem more manageable. Given that I break the army up into smaller elements and do this with the smaller elements too it seems to go much faster!

Until next time folks.