By Jeff June 08, 2013
The following account is excerted from the papers of Hochland intelligence gathering reporting to Aldebrand Ludenhof, Elector of Hochland, and concern the events of June 7th of this year. 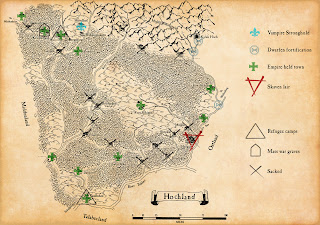 As you will know my Lord, Goblin activity in Hochland is no longer confined to the Eastern reaches. There has been a troubling increase in reported attacks along the Old Forest Road. To this end Captain Oscar Brandt was dispatched to bring these filth to heel and open vital lines of communication between Fort Schippel and Bergsberg. Our assumption was that the tribes operating in this area would be the same incompetant scum seen along the Eastern Drakwald. Sadly, it seems not to have been the case. This was the last official report to come from the column:


"Goblins sighted, typical ignorant tactics, simply marching up the road to meet us. Am deploying column to repell. Master Von Rudinger to harry the flanks and cut off lines of retreat."

A day or so later, scouts find a grotesque totem pile of mutilated bodies, a crude moon carved into the chests of the dead. One had a scroll of parchment tied into it's fist. On the back of a prayer scroll of protection was a letter of sorts. I regret to report that its contents make for grim reading:


"My name is Alfred, Blind Alfred to my friends in the Powder Kegs. I'm being made to write this to show the world that the humans cannot stop the Bitter Moon doing what they want, when they want. Our column had been deployed against the goblins. They were advancing slowly and openly.

We took it to be typical goblin idiocy. But the Bitter Moon are too smart for that. Their Blackhead spider tribe subjects were hidden in the trees and the God Spider made merry feast of the metal men on their stamping horses.


Though your metal thunder shattered many Blackhead boys, the Bitter Moon fear not your toys. For the Great Warlord Rhaget Neckchopper is with us and his fury carves the wound feast through your men. None could stand in his path. Not barking men, not crossbow men, not even proud metal man on his horse.

Our scouts have since found Captain Brandt and the remains of his men alive and well although badly rattled. It seems that the Goblin warlord is a fearsome foe and that luck was simply not with them. Their engineer seemed to badly fail at preparing the Hellblaster as it failed spectacularly. We also found the near dead form of Master Earhart Von Rudinger being dragged through the woods by a terrified steed. While nearly insensible with pain it appears that this Rhagat Neckchopper has the services of both a titanic spider and one of the woodland giants. Von Rudinger had driven off the spider and toppled the giant but when he challenged the warlord it was a fight too far.

Intelligence has identified the name of the Bitter Moons as being a minor tribe from the Middenland region. We fear that they were displaced from Middenland by Archaeon's march and are now here in Hochland. Rhagat was not the warlord of the Middenland Bitter Moons, we do not know where he came from or how he came to command but we feel that his ruthless efficacy and his skill at arms make him a fell foe and one that must be watched carefully and repelled when convenient.

<authors note, hell yeah my night gobbos kicked ass and took names! Hoo-rah! Charlie had some evil luck, the hellblaster exploding was funny (mainly because it also took out a whole pile of spider riders as well) but the Arachnarok causing the entire left flank to flee when it ate the knights was just unlucky.>