...from the Bloodied Sands of the Arena

By Maisey June 30, 2013
As Jeff talked about in an earlier post on the fantastic Pirate Viking Painting (Found Here) some of the Beard Bunker Dwellers are going to be working on small Dark Eldar skirmish armies this year. As a result of my fairly emphatic army builds last year, my hobby has been fairly slow this year, just some sedate work on my Dark Angels. However, I've finally found me some hobby juice in the Dark Eldar project. The idea has been slowly simmering away in the back of my brain to do a Wych Cult army based around the grand gladiator arenas of Commorragh.

Here are the first few models of the main Wyches unit. I've gone for an uncharacteristically bright colour scheme. For both me and the Dark Eldar bright colours are something we just don't get on with. However I wanted to, as a painter, try something outside of my normal repertoire. As for the background for the army, well these people are performers. Sure they are murderous, callous, and very dangerous but they are also artists and entertainers. So bright, flashy colours to draw attention to themselves as they gracefully reek bloody havoc in the arena seemed appropriate. 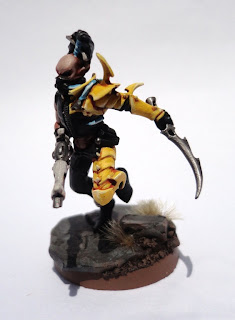 The main yellow of the armour is a base of Averland Sunset, washed with Casendora Yellow then layered up with Flash Gitz Yellow with increasing amounts of white added for the highlights. I've added some Ice Blue touches as the complimenting colour. The black was a straight forward Abaddon Black with an Abaddon Balack/Thunder Hawk Blue mix to highlight. 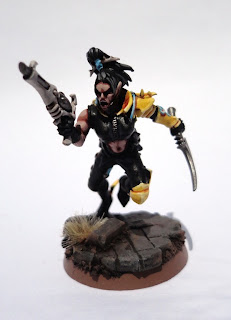 Since this army is intended to be a 500pts skirmish force and will total about 20 models including transports, I've decided to be a bit more elaborate with the basing. As anyone who has read any of my previous posts will know, I loath basing. That's not to say that I don't appreciate the effect of a well done base, but I find the process of basing a complete chore. I will do just enough to get by, but not this time. I've invested in some lovely resin casts from Fantascape. Ok, yes, I admit it, I'm getting someone else to do the work and this is still very lazy on my part. Point is, they have beautiful bases! 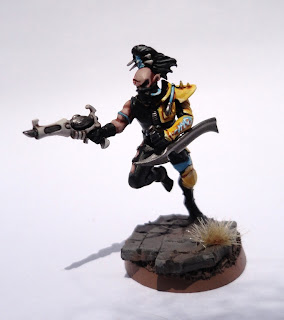 So now I'm going to crack on with the next batch, which will include the Hekatrix and the unit specialists. Once they are done I'll investigate what tanks are available to the Dark Eldar and get me one of those.  Looking forward to doing some whooshy, floaty tanks!