Finally, the Empire Flagellants are finished. Yay! In celebration, I shall sing the Doom Song.

But there's one problem: all the other regiments in the Hochland army have a certain individuality to them. The Blades of Taal are common blokes made to dress posh by their commander, and the Powderkegs are a motley assemblage of semi-competent rejects. Each game they're involved in will be the next chapter of their story, and no matter how badly they're mauled, I'll usually think up some guff about how at least some of them escaped and lived on to fight the next battle. 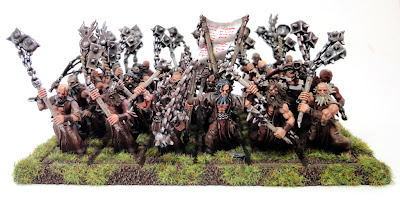 Flagellants, on the other hand, are suicidal fundamentalists unlikely to survive game turn two, never mind a whole engagement. It'd seem ridiculous to spend ages writing a backstory for some doom-saying prophet who's going to do his best to hump the bad guys' spears at the first opportunity. 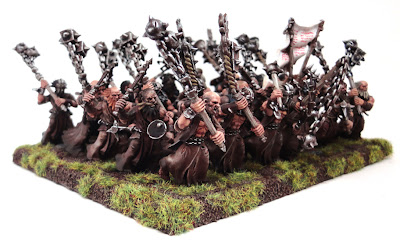 So, instead, why not have a different cult for every wargaming occasion? Ladies and Gentleblokes, may I present you with the Cult-o-Matic 9000. It's like a flow chart with dice. Before each game in which I use my thirty-man regiment of flagellants, I shall roll on the table below to find out that they are...

...whose leader believes that...

1. Karl Franz has been supplanted by a witch.
2. he’s Sigmar.
3. the old gods (Taal, Shallya, Ulric etc) are impure, as is anyone who worships them.
4. it’s his solemn duty to fornicate with his followers’ wives.
5. you must donate all your worldly possessions to his cult in order to attain salvation.
6. the world will end in three and a half days' time.

The only conversion to speak of is the regiment's Prophet of Doom: 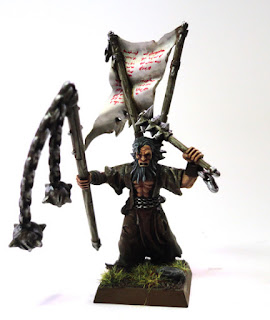 I wanted him to be waving a completely impractical assortment of jangly weaponry about, like the raving loony he blatantly is, and that also meant opening up his pose (all the normal flagellant arms go straight forwards). I pinned the arms outwards, and then sculpted ragged sleeves onto his sackcloth robes to cover up the pins.

The painting itself was pretty simple - the models were all sprayed with a mid-brown (I used the now-obsolete Calthan Brown), after which the fabrics got drybrushed with a lighter bone colour. After that, some watered-down colours (yellows, blues, dark reds) were sloshed over the drybrushed cloth to add variety. I also tried to vary the skin tones a little, since there's so much flesh in the unit, and kept the metalwork filth-tastic by drybrushing over the brown. The regiment also has a lot more stubble effects than the rest of the army, which not only made them look grimier, but had the added advantage of introducing some variety into the repeated uses of distinctively-sculpted heads. Finally, I drybrushed some dark mud around the hems of their robes, because you can never have too much filth where these idiots are concerned. 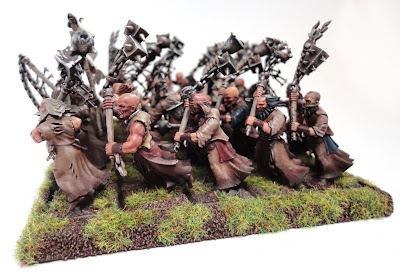 I can't wait to use these fools in a battle.