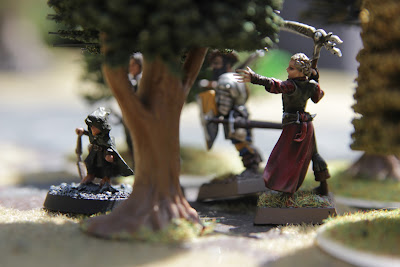 It was one of the hottest, sunniest, most beautiful days of the year. One can’t take these things for granted in Britain. The problem? Four of my oldest friends were converging on my little house for the weekend to play some wargames, and wargaming isn’t a famously outdoorsy pursuit. The solution?

Take the table outside and play on the patio.

We even made an awning/parasol by stringing some bedsheets off the clothesline, although gravity and our drive-by workmanship meant that it didn’t last. Sunburn and sheer relentless heat eventually forced us back inside, but the important thing was that we had very civilised fun.

And which scenario should we choose to play in this glorious sunshine but something set in the dead of night, of course. I shall describe it here in the hopes that it might provide some inspiration for anyone looking to do something outside your standard garden-variety Warhammer battle. 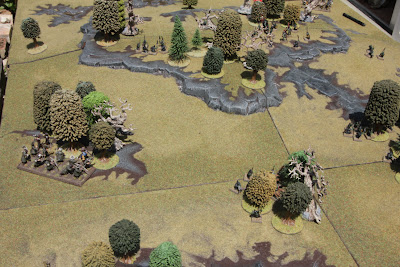 It’s pretty much impossible to tell what’s going on in the photo above, so let me provide some context.

In Bad Day on the Old Forest Road, a previously unknown and thoroughly vicious tribe of goblins known as the ‘Bittermoons’ claimed dominion over a chunk of Northwestern Hochland, and proceeded to beat the snot out of the first proper army sent in to clear them out. I blame the massive spider. Anyway, during my humiliating defeat, the Powderkegs broke from combat, and Blind Alfred the standard bearer was taken captive. Sad face.

Captain Brandt, being rather attached to the old codger, asked for volunteers to assist in a (rather optimistic) rescue. This rather swiftly got the approval of Count Ludenhof, who liked the morale boost that would come from an officer being seen to risk his neck for a few common soldiers. As such, he asked Dwalin to send Cedric Sneakfoot to ensure the mission’s success.

With the help of Amelia, Fabian, and Stefan Rainer – a captain of Nordland whose arrival in Hochland seemed to put Amelia on edge – Oskar managed to sneak into the Bittermoons’ camp. Jeff acted as GM and set up a full six-foot table for us to sneak through, ensuring that roving patrols and sentries made life somewhat fraught. Mostly we avoided sentries so as not to risk raising the alarm, but at various points the heroes set ambushes for any patrols that were just impossible to avoid.

Jeff maintained a properly goblin-y atmosphere; the campfires all used the animosity rules, and several of them occasionally broke out in punch-ups over servings of mushroom soup and ratbitz. Likewise, the sentries suffered from Goblin Quality (TM), in that they’d roll a scatter dice and a D6 each turn to determine where they were looking during the rescuers’ turn. If their dice rolled a 1, there was a 50/50 chance – on a subsequent roll of 1-3, they’d fall asleep. On a 4-6, they’d think they heard something coming from whatever direction they were now looking in, and would call a false alarm. This was amusing when the sentries had all the patrols running over to check out some empty woodland, but it was totally hilarious (and/or terrifying) when a goblin accidentally pointed at the copse in which all the heroes were standing and sounded the alarm.

Having gone ‘loud,’ Amelia cast the boosted version of Soulblight, reducing the effectiveness of the rabble of goblins running towards the rescue party as they sprang from cover to grab the prisoners. The area effect was somewhat charmingly represented by the shadow of Tom’s umbrella: 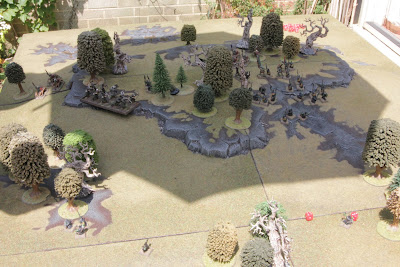 Consequently, the two captains sent the goblins packing, and the prisoners were saved. Like all well-run stealth scenarios, it was tense as hell, and just as amusing when the sneaky part went unexpectedly to pot. Thanks Jeff!

Over the rest of the weekend, we played a fair few campaign games (if you’re new here, and don’t know what the campaign is but enjoy narrative-type stuff, HERE is a good starting place). The resulting campaign updates, in brief, are as follows:

- The de Crécys have been hiding in Hovelhof after Amelia did a number on Phillippe. That said, they didn’t want these new goblins to destroy their crop of perfectly drinkable humans. Etienne and Mallick  went south thinking ‘pff, goblins, how hard can this be?’ which is, of course, exactly what I thought until I fought Raggatt Neckchoppa for the first time. They lost almost as hard as I did.

- Next up on the Goblin chopping block were the Hochlanders, coming back for a second try. This time, the Empire secured a thoroughly phyyric victory in which only five models – Erhard and four of the Silver Drakes – saw off half the goblin army single-handed.

- We also fought our first subterranean battle, ramming together enough rock scenery to make a tunnel in which the Stormbournes fought to shore up one of the underground approaches to Karak Hoch. Turns out the goblin shaman living under Karak Hoch has become so desperate to shift the Stormbournes that he’s resorted to bad, bad magic. Jeff had this to say about the scenario:

Jeff says: Well, well, by far the most curious part - story wise - was what the hell the possessed/mutant/vampiric Goblin creature Hafnir fought. The challenge combat was ace, one of those where we were both using the dice rolls to tell a story. Wound up with a mutant creature hanging from Hafnir's shield and the big man, hauling him off and smashing him down onto a table of shields raised by his men before finally, desperately, decapitating the creature. More scenearios will be needed before I find out what the hell the Blue Moons are doing underneath MY mountain!

- Back down south, Raggatt got overconfident, and decided to expand his already substantial territory. He marched on the ruins of Garssen, not realising that it had been fortified by reinforcements from Middenland. Turns out, massive spiders aren’t cannon-retardant. Heh, heh.

As of now, then, here’s the updated campaign map. Note the increasing numbers of re-inhabited Empire towns. Hochland may yet endure! 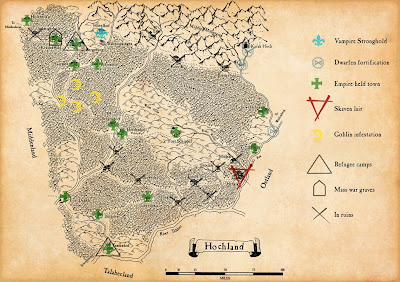 Finally, props to Mike and his camera skills, without which this post would be significantly less visually appealing.