By Charlie July 22, 2013
Some of you may be familiar with Tabletop World, but for those of you who aren’t: they’re two dudes based in Croatia who make ridiculously detailed 28mm fantasy terrain. Behold:


Pretty, no? Here’s the other facings of the buildings: 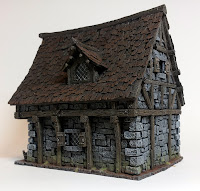 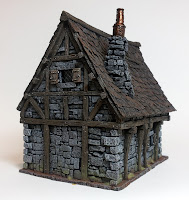 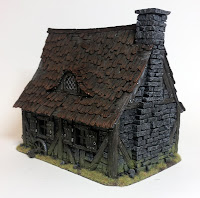 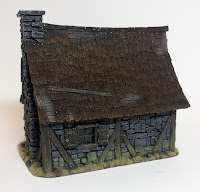 Assembly
Since these were resin pieces, I was braced for Forgeworld levels of assembly, that is to say sturm, drang, and much gnashing of teeth in pursuit of beauty. Imagine my surprise, then, when it turned out that these buildings require no assembly whatsoever. They come in two parts, building and roof.

The only ‘assembly’ I did was just the usual resin preparation, i.e. washing the components to get any releasing agents off the mould, and filling a couple of bubbles with green stuff.

You may also be wondering what the point of having a lift-off roof might be. That, milord, would be a fully sculpted interior. Ahhhh yeahhh.

Since these buildings will almost always get used for wargaming rather than roleplaying, I haven’t yet bothered to paint the interiors, but hopefully you can see the wood grain in the photo below. If you check out the photos on their site, there’s plenty of good photos showing the interior detail.

Build quality
The casting was extremely high quality, with only a couple of very small bubbles on each piece.

Since they’re big, one-piece castings, they’re also a lot more robust than a lot of resin kits, although I’d still be scared of treating them roughly – plastic scenery can take much more wear and tear in gaming club environments, but for home gaming I can’t see this being a problem.

It’s also worth mentioning that, from a layman’s perspective, Tabletop World’s casting techniques seem to break physics. How they can cast buckets, sacks et cetera onto the base and still be able to peel the moulds off the resin without breaking it I have no idea. This is probably less remarkable to someone in the know, but to me it’s delicious resiny witchcraft.

Ease of painting
There was one challenging aspect to painting these kits: the detail is so sharp, and so deep, that primer spray really struggled to get into the recesses. A lot of the time saved by not having to stick anything together was offset by spending a lot of time with some black paint, a brush, and 4,289,195 crevices.

Once everything was appropriately black, though, the painting was pretty quick; the well-defined textures make drybrushing easy.

Scale
The buildings are 28mm, but as we all know, scales can vary from company to company. For size comparison purposes, here’s a photo of a Games Workshop Empire Swordsman next to ‘em: 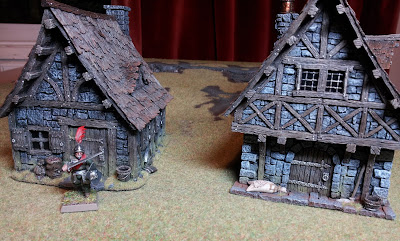 Bear in mind I’ve deliberately chosen a model standing upright (this guy’s a Greatsword kitbash). In the flesh, he looks to be more-or-less exactly as tall as the doors.

Pricing
It’s fair to say that Tabletop World aren’t selling cheap; at roughly £30 after VAT, the cottage costs almost twice as much as GW’s £18 chapel. Bear in mind that, since the product is coming from Croatia, you can also expect some meaty delivery charges and wait of about three weeks after you order, although TW have said on their Facebook page that they’re planning on getting distributors to make the shipping process more practical.

Obviously, I felt the price they were asking was fair, or I wouldn’t have bought the kits. The build quality is incredible, they’re extremely easy to use, and satisfying to paint. They’ve just brought out another kit – the Merchant’s Shop – and I will be buying the hell out of it as soon as I’ve scraped enough shiny pennies together.

If there’s anything I’ve not covered here, feel free to drop a question in the comments, and I’ll happily elaborate!

EDIT: You can now see the finished interiors in this post.