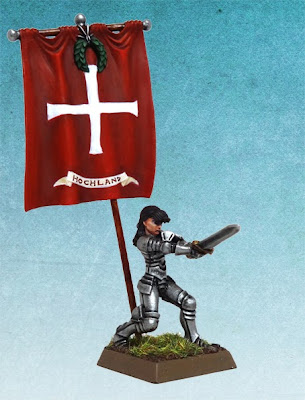 It’s amazing how many different meanings some words have in the English language, considering that we also have more actual words than most European languages. For instance, the standard standard of my standards is one of fairly elaborate designs (see here, here and here) but this time, I wanted to keep things simple. This is the flag of Hochland, not the quirky iconography of a specific regiment. 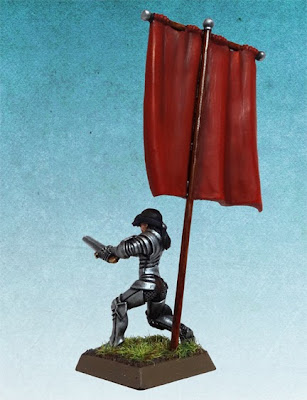 Also, it was only after I’d started painting that it occurred to me that Hochland literally has the Swiss flag, but whatever. Cheese, chocolate and mountains are all excellent things.

Now unlike most battle standard bearers, I wanted Captain Thiele here to be usable with or without the banner so that she could be used as either the army's general or its ensign. To that end, the banner simply slots into a very snug hole in the base, and can be replaced with a rock on a stick. Yes really:

Of course, losing something that small would be very easy, so it gets stored on the underside of Captain Thiele’s base:

The mini itself is Hasslefree’s Dynamic Tiriel. It was awesome to find a female model in full plate, although I confess I wish she was a little heavier in the waist department, and that her fringe wasn’t quite so long, but these are pretty much my only serious complaints (that said, I do have a minor quibble about the posing - whilst it looks cool, I’m fairly sure her twisted stance will rob her strike of structural core strength). 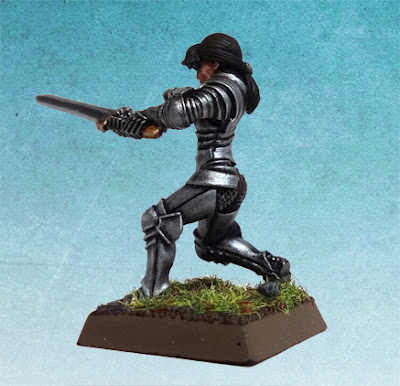 The hilt was quite chunky, so I tried to break it up visually with a random engraved squiggle: 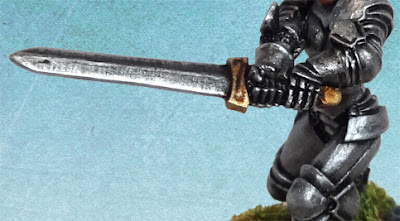 Getting at the face under all that fringe was a bit of a mission, but on the upside, said fringe’s length means I only had to paint one eye. Man, do I have a hard time painting eyes. It’s more fiddly than creative, although very satisfying if it goes well. If it goes well. 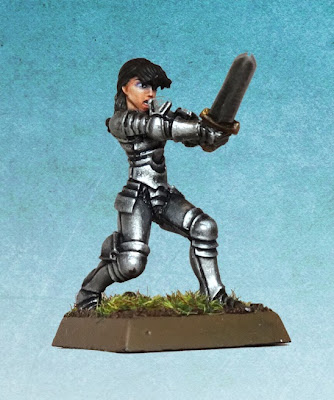 And now for the mandatory non-GW-model-scale-comparison. May I remind you that Amelia is freakishly tall, but Oskar’s about the height of your average Empire Greatsword. 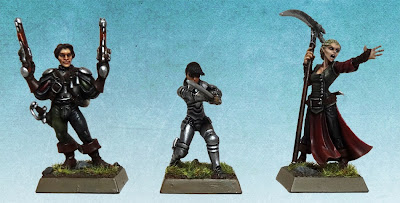 At this stage I’m not saying much about the character herself. Her name is Captain Cara Thiele (pronounced Teeler). She’s a skilled commander, but tends to be overly strict.

Imperial scouts watching the de Crécys’ lair at Hovelhof sent word that Phillippe was leading an army south in the direction of the war graves outside Krudenwald. As panic spread through the Bergsburg refugee camps, Grand Master Von Rüdiger led an army out of the city and met de Crécy on the road. Whilst the rest of the army engaged the undead host, Amelia sought out Phillippe, keen to finish what she started in Wahnsinningen.

Somewhat unsurprisingly, Phillippe had been harbouring a spectacular grudge against Amelia after his near-death. This time, he was prepared. The two of them ignored the punch-up unfolding around them and locked into a magical duel that lasted most of the battle. In the end, Amelia was unable to hold Phillippe’s aggression in check, and succumbed to a particularly vicious hex that left her in a coma.

De Crécy’s army was defeated, and he himself was sent off by a particularly accurate blast from a volley gun, but he didn’t care; he might’ve been denied the thousands of corpses outside Krudenwald, but he got his revenge, and his injuries from the volley gun were merely physical.

Amelia’s inert form was brought back to Bergsburg, but neither physicians nor Priests of Morr could rouse her from her catatonic state. One of Hochland’s greatest defences against the undead army was now out of the picture.