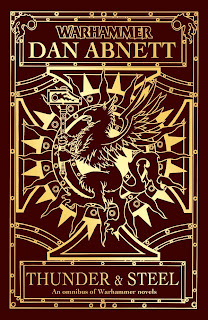 Since Thunder & Steel is an omnibus, this will technically be five or so mini-reviews. I could go meta, and review the omnibussyness of the omnibus, but all you need to know about it is that it’s a collection of Dan Abnett’s forays into Warhammer Fantasy.

The trouble with book reviews (along with film and theatre reviews) is that they’re inevitably tinted, if not full-on coloured, by the reviewer’s personal preferences. For instance, narrative and character is more important to me than stabby-death-kill, which is why I haven’t bothered reading all that much from the Black Library. They’re good at publishing what they do, which is a head-on collision between pulp fiction and the baroque kitschosity of Games Workshop’s storyworlds, but for the most part this leaves me bored by page fifty. There are some glorious exceptions to the rule, and most of those exceptions come from the mind of Dan Abnett, which was precisely why I picked up this book – I’d read the Eisenhorn and Ravenor trilogies, and had a lot of fun. With any luck, I’d find similar greatness in Thunder & Steel. 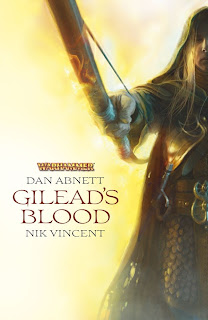 This is the first novel in the collection, and whilst it was well-written, I just couldn’t get excited about the concept of an Elf wandering around laying waste to things whilst channelling Morpheus, the King of Mope from Gaiman’s Sandman series. I understood why the character was mopey, I just couldn’t get excited about the direction the narrative was taking, and gave up after about fifty pages. Given that Abnett went on to write a bunch of books about this willowy bag of drip, I can only assume there was some juicy narrative goodness to be had... I just couldn’t be bothered to get there. At this point, I started to think Thunder & Steel just wasn’t going to be my cup of tea, no matter how much I’d enjoyed Abnett’s other work. 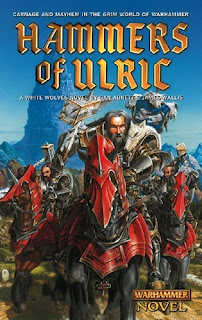 The second novel in the collection benefitted from much more relatable characters, and had some great set-pieces; Abnett and his two co-authors bring the city of Middenheim to life in all its frozen eccentricities, and kept me entertained enough to actually get through the book. Abnett’s Knights of the White Wolf are entertainingly boisterous, although there’s a lot of characters in the company, which makes the passages with the knights hard to follow at first. Vincent’s street urchin/thief character is engaging, as is Wallis’ Priest of Morr, who shuffles around being a detective when he’s only supposed to be on mortician duties.

Clearly, an improvement on Gilead’s Blood. But it’s not without its problems.

The book was originally a collection of short stories by Abnett, Nik Vincent and James Wallis, and it shows. The book simply doesn’t feel as tight as some of Abnett’s other work, and whilst overall it’s fun, I was at times pulled on by my inner Empire fanboy more than my interest in the novel itself. It was with lower expectations, then, that I trundled on to the third novel in the omnibus more out of habit than hunger.

Book Three: Riders of the Dead 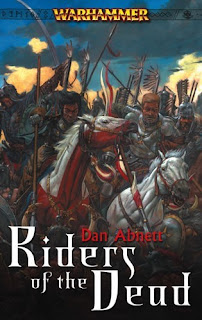 Gilead and Hammers are both older books than Riders of the Dead, and you can really tell. Riders was a) designed as a novel, and b) has more satisfying character arcs.

It’s set during the Storm of Chaos – the cataclysmic event that preceded the story of the Beard Bunker’s campaign – and keeps its focus on two Empire demilancers. There’s more stabby-death-kill than you can shake a stick at, but that wasn’t why I enjoyed it. We all know Abnett can do stabby-death-kill; what I wanted was to escape into the Warhammer World, and in this Abnett has excelled; he brings Chaos Warriors to life in a way that makes me simultaneously hate and respect them, and what’s more, he sets much (if not most) of the book in Kislev – Warhammer’s equivalent of Russia – which is a relatively unexplored area of the background material.

It’s very evident that he did a good deal of research before writing Riders. All the little details of life on the steppe have been thought through, from culture, to technology, to mythology. Having such a believable, grounded world makes the portrayal of the supernatural elements that much more intimidating, and whilst I read the book several months ago, I still have vivid images in my head – from the landscapes, to the cavalry charges, to... well, you get the idea.

One thing you should know, though: it’s bleak. So bleak. The two protagonists were engaging enough that I had to know what happened next, but at every turn, I suspected it was going to be upsetting. Karl’s story in particular; he’s taken prisoner by the northmen at the beginning of the book, and I kept on thinking “it can’t possibly get any wor—ohmygod really? Brutal, Abnett. Brutal.”

Interestingly, though, the novel wasn't depressing. Despite horrific circumstances, neither of the characters get too mopey (unhappy, certainly, but not mopey) and that’s what keeps the book moving towards a climax which I came to anticipate with a certain terrified inevitability.

Other readers have accused the novel of ending abruptly, and it’s easy to see why. It is abrupt. But as I sat there cogitating on it, the abruptness felt more and more right. If you read it, I hope you’ll see what I mean.

And finally... two short stories and The Warhammer

There are two short stories included in the omnibus, and the work well as a companion to Riders of the Dead. One, Swords of the Empire, is enjoyable but not memorably so, whilst Shyi-zar provides a welcome chance to see more of the culture of the northmen, and to spot a few characters from Riders. Abnett once again does that thing he does by breathing life into the otherwise monotone Games Workshop background material of CHAOS WARRIORS ARE ANGRY ANGRY MEN WHO STAB THINGS FOR GLORY AND SKULLS AND GLORY. SKULLS.

Finally, The Warhammer is a pretty straightforward graphic novel about how sometimes in the Warhammer World, picking up a magic weapon isn’t necessarily the best idea you’ve ever had. The art’s impressive, but it’s printed on paper that won’t support decent image quality, meaning that you can see what’s going on, but really aren’t getting the full visceral deliciousness of the original artwork.

To buy or not to buy?

The test of a Black Library book is this: would you recommend it to a friend who isn’t into Games Workshop stuff? I’ve leant Eisenhorn to non-GW friends and they’ve loved it. I’d do the same with Riders of the Dead; it’s compact, punchy and evocative.

If you’re a big Warhammer nerd, then Thunder & Steel is worth it. If you’re a more discerning reader, you’re better off just getting Riders of the Dead as an e-book on its own.