Last time I posted Jeff and I were sharing what we have done in the past and I briefly mentioned that I was looking at doing some Ogres. Why Ogres? Well, simply, I wanted something very different to my Vampires, and what can be more different to a horde of Zombies than a small band of huge, sweaty, violent Ogres. In true Beard Bunker style the first thing I set about doing was writing some back story. I wanted to set out the feel of the army before even thinking about getting the first models in. So without further ado, I give you the Readers Digest Condensed History of the Offlandz Protectorers!*

The Offlandz Protectorers were originally a nomadic tribe by the name of the Onefinger tribe, named after their digitally challenged leader, Nargutt. The Onefingers wandered into the Empire state of Ostland where they started making a nuisance of themselves, pillaging villagers, raping cattle etc. Baron Gustav von Wolder of Salkalten lacking the troops to fight off the ogres, needed a cunning way out. An advisor suggested that the put the ogres on the payroll and employ them as a standing force to deal with roving bands of marauders, beastmen and other ogres that had been plaguing the region. Baron von Wolder sent messengers to Nargutt Onefinger with an invite to open contract negotiations. Nargutt sensing an easy ride on the gravy train, agreed to meet. However, the negotiations didn’t go very far in Nargutt’s favour, mostly because of the careful wording from the Baron and his advisors, but partly down to Nargutt’ lack of digits prevented him counting higher than 6. This didn’t prevent an agreement being reached. The Onefingers would receive a annual payment in gold and a monthly tithe of foodstuffs from the town. With the contract signed and counter smeared by all parties, the Onefinger tribe setup camp outside the town.

As part of the deal the tribe received a stock of cloth in the state colours to make themselves uniforms to cement their allegiance to Salkalten and Ostland. Several years passed and the tribe grew fat and comfortable. The frequency of raids in the area kept them busy enough to slake their need to smash someone up but there was nothing taxing enough to make them look elsewhere and the supply of food and drink kept them lazy. These days of plenty where sadly numbered. The chaos invasion of the empire brought them to a close. Onefinger, bound by their contract to defend Salkanten had little choice but to dig in with the human garrison and weather the storm.

The little town avoided the main thrust of Archaon’s army and only faced outriders and small raiding parties. However the Onefingers held the town and the prevented huge amounts of damage that had been dealt to other towns and cities in the region. After the defeat of Archaon the scattering of his armies have kept the Onefingers busy. The Baron in gratitude declared them to be the Protectors of Ostland and promised a large bonus into their annual payment (he was unspecific to which one). The tribe took this new name to heart and started referring to themselves as the Offlandz Protectorers (most people ignoring the mis-pronunciation out of ‘politeness’).

So with that in mind I dived into the first unit. Being as I am I always hit up the core choices first. I can proudly present Yarg's Raging Bulls! 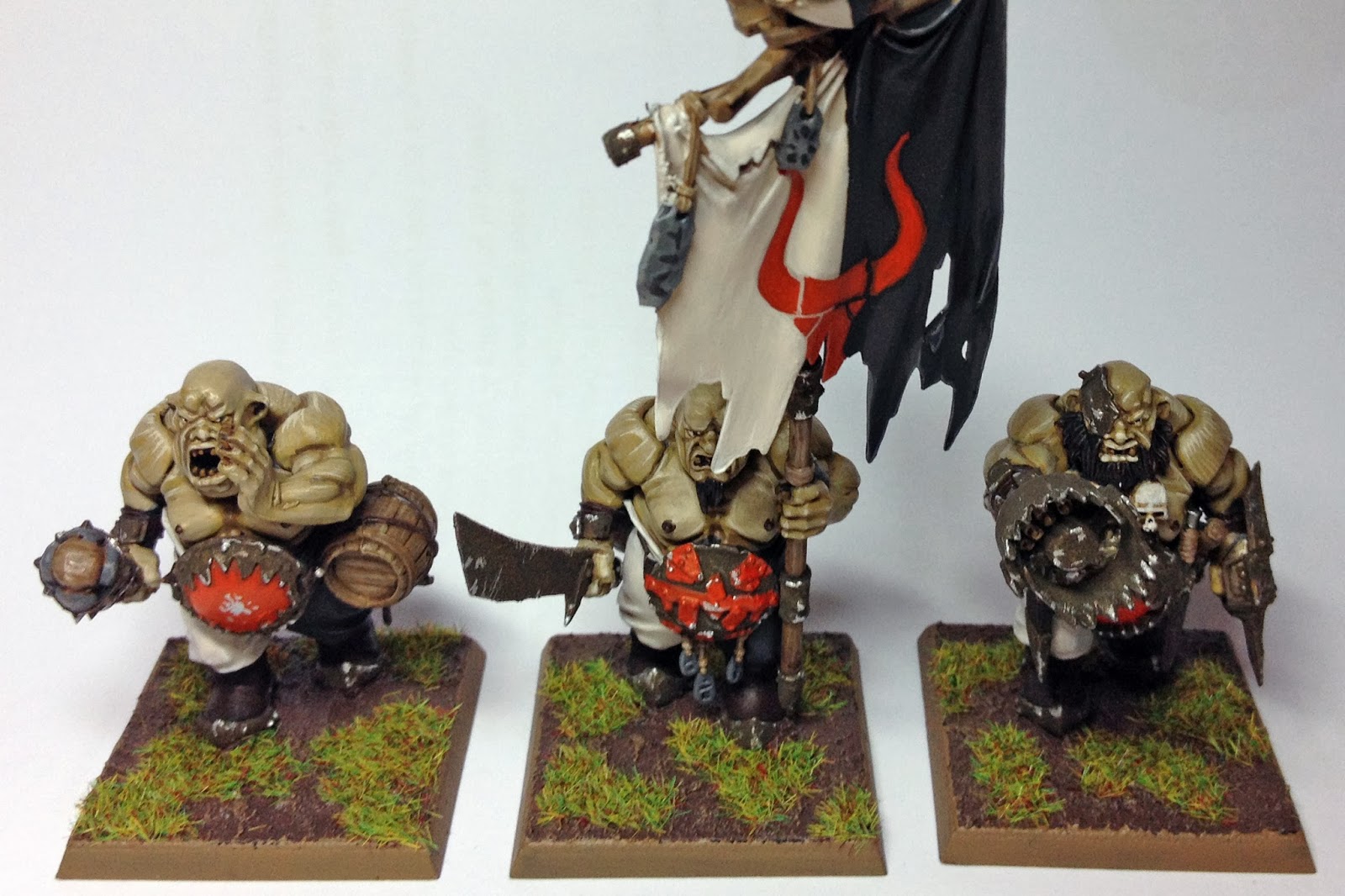 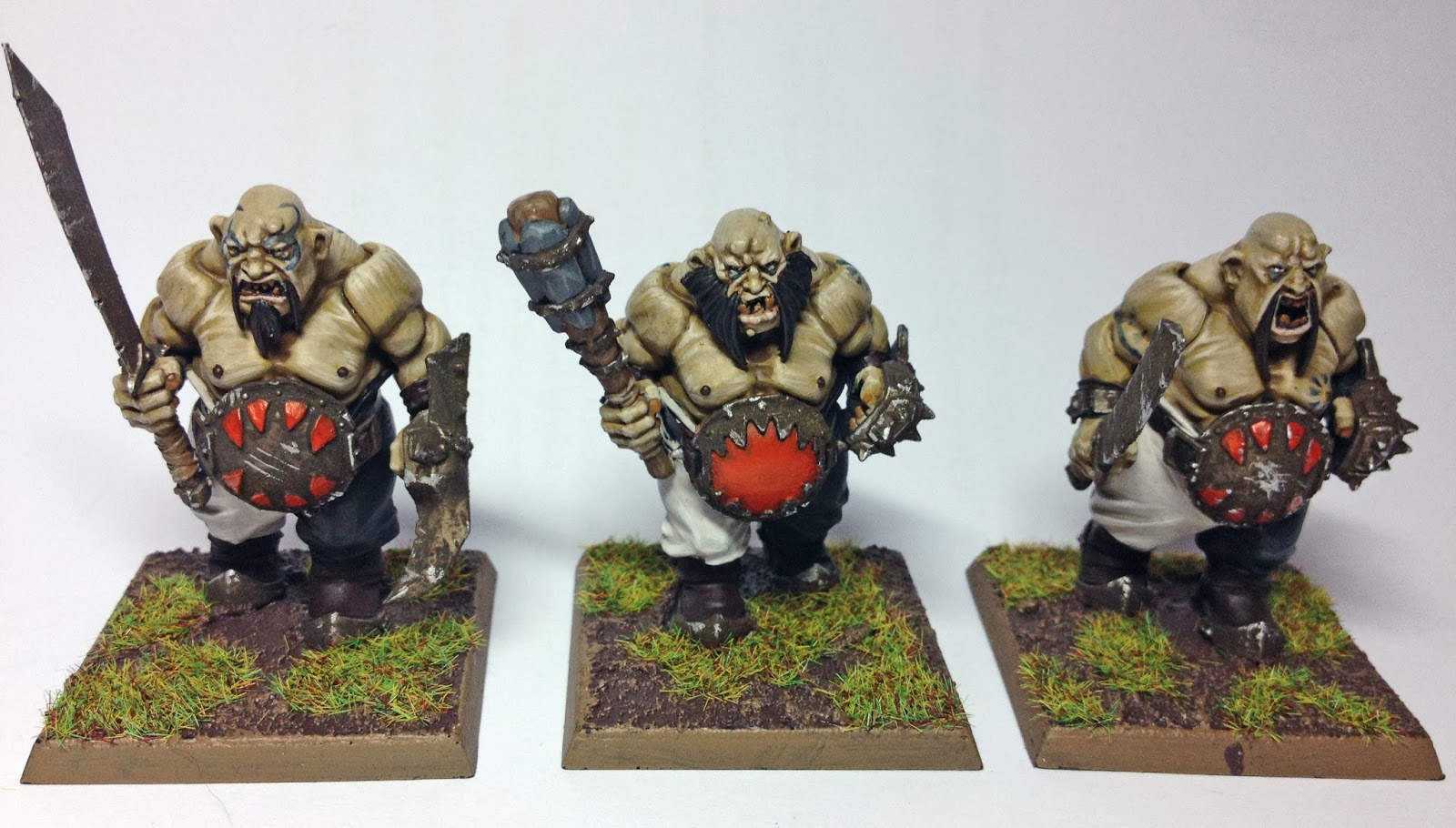 Yarg first rose to take over as the Crusher of the Bulls after he accidentally got involved in a Empire led mission to stop a necromancer from bringing back a potent Vampire. Yarg had gotten lost after chasing a Gor herd away from Salkalten. He was sitting down minding his own business when an Empire Captain approached him. Impressed by the shiny armour and very tall feathered helmet he (vaguely) remembered that he was under contract with the Empire and decided to be good and help out the Captain. He smashed a lot of green things. Then smashed a lot of dead things. The captain said that Yarg did good, which made him happy, even after he lost his favourite cow carcass, which had made him sad. 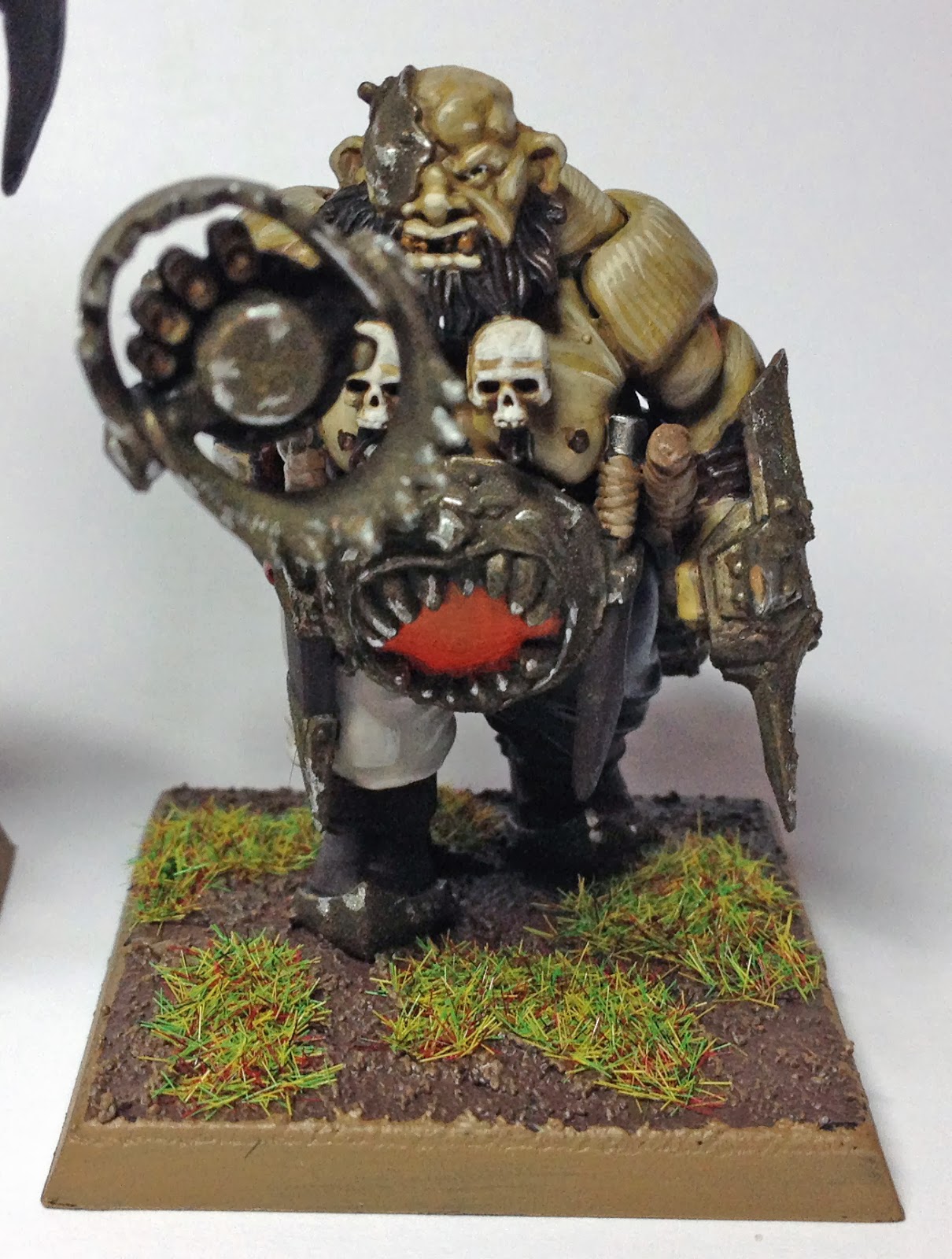 After the battle Yarg felt he should return to his tribe and set off in search of them. On his return he asserted his new found confidence as the Captains favourite and thumped his way to dominance amongst the bulls.

Next I'm planning on getting a unit of Leadbelchers painted up. Can't go wrong with a bit of self propelled artillery.

Until then, take it easy.