By Jeff February 01, 2014
Hi folks, it's Jeff. In order to celebrate the first new dwarf models in ooh-gosh-ages and because my stunty excitement-o-meter is dinging at the top of the scale, I've been painting... yep, Dwarfs! 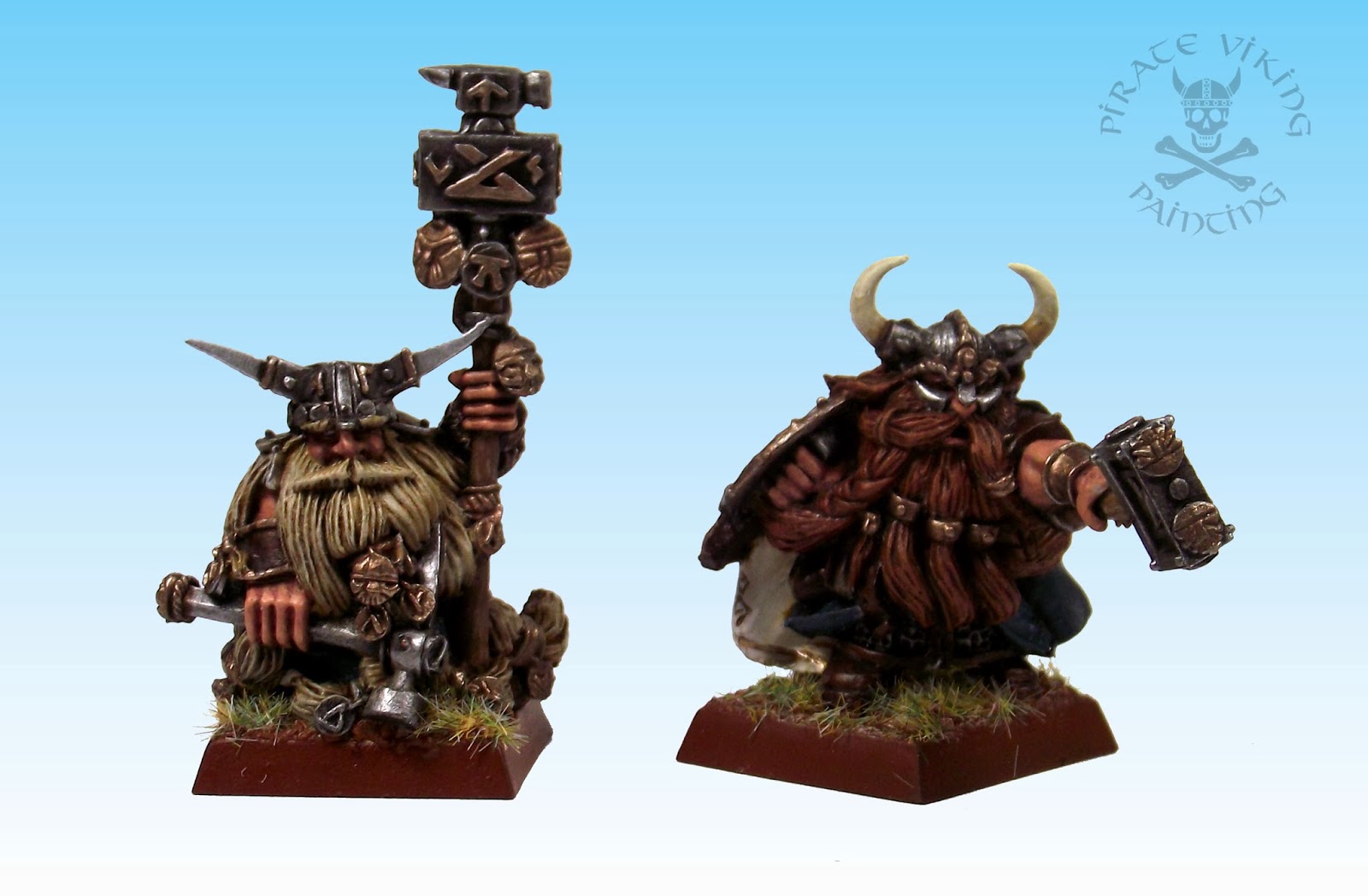 Recent events in the campaign have convinced me that I needed more heroes, especially a thane without a battle standard in hand to lead smaller armies. As I wanted to promote Dwalin to Runelord I also wanted a new Runesmith to take his place in the smaller actions. So here they are! I figured having two younger dwarfs - mere striplings, barely a century each - in the mix would make for some interesting roleplaying options too. A bit more devil-may-care optomism. So without further ado, lets meet them.

First up is Finbar Stormborne, Thane of Karak Hoch and son of Vindalf Stormborne (Hafnir's brother and army battle standard bearer). As the king's nephew he's been promoted as rapidly as decency allows and is now leading small expeditionary forces to prove himself worthy of his rank. I imagine he has to put up with rather a lot of "well, if you say so" from the older members of the hold.

The model for Finbar is one of those that always needed a 360 image to be impressive. From any one angle it kinda looks odd but when you can see the whole thing he's got a nice dynamic stride going. He's going THAT WAY and everyone needs to follow him. Like all one-piece castings (well, two, the hammer is separate) there are a few places where compromises have to be made but for the most part. A lovely figure. Painting wise, nothing much remarkable about either of these two. I'd made the conscious descision to make them as youthful as possible so no grey hair, pink skin. Otherwise, they're dwarfs! All beard and armour and cloak! 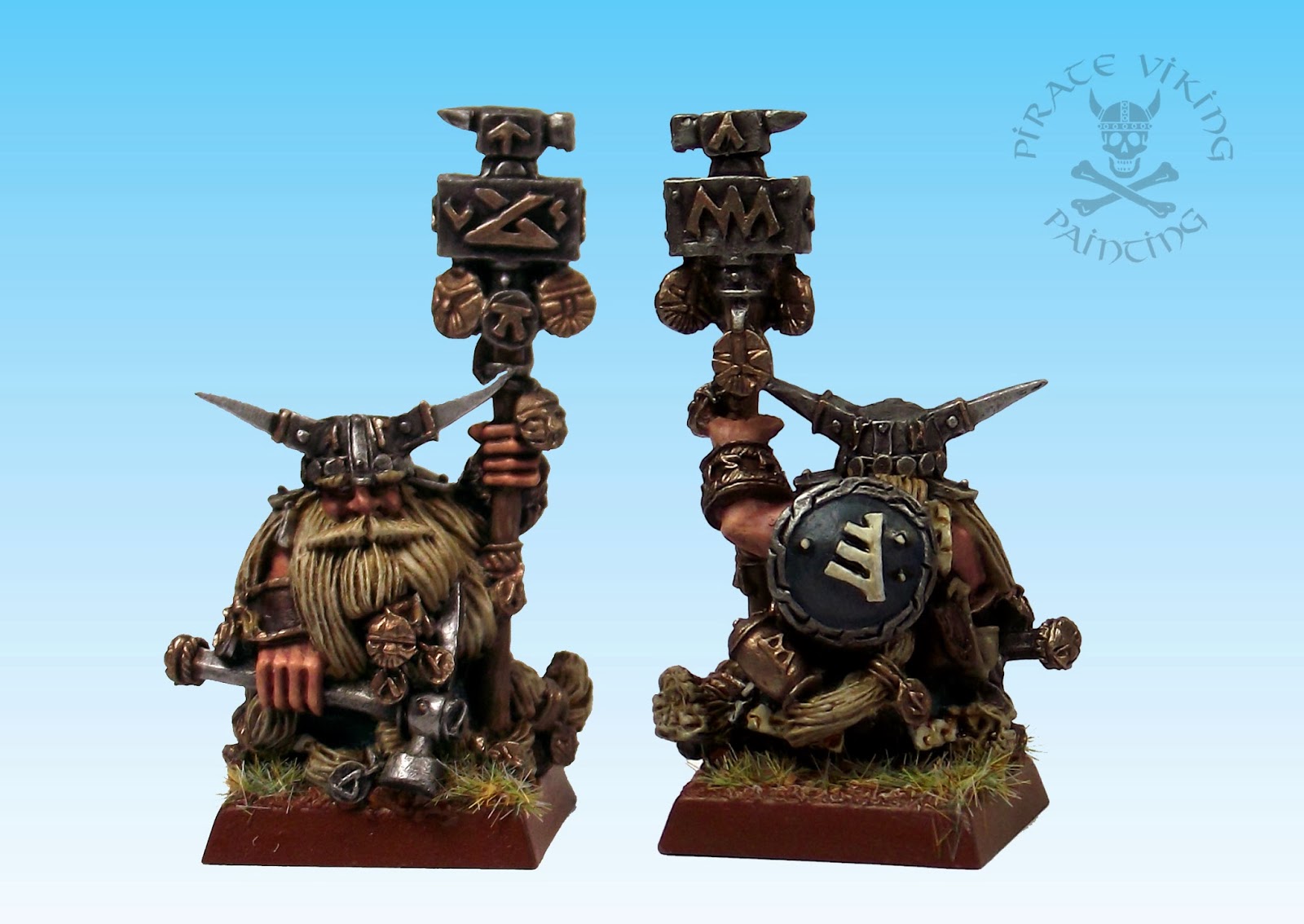 Berwyn Chamonbind is up next. In my "Jeff's Expanded Dwarf-fluff" Runesmiths take a new name on finishing their training, severing old family ties and serving the hold. Hence Gravenrune for Dwalin and in this case Chamonbind, Chamon being the magic wind of metal. I liked the idea of a runesmith wrestling this wind into weapons and armour and beating closed the runes that would allow it to escape. I think of this stuff, go with it. Berwyn was apprentice to Dwalin and has only just recieved his runestaff. It's why he looks so chuffed to be holding it. Berwyn will be taking on the day to day magical protection duties for Karak Hoch's armies while Dwalin focuses on studying the mysteries of the old hold and advising the king.

So, slightly big Dwarf-news finally confirmed today. WE GET NEW STUFF! [happy-stunty-dance] Owing to GW's new release schedule we won't be seeing the army book probably till the end of the month (boooo) but today we see some of the prettiest Dwarfs to leave HQ in many a year. I am already justifying the cost of replacing my current longbeards with the new ones. The plan is to send the current Ancient Mariner unit to Karak Timotai for a "youthening" - i.e. paint their beards anything but grey - and recast them as a regular warrior unit. The fancy models will be explained away by their being higher caste dwarf warriors. No difference in the rules. Just richer. Oh, and that new Slayer? He will be mine. That thing is gorgeous. I've already got a nifty Hasslefree sculpt as a hero level slayer, he's just going to have to be a lord I think...

I'm going to do an article when the book comes out about the process of reassessing an existing army in light of new rules and suchlike. It won't be one of those "waah, I've not played one game but I can already see that they've ruined everything" whinefests reviews that you see. Instead it'll be reassessing what the units I have will be used for now, recasting characters as all their wargear will have to be changed - but I'll be keeping the "feel" of each one - and plotting and scheming for the future. Until then