By Jeff February 16, 2014
Hi peeps! As with all things like this, an introduction is a good place to start. I am Lucy, otherwise known as Mrs PVP (Jeff's missus). I have been around the hobby for as long as I've known Jeff (a scary 17 years) and up until recently I've never really jumped in with both feet. I'd always enjoyed painting the odd figure more than the actual gaming. Having been around the Beard Bunker boys (and now girls!) for almost 7 years I've been gradually pulled into the gaming side of the hobby and it is time for First Army; So here come the Boyz! 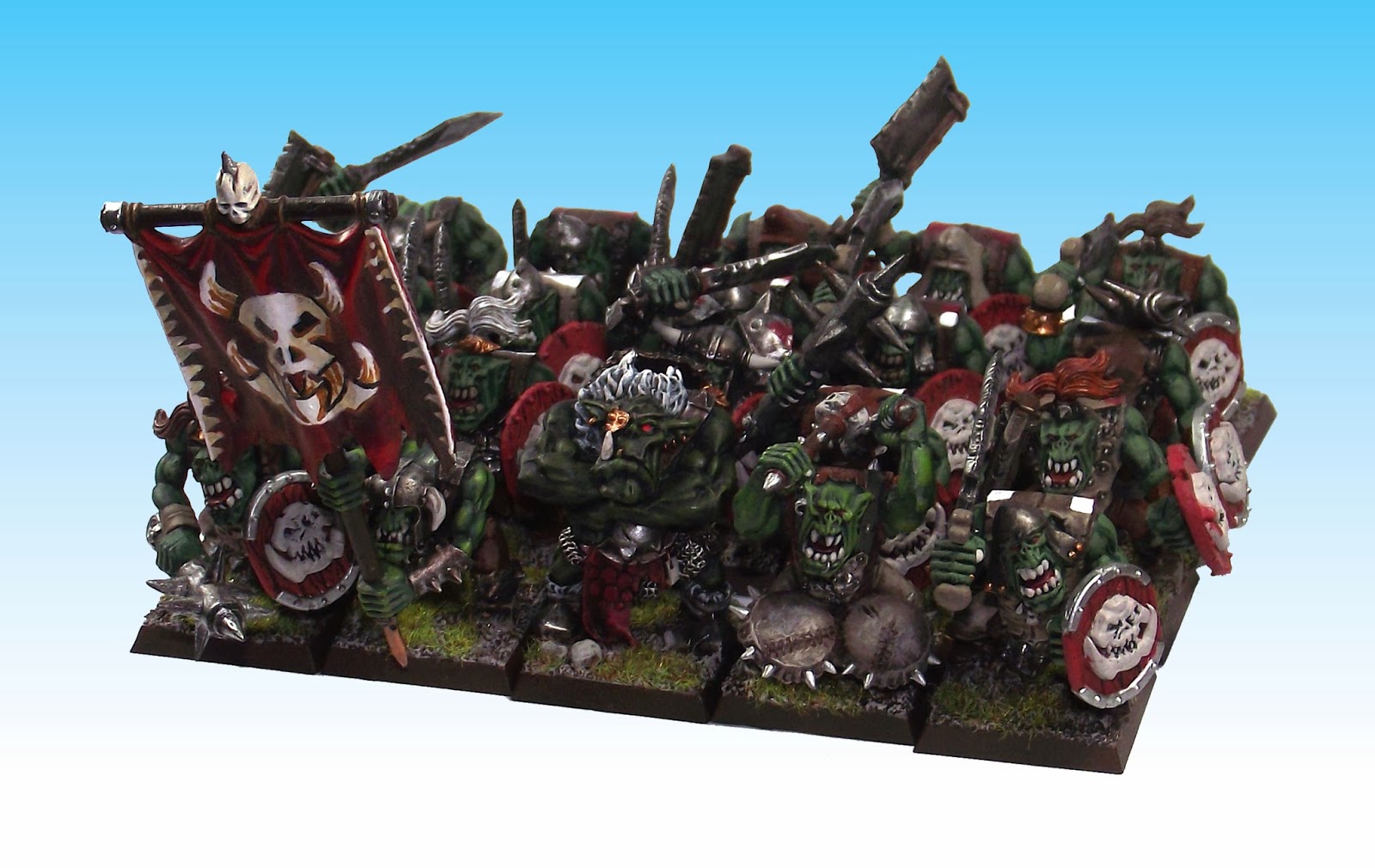 So, why Orcs? I don't know what exactly drew me to Orcs in the first place, maybe the squigs? Maybe the background? Or perhaps it was just the mad amount of fun and unpredictability that surround the Orc armies. You never know what your boyz are going to do from one turn to the next, an excellent excuse for defeat for a novice general... Plus, they tend to just look AWESOME en masse. 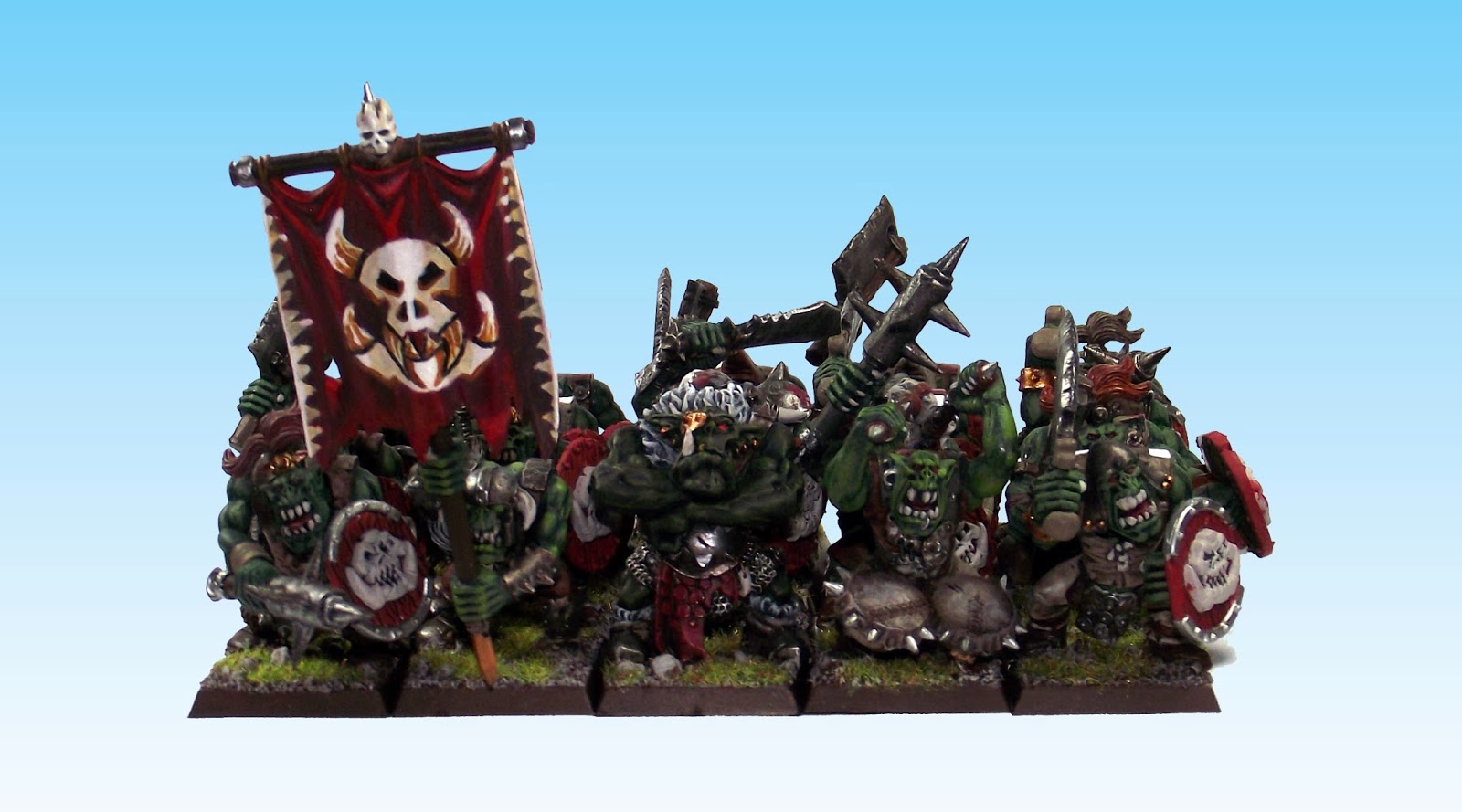 This was the first (and indeed only) unit I painted, some time ago, when I was first trying to build an army. I hadn't quite sparked my interest for playing at this point so the army didn't progress any further. I've no idea how I painted them or what colours I used I'm afraid as it was a while ago and it was the old paints anyway (some might have even been the paints before last!). I'm working on another unit now and I'll be able to tell people how I do it then! It'll be interesting to compare finished colours between oooold paints and the new ones. One of the things I can talk about is banners. I think I'd finished the units banner before any of the actual models! I love the imagery of the Orc Glyphs, I have an interest in tribal symbols and pictograms so the wonderfully colourful and basic patterns of the Orcs are great to paint. This banner was done freehand from a sketched design on paper first, I've got a background in illustration so this sort of thing is fun for me. Of course, you might have noticed a really surly bloke in the middle of the unit. Time to introduce: 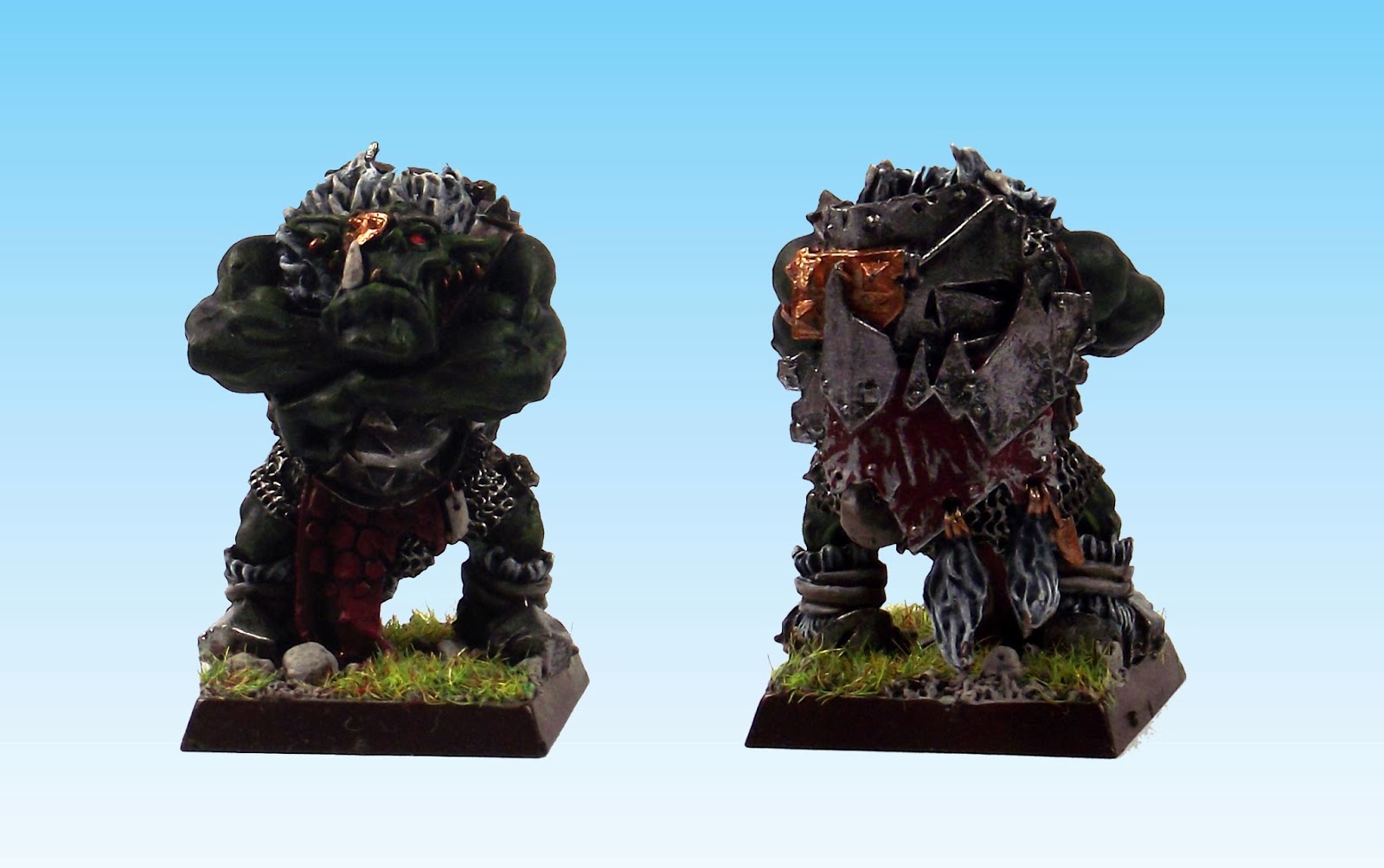 Zogfang Goldeneye! I have been in love with this model ever since I saw it on the Game Day promotional material, I had to have him! He's just all attitude, the pose, the look on his face, everything about him just oozes confidence with a lot of Badassery on top. He is the general of my army, a Black Orc with an astounding lucky streak. He took a handgun bullet to the face that tore out his right eye. The model has a scar extending under the eyepatch across the top of his head. To replace it he found the first eyeball shaped trinket he could find. This turned out to be the arcane focus of a Celestial wizard that he'd just finished killing. Since then, Zogfang has always been able to see that little bit into the future. We're counting it as the Gold Sigil Sword (Initiative 10) and giving him a lucky streak in his backstory. I'll write more about this story and his intentions another time. 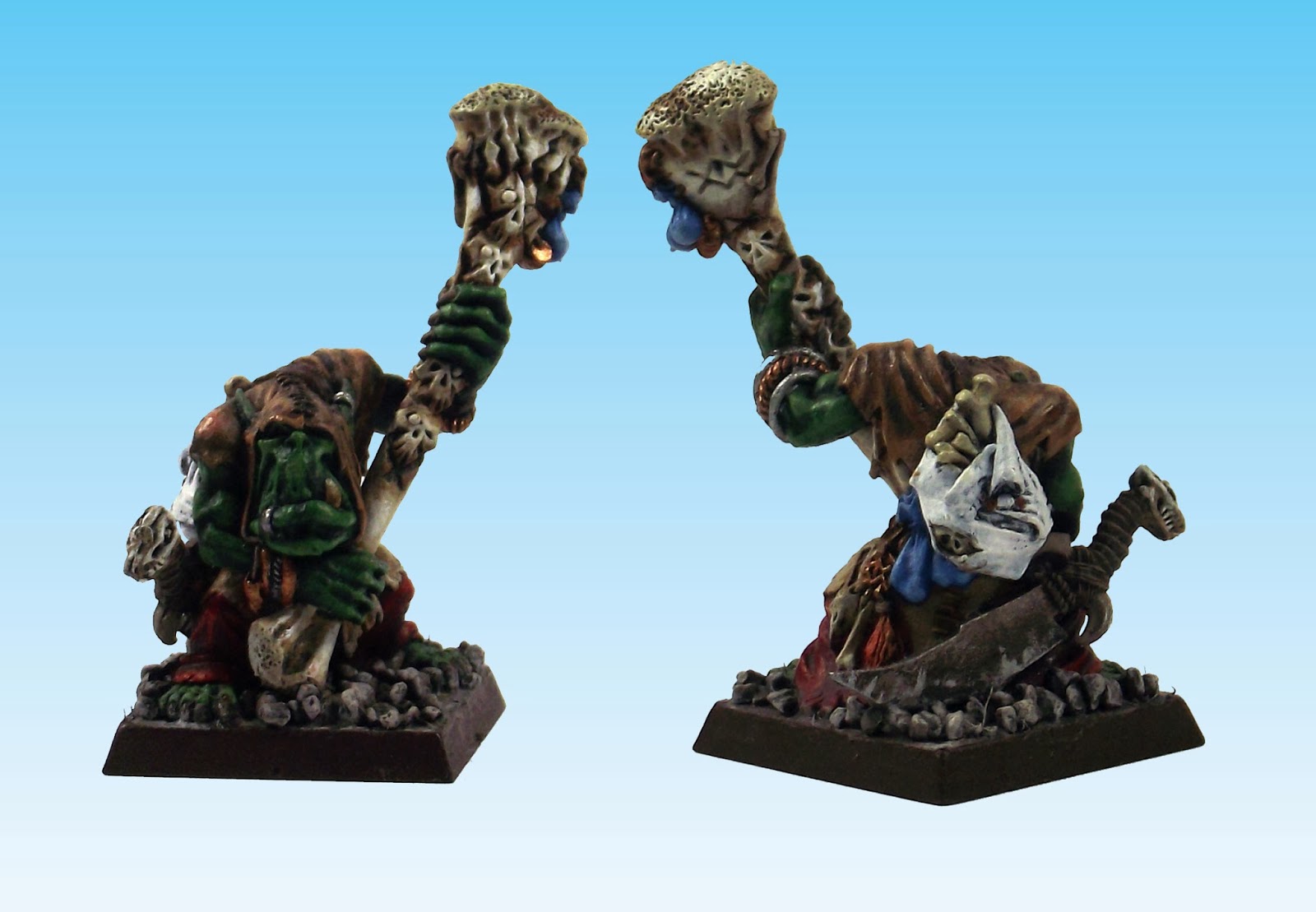 Zogfang isn't alone in his wanderings, he has his faithfull core of trusted Black Orcs (unpainted, more of those later!). Zogfang doesn't really trust anything paler than a Black Orc, only a very special few of the greenskinned Orcs make it into his inner circle. One of these is a tiny shambling shaman. Wurrlag Boneseeker. This is another one of the models that I really like and I loved painting him. The models that I have seen in other places have had him in very dark robes, I just don't think black suits him. Black would suggest he had access to good material, I saw him more in tattered, worn, leather robes and the occasional flash of colour that he could steal from battlefields. Also in other paint schemes, I have seen the bone staff as pure white with a small bit of tan colour for shading. Only bones that are left out in Death Valley and Arizona and places like that are pure, sun-bleached white. Bones that have been in the ground or in the air go pitted and dark brown (Jeffnote: Lucy trained as an Archaeological Illustrator and has handled many bones and bone objects. She assures me, she knows what she is talking about).

Wurrlag's main job is predicting the future for Zogfang, he seems to genuinely hear the voices of Gork and Mork and interprets their messages through the casting of bones. The Boneseeker comes from his tendency to acquire new bones from worthy, powerful or interesting foes. His staff is actually a giant's femur (we measured it against the kit!) and he blends the bones together as needed "ooh, need to know the weather, where's that shadow wizard rib I got...". Again, more on his story another time. I'll do an introduction to the army and what the hell it's doing in Hochland soon.

I'm still getting re-acquainted with unit painting (I'm a single figure painter at heart), I have a wyvern I really want to paint and mean ol' Jeff is using it as a carrot to get me to paint my first 1000 points of troops. He's put it on a really high shelf (Jeffnote: Lucy is really small...) so I had better get to it! I'll keep you updated with progress. Many thanks for reading.

Lucy is in a really weird position. She's very much a beginner in the hobby, but one with a decent amount of artistic talent and almost two decades of hobby lore rattling in her head courtesy of my obsessions. She's surrounded by players who've been at this a long time, who have ridiculous sized armies and who understand the terminology and rules as though born to them (she didn't get to see our own bewildered beginnings). As a result she can get properly frustrated at percieved lack of progress because she forgets what a frankly epic achievement painting your first 1k of warhammer army is. I'm trying to help her get over problems without drowning her in info she just doesn't need yet. It's a big thing for experianced players to figure how to help newer ones. We tend to want to vault over all that tedious (to us) baby steps and into the THIS IS COOL stuff. We can't, we've got to help and support so that overwhelmed quitting isn't the outcome. Here's hoping I succeed!