By Charlie June 26, 2017
After months of preparation, the new Battlefleet Gothic campaign is underway! Andy and Jon have begun their exploration of the Scyrian Expanse, an uncharted sub-sector at the edge of the Achernar Sector (that's the sector we Bunker dwellers made up as a backdrop for most of our games/stories, like the Daniverse or the Calixis Sector... feel free to suggest an appropriately irreverent name in the comments section).

As with other recent campaigns, we're keeping track of everything using a wiki. As they explore strange new worlds and stranger civilisations, or boldly go where no rogue trader has gone before, new entries will appear on the sub-sector wiki page.

Below is a star chart of the Expanse. Most sub-sectors only have ten(ish) useful star systems in them, so you can infer from this map that space is big, and it's up to the players to find the good stuff. 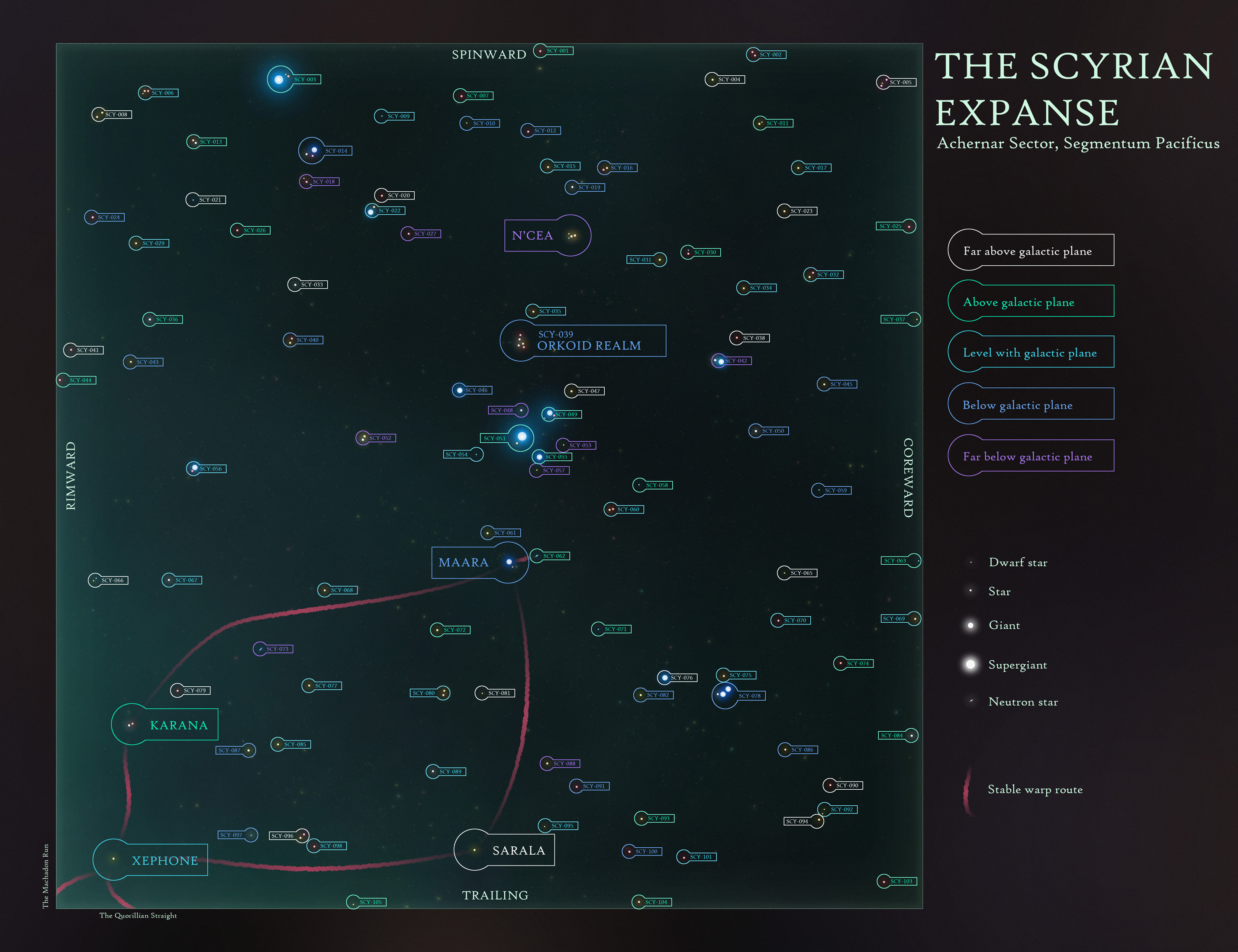 Jon is playing Captain Laius Ortano, the commodore of the Imperial Navy flotilla. Andy is playing Hassiq Betancourt-Xing, a rogue trader with his very own capital ship. Given the concept of the campaign, Jon thought it'd be criminal not to keep a captain's log, and such a glorious endeavour ought to be shared.  Here, then, I present what I hope is the first of several guest-posts from Jon...

EXTRACTS FROM THE JOURNAL OF LAIUS ORTANO

Today, I am in a solemn mood. It has been three months since we defeated the xenos threat on Xephone Prime, and not a single day goes by when I don't think of the men and women who sacrificed their lives in pursuit of our victory.

The few remaining tribal bands continue to be exterminated. And although they are but a mere nuisance now, squabbling more amongst themselves rather than posing any real threat to our continued efforts of restabilising the region, the Orks continue to pull our resources, our surveillance, ammunition, and continue to cost us lives. Each day, another group of Orks are found roaming the Badlands. Could it be that every world visited by these uncivil creatures become infested like this, seemingly without remedy?

The notion terrifies me.

A message from Admiral Tryphosa arrived today. She continues to congratulate me on our victory. I must admit, I am surprised we held out, outnumbered ten to one. But even still, the loss of the Reprimand continues to plague my mind. If only I had not have ordered them to chase down the remaining Orc ships, they would not have been caught in that infernal fusion blast that signalled the very victory for which I am now praised!

I realise that, over the past few weeks, I've already described these feelings at length, more than perhaps is healthy, but I mention this incident once again because it pains me still, and because Squadron 17 has at last received its replacement: the Amphion.

We passed it in orbit a few hours ago. It looks like a fine frigate. A reserve from Squadron 40, Captained by Commander Zhi Cheung, but an inexperienced crew. This would not concern me had Tryphosa's message not said the following:

You are to take an expedition into the Scyrian Expanse, in order to locate the origin of this Ork threat, and elsewise scout the area for additional threats, resources and habitable worlds.

She has also assigned a capital class rogue trader to the mission, a few days inbound from the BXK Mercantile Company: the Zenith, captained by one Hassiq Betancourt-Xing, a well-travelled and experienced merchant. He will accompany us to assist in destroying any threats we encounter, and provide expertise should we encounter any alien civilisations.

I do not feel ready to leave Xephone, but I must admit, the crew have become restless these past few weeks, just as I have languished in remembrance of the Reproach. And I must admit, the mystery of what lies out there in the Scyrian Expanse is thrilling, if somewhat terrifying. Perhaps Admiral Tryphosa's timing is well rehearsed?

Ferrer broke my quarter's comms pad today. The man is a brilliant assistant, but dash if he doesn't express a mote of emotion or surprise at anything.

I met with Hassiq Betancourt-Xing and his crew. They came aboard for dinner, and I invited the senior members of the Intemperance and the captains of all six vessels that make up our escort squadron for the trip into the Scyrian Expanse.

My first impression of Hassiq was rather positive. He has a grandiosity that reminds me of my grandfather; a model statesman. He even exhibits the same boisterous, drunken enthusiasm.

But then there were his crew members:

Antono Karolo, the second mate, spent the entire evening attempting to talk his way into my flight officer's under-garments! At one point I almost imposed myself, I couldn't tell if Sarala was uncomfortable or enjoying the attention. Regardless, it was not proper conduct.

Then there was the logistics manager, Sifira Joyner. She had kindly brought a data slate with details of the Zenith's operational performance. I thanked her and said we would take it and look on it in the morning, but she proceeded to bore Westcliffe half-to-death with it! I'm thankful he is a hardy Captain.

I suppose the crew of the Intemperance has its own eccentricities. To be fair, when I was transferred here after that horrific debacle in the Gothic sector, I thought similar things about this crew. As it turns out, the war in Xephone proved I couldn't have asked for better.

One more thing crossed my mind tonight while we were sat at the dining table:

Hassiq and Commander Priscus were sat either side of me. I asked Hassiq how he came to captain the Zenith. Priscus was utterly enthralled at the story. It wasn't long before Hassiq seemed to be speaking over me.

I leant back to let them speak, listening as I watched Antono's advances on Sarala and Westcliffe's boredom.

Hassiq told us how he had been held back by his parents. How he had fought for the opportunities that would lead him to captain the Zenith.

Now Priscus, he comes from a mercantile background. He no doubt fought hard for his opportunities too. I began to wonder if the dull, often blunt demeanour of Priscus was not a character flaw, but a personal distaste for me, a man who had briskly thanked him for his role as acting captain before pushing him off his seat to command this ship where he now serves as a subordinate to me, a man from a well-bred background, a man who was given his position on a platter and, truth be told, never wanted it.

Yet here I am.

Priscus just called me. It appears that the data slate Sifira gave us mentions a whole host of inoperable weapons and machinery on the Zenith.

I can't quite believe it. We are supposed to leave tomorrow on a trip into the unknown, with no means to repair or re-stock, totally alone – into a vast and uncharted sector of space, and they don't even have long range scanners working!

How did Admiral Tryphosa come to choose this ship? Surely she must have asked for a logistics and operational report before appointing them to the expedition?

A quick call with Captain Hassiq has left me uncomfortable and full of doubt. He was reluctant to accept our help, possibly due to an embarrassment. I understand his desire to be on this expedition may have pushed him to be lax on the details, but to be honest I feel it has been utterly irresponsible. We are risking the lives of ten thousand in this mission!

I have sent a message to Admiral Tryphosa, but with four weeks before response we cannot delay tomorrow's departure.

I have also asked for a crew to investigate the workings of the Zenith and for materials to be brought up from the surface of Xephone Prime so that we might craft the components needed to mend the dysfunctional combat and surveillance equipment.

Even still, we won't have what we need and it might take months before we even start repairs. We don't have time for this.

How I wish for the dulcet tones of Captain "Pragmatist" Dorschel to accompany me into this Scyrian Chasm, but someone needs to guard Xephone.

Between the inexperienced crew of the Amphion and the inoperable Zenith, I am beginning to have serious concerns about this expedition.