By Charlie June 12, 2017
There are some skills that can never be perfected, only improved. Among these is the skill of running a narrative game. I’ve been at it for decades now, probably since before I could spell the word narrative (nailed it last Tuesday) and certainly before I learned ‘denouement’ (which I learned by googling it just now; totally thought I could spell it, but auto-correct showed me otherwise).

To cut the Ballistic Skill: I make no claim to being a master. With that out of the way…

Last October I finished a long-running Battlefleet Gothic campaign, and two Beard Bunker readers (MajorTheRed and Malcus the Defiler) asked to know more about how I prepared it. Hopefully by answering that question, this post will prove useful reading for budding GMs curious about running their own narrative campaigns, as opposed to the matched play that so often dominates wargaming.

Thing number one: what’s the conflict?
All stories need conflict. Even in a story like The Martian – which doesn’t even have an antagonist – Matt Damon’s character is in conflict with his environment. By conflict I'm not referring specifically to violence, but that the protagonist wants something and finds hurdles in the way. The story ends when the protagonist’s goal is either achieved or denied with enough finality to provide closure.

The main conflict in the BFG campaign was pretty basic: an Imperial colony was under attack by a large ork fleet, and Jon and Maisey’s characters would encounter said fleet with only a reconnaissance flotilla and no chance of reinforcements. Whatever happened next was up to the two of them.

For added spice, I added a second conflict. Increasingly I’m coming to the conclusion that an essential ingredient in a good narrative is a conflict that can’t (or at least shouldn’t) be resolved with violence. Armed conflict against orks offers no moral or social complexity, but it does offer strategic challenge. For the social complexity, I decided that Commander Gereon Priscus, the executive officer on Jon’s ship, was an embittered man who felt he should be captain instead. He would therefore seek to undermine Jon’s authority without technically breaking any rules. Jon would have to win him over, or limit the spread of his influence by keeping the rest of his senior officers on-side.

Since one can never predict what players will do, I don’t bother to plan what happens next. I simply set up a conflict, and let the players resolve it. Protagonists are meant to shape the story, and they can’t do that if I’ve already written it!

What is the pace?
Once you know what the conflict is, you need to have a think about how long the story should last. The length is, you guessed it, directly proportionate to the complexity/size of the conflict.

Anticipating story length can be difficult, particularly given that everything seems to take twice as long as it should (that might just be me, to be fair) but expectation needs to line up somewhat with reality. If your players are expecting an epic and you give them a short story, it feels underwhelming. If they're expecting something quick and punchy, they'll run out of steam with a meandering odyssey.

Either way, deciding length at the start forces you to decide when to hurry the players up and when to give them space. Should it be a single evening? Six evenings? Maybe one full day would be sufficient, or maybe it'll take twenty sessions. Whatever it is, the players should know before they even agree to participate.

With the Xephone campaign, I knew it would be a relatively slow story. There was an extensive cast of NPCs to meet and form relationships with, and a challenging objective that would take time to complete, so we agreed to play weekly sessions, with the expectation that it would take months to complete.

What do the players enjoy?
Obviously it's essential for a GM to write something they're excited to run, and it's just as important to be mindful of the players' preferences. If those don't line up, then don't invite everyone, or write something else. I knew that Alex (my other half) would love all the interplay between the landed-gentry-in-space that made up the fleet's senior staff, but she would also have been bored to tears by the space battles. Conversely Jon would be all over it like sexy lycra on Super Manatee, and Maisey always did love an opportunity to stare forlornly at impossible odds.

What is the tone?
Is it campy? Gritty? Derpy? Moooody? With the Xephone campaign I aimed for somewhere between Jane Austen and Terry Pratchett, with sarcy space butlers and toff-tastic naval officers enjoying five-course dinners while a string quartet scraped out Dvořák's finest offerings.

Create the world
Now you know what you're aiming for, the work begins. This is where I tend to get over-excited. Since 40K is a well-established setting, much of the work was already done for me, but there was still plenty to do. Firstly, since the whole story would be set in one star system, it seemed appropriate to have a map of said system.

Next, I knew it would be useful to know where stuff was on the planet's surface, and what Xephone Prime was like. To that end, I sat down and thought through both the climate and the culture, then I added all that information to the Beard Bunker's setting wiki, since it was all information that would have been freely available in the Imperial archives. I have to say, using a wiki to keep track of story world information has made it much, much easier for a group of people to collaborate on a setting. Wiki wiki wa-wa win. 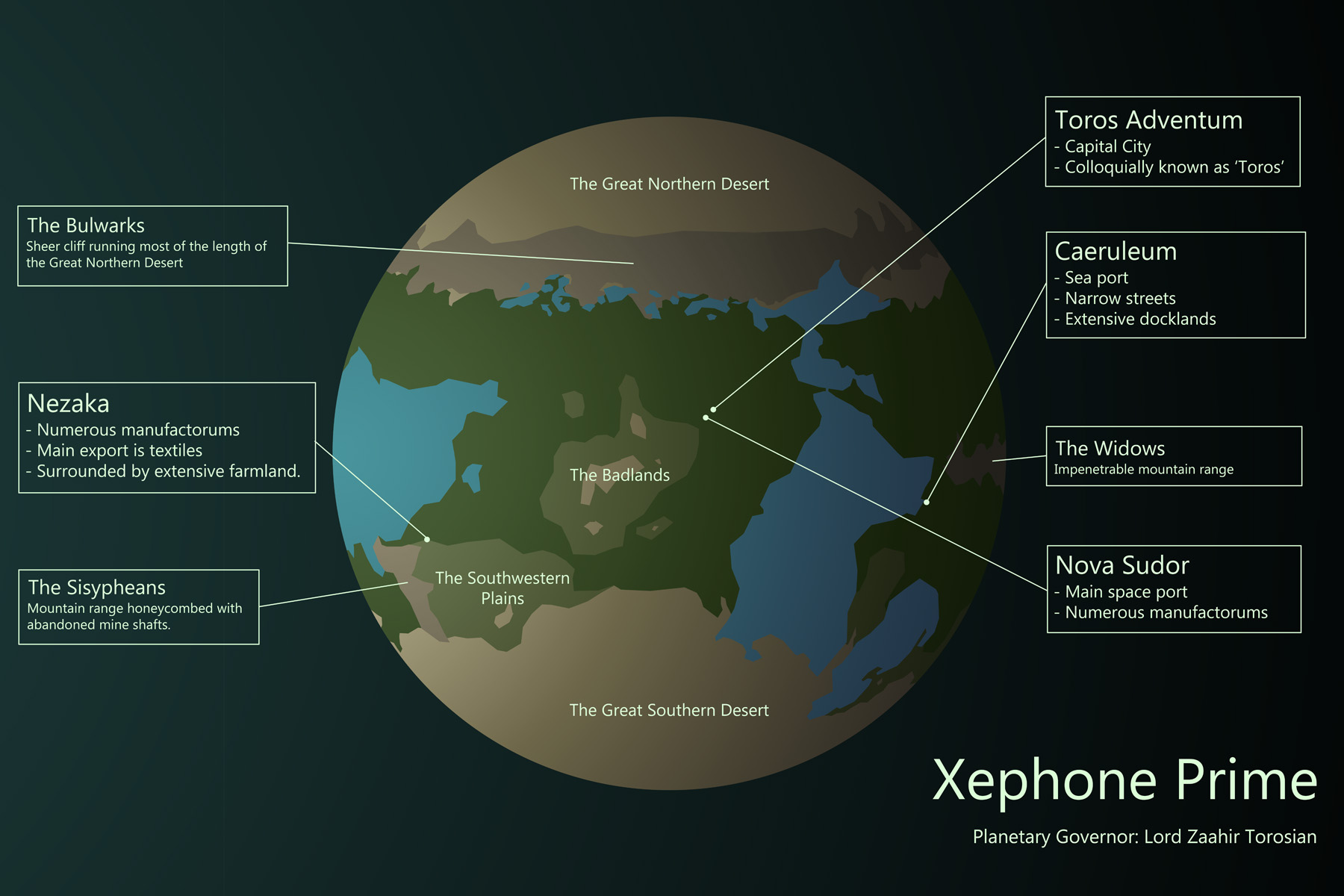 Similarly, I thought through how the orks had attacked and how the invasion had gone thus far so that I could be consistent in what I told the players. This was also a stage where I had to come up with a lot of place names, because coming up with a place name on the fly is almost physically painful.

Prepare the NPCs
With the setting sorted, I began figuring out the NPCs. The Xephone campaign had an unusually big cast, because I felt it important to nail the sci-fi trope of getting to know the bridge crew. The added challenge was that we didn't just need the bridge crew of Jon's ship, we needed them for Maisey's ship, and we needed the captains of the flotilla's escort ships, and for any of these people to have a name, they also needed to have at least some semblance of distinctiveness.

I also wanted to flesh out life on board these giant flying towns, so went into... enthusiastic detail about the capital ships' innards.


TL;DR: plan your world in excitable detail, but don't plan your story.

Okay now I've rambled on for longer than I'd like, so I shall sign off with a promise to, at some point, tell the tale of the campaign. With the new BFG campaign having started last week, there may also be some narrative treats in stall for y'all via Jon, but I make no promises on his behalf.

If there are things you feel I should have covered but didn't, do let me know! There might also be things you feel I've not covered in enough detail, despite the meaty length of this post. I'm happy to elaborate on demand.