Basecoats: brush, airbrush or spray can? 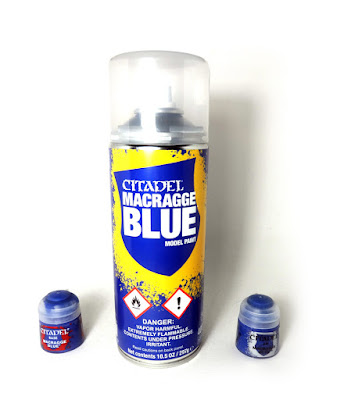 I’m about to embark upon a detachment of Ultrasmurfs, or at least Ultrasmurf successors, and the first logistical question was this: should I do the Macragge Blue basecoat with a brush, an airbrush, or a spray can? There are arguments for all three options, and as with all hobby quandaries, everyone must answer the question for themselves. Here’s my breakdown of the options, but let me know in the comments if you think I’m talking right out of my proverbial:

With a brush
A very large brush loaded with watered down paint will cover a model inside of about 30 seconds, but will need three or more coats for an even finish, depending on the colour. Your palette technique and brush loading also has to be on point (since it would be easy to overload the mini with paint) so this technique isn’t great for beginners.

With an airbrush
In my ignorance I thought this might save me time over a brush, but after talking to several airbrushing friends and after actually airbrushing a test mini, it turns out that actually what you’re getting is maximal quality but also maximal faff. Someone very practised in the use of their airbrush would undoubtedly reduce this faff time significantly, since they’ll be quick and efficient at getting the right paint consistency and so on, but this technique took longer than the other options by a wide margin. Two coats of Macragge Blue were still significantly darker over a black primer than the spray can, to the extent that it looked like Kantor Blue. That said, the texture was silky smooth, and after some more coats this would clearly produce the best finish.

With a spray can
So here you’re getting a strong colour over a black primer in almost no time whatsoever. The downside? You’ll get way more texture on the model, resulting in a vibrant but sub-optimal finish. I am an extremely lazy man, however, and am willing to skip my least favourite stage (basecoating) if it means a mildly less pleasing result. Your mileage on the texture thing may vary; see below for the results on a finished miniature.

Other considerations
There are other metrics to consider. First is expense. Spray cans are definitely the most expensive option unless you don’t already own an airbrush, in which case it’ll take a long time for that investment to pay itself back vs. individual spray cans. Secondly is the environmental impact, in which case spray cans are unarguably the worst, and the least efficient. At least where I live we can recycle aerosol cans? Still, not ideal.

Spray can test model: the results
As usual, laziness won out in the end. I decided to just use the damn spray can for my new primaris astartes detachment. They’re going to be Ultramarines successors (so that I can write my own background and characters) but for the test model I decided to paint an actual Ultramarines sergeant who’s been assigned to the successor chapter as an advisor, since they’re all new and innocent about the ways of the 41st Millennium. Here he is: 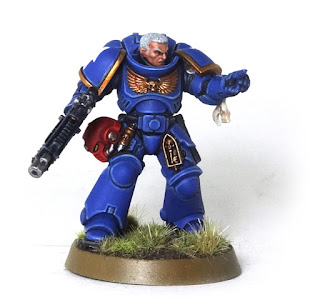 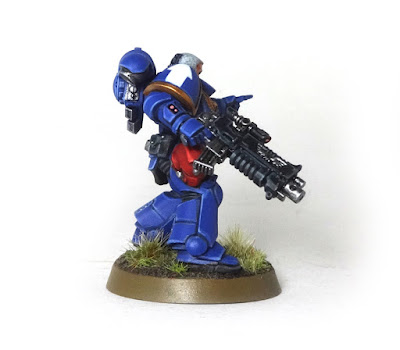 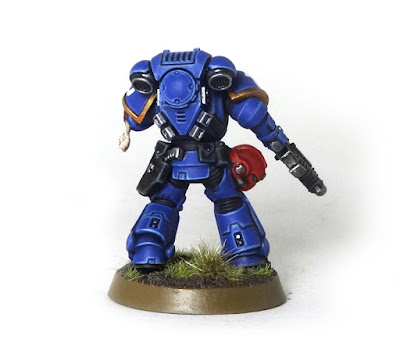 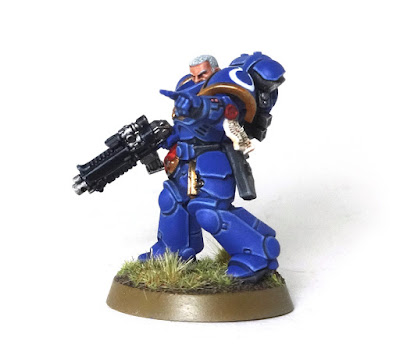 That blue is the blue spray can over a chaos black primer, followed by a single thin coat of Macragge Blue to help get a satin finish in line with the other surfaces on the mini. The highlights and shading were applied with the standard Ultramarines colours (basecoat Macragge Blue, line-in shade of Nuln Oil, highlight Calgar Blue, edge highlight with Fenrisian Grey).

It’s not my best paint job ever, but it’s certainly not my worst either. For comedy value, I feel it’s important to compare this guy to one of the first space marines I ever painted. 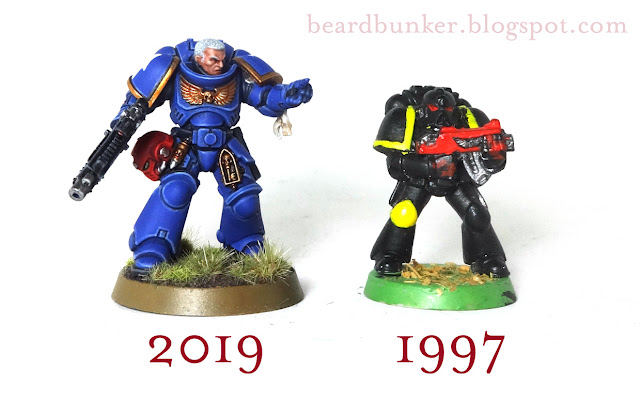 It seems fair to suggest that my painting ability and Games Workshop’s miniatures have both improved somewhat since the 90s.