If you go down to the woods today...

By Maisey June 17, 2019
... you're in for a big surprise. Maisey has actually painted something gaming related.

I'm not sure if that's how the song goes, but that's the relevant version. I have been off the radar a bit lately. Partly I've been distracted by the scale modelling thing, which I've mostly kept it off the blog unless it's something special or relevant. I've also been distracted by Life (TM), turns out buying a house is not conducive to a steady hobby output. Anyway, Em and I are safely in to our new home and I've finally unpacked enough of the hobby stuff to be able to sit down and paint something. 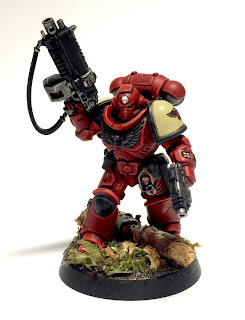 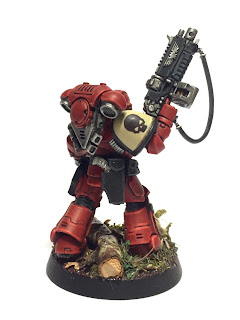 Back in December I painted a Blood Ravens kill team. I've now finished painting the rest of the box of Intercessor Marines, as well as a slightly converted Lieutenant model. I've not sat down and thought about naming these guys yet, although I've been referring to the LT as Lieutenant Dan during the painting process. Not very grimdark that name. I'll think of something better, unless anyone has any suggestions? 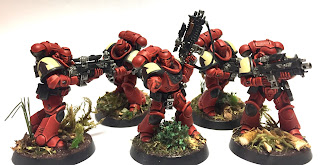 The conversion, if you can call it that was a very simple one. Take one Lieutenant from the Dark Imperium. Throw away the head. Replace with one of the heads from the Intercessor box. Cut away the helmet from his hip. Add modelling putty. Hide mess made with the modelling putty by adding a second bolt pistol holder and calling it part of his 'character'. 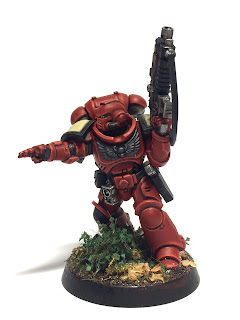 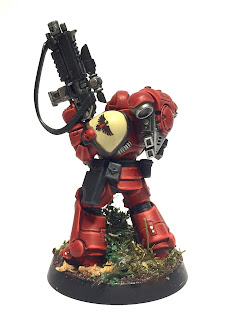 I've not changed anything from the previous post in terms of painting and basing. I could just link back to the previous blog, but I'll save you the wear and tear on that old mouse button and just copy and paste it here. 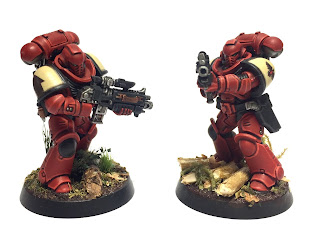 Quoth the Raven "The main red armour is Mephiston Red, Nuln oil recess shade, Evil Sunz Scarlet, and Wild Rider Red. No fancy blending, just trying to keep it smooth and neat. The black was Abbadon Black and Eshin Grey. Metal was Leadbeltcher, Nuln Oil, and Ironbreaker. Bone is Ushabi Bone, Agrax Earthshade, and Screaming Skull. That was pretty much it. The squad and chapter markings are decals from Chapter Customizer. These where applied using the same method I use on scale models. A layer of gloss, Micro-set, the decal, Micro Sol, another layer of gloss, then a layer of matte varnish. All with lots of drying time in between each stage." 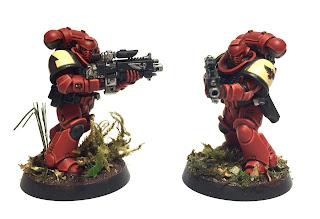 Then the bird said "The basing is where I made a higher than normal amount of effort, by my normally lazy standards. I went for a forest floor basing scheme stolen from Em's Wood Elves. It turned out to be easier than I imagined, once I got over myself and stopped worrying about the placement of every single leaf. The bases where sanded, sealed, and painted brown. I then stuck some bits of stick from the garden on a couple of them. A couple also had a hole drilled through the base and some more upright type plants added. I think these are from a Hornby trains scenics pack (You'll have to ask Em, she's in charge of the scenery stuff). Next I made up a mix of a couple of different static grasses, some moss type stuff (also from the garden), dill & oregano stolen from the spice rack, green tea lifted from a tea bag, the ivy came from Army Painter, and a few big brown leaves from a bag I found on the scenery shelf (again, not a clue where they came from now). I spread down a decent layer of PVA and literally threw the mix at it. Then sealed it all down with PVA. I did deliberately have some that was either ivy or dead leaf heavy for variety, but I was really surprised just how easy it to get some interesting looking bases without too much special or expensive stuff." 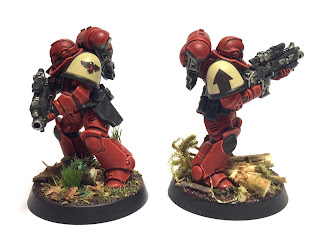 As said in the previous post I'm just seeing where my butterfly brain takes me with this little project. So far it's caused me to order some Hellblasters, because they seem to be dead shooty, to quoth the Ork. 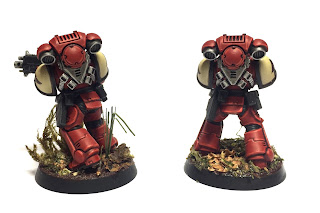 And my soul from out that shadow that lies floating on the floor
Shall be lifted—nevermore!