By Jeff June 10, 2019
With the core of the cult now laid down we can start to work on the weirder elements of the cult. There's purestrains on my workbench at the moment but first we have what happens when that pure strain goes very right and very wrong...

Here we're starting to see where the colour scheme starts to fragment. The abominations are clearly of the Ortag facility, as is the Primus although he has some flourishes that mark him out. But it is the Magus that deviates the most so we'll start with him. 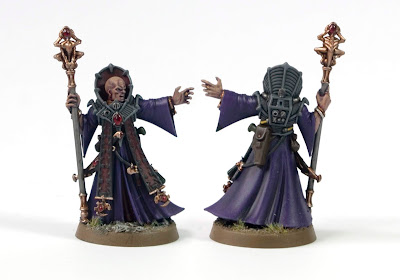 This is the first of a pair of Magi? Maguses? Maguseees? Meh, this is the first of two that I'm going to have in the army. His sister will be along shortly. I wanted the nice purple robes, first for tradition's sake, and second for emulating the skin tone of the Broodlord. It is his ritual connection to the father of the cult. In order to tie him to the rest of the Starborn Souls, I used the same neutral grey for the adapted pressure suit and there's a little orange peeking out at the neck, as though he is wearing the same fatigues under his robes that everyone else is. In addition I painted the lining of the robes and the stoles as the House Ortag Red that you see on the mining equipment and some of the tabards.

I think this does enough to bind him along with the rest so I could bling up the rest a bit. I went for brass rather than gold as I figured they'd have access to cast-able brass more easily. Rubies complemented the purple and also gave a visual flow to the red of the lining across the entire model. Finally I went for nice leather "officer" holsters and suchlike rather than the Khaki webbing of the rest of the cult. That, plus a little extra effort on the skin is all that separates him from the rest in terms of method. 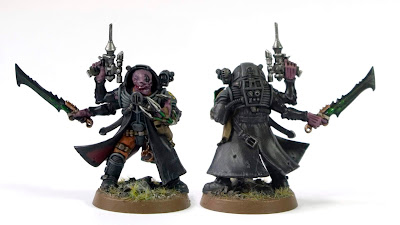 In the Genestealer Cults, the Maguses arises from the 4th Generation and are the spiritual leaders and psychic might of the cult. The Primus, by contrast, arises from the 3rd Generation and is the military leader. They have a gift for strategy and close quarters violence. In this case I didn't want him standing out too much. We don't want to attract snipers after all. So he got normal fatigues and pressure suit, augmented with a nice black leather storm coat. Much battered and probably looted from a commissar shot by the deserting Brood Brothers (oh yes, they're coming too). I tried to make the toxin injector claw look like it slid onto his normal claw rather than looking like a prosthetic.

It was the other weapons that gave me pause. A needle pistol is not a military weapon so I didn't want to make it look green and functional like the rest of the cult. I figured nicked or donated from a private owner so thought about the kind of collector that might own one of these. Shiny and ostentatious were what came to mind. Hence the super-bright nickel-plated finish on the needle pistol. 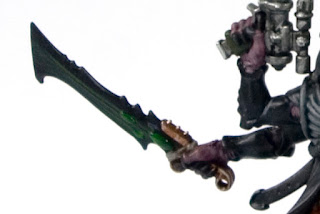 The bonesword was even more of a puzzle. I dislike the tyranid weapons in the cult range and have avoided them, but here it is. Re-reading the codex, it seems the partriarch shapes such things from a spawning pool that develops over the cults life. I figure the Broodlord is using the dead to make a genetic soup aping it's half forgotten masters. From this soup it births familiars to go out with its agents and shapes weapons for it's favoured charges. Thus it only made sense to paint it as though it was the same colour as the chitin of the genestealers: A purplish black. Into this I painted venom sacks in green with capillary lines extending from them to draw the poison along the length of the blade. Finally, the cult take the raw, chitin blade and set the tang into brass fittings to hold it.

I might be thinking too much about this stuff...

Now the Magus and the Primus might be seen as the bloodline getting it very, very right. The Abominations are what happens if it goes very, very wrong. These creatures are what happens when a purestrain goes wrong in the womb. Maybe the Biophagus (soon, oh yes, soon) has been playing and ballsed it up. Maybe the parents weren't compatible. Whatever the reason, the result is a lumpen monstrosity of terrible strength not the lithe, xenomorph, killing machine. These are no less dangerous but in a different way. Their parents still love them, but for the good of the cult and its secrecy they are kept shackled away. They do simple, hard work for the cult deep in the mines and are treated with love even if their savage minds can barely comprehend it.

These models are from the Deathwatch Overkill box plus a random one I grabbed from a bits site to make a round, legal five. Painting wise, they're not much different to the Acolytes, same skin tone (maybe a little purpler), same chitin. The only thing I added was some stains and muck to what remains of the fatigue trousers as I just couldn't see the Abominations being all that concerned with hygiene. I also painted the heavy mining tools as corroded and patina'd for the same reason. I'm planning another five of these brutes and their big brother the Abominant as I've got 30 purestrains so having another 10 whoopsadasies seems about right. Especially with the impending Biophagus.

That's all for this edition of "dear god Jeff has gotten xenos-enthusiastic fast". More soon! Until then...