By Jeff December 02, 2019
There is a lot that has to happen to push a cult into a revolution. You need weapons, training, leadership, and perhaps most critically, you need intelligence. No, not smarts although that helps, I'm talking the espionage type of Intelligence. 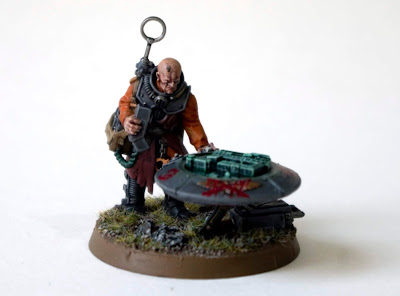 Just as the Primus leads the cult in battle, the Nexos leads it in the planning of the campaign. They are the most gifted analysts in the cult, capable of holding vast amounts of data in their minds and spotting patterns where others see mere chaos. 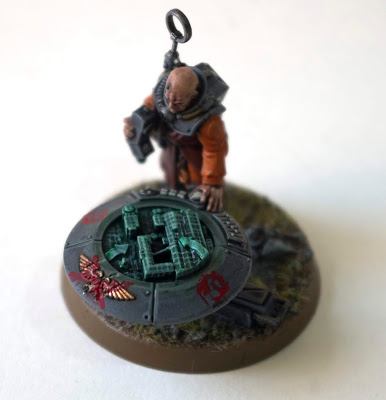 The Nexos was another of those models that I fell instantly in love with when I saw it. The focal point is clearly that awesome hovering holo-table. This then needed rather more attention than I might give other pieces of machinery! I didn't want to go nuts on the OSL as this is outside after all, but it needed a bit of glow. This was achieved by first drybrushing the display increasingly pale shades of grey until hitting pure white. The I glazed it with a couple of layers of black-green ink. Once dry I started in on adding dozens of scan lines in white over the green to make a grid-like matrix supporting the image before a final glaze. I later used a couple of thin glazes of the same ink on the edges of the finished table to make it look like the light is spilling out. It was fun painting an attack holo of a place I've spent so long in!* 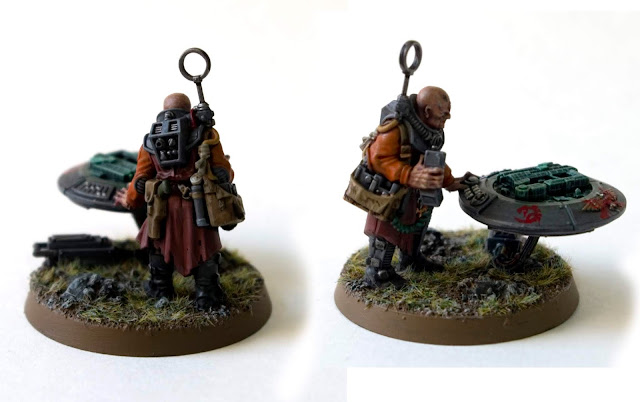 The rest of the painting is unremarkable as I wanted him to blend with the army while having enough pop to be a recognisable character. I used a bit of grey in the final highlights of his skin to age him a little as he has that grizzled look about him. I also decided that the sculpted defacement of the Imperial Aquilla wasn't enough so I crudely painted a big red x over it and then added Stealercult icons to the sides. Running little trails of paint down as though the paint had run helped the graffiti vibe.

So this is my Intelligence Analyst. But who's gathering all this intel for him to analyse? Step forward the Clamavus: 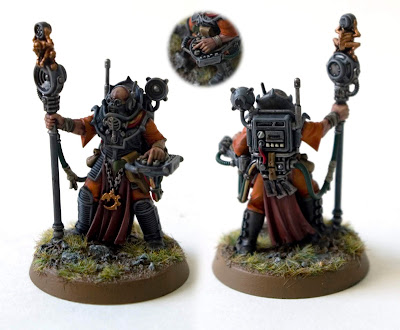 The Clamavus' fluff is very, very, very silly. So I'm ignoring it. Instead he is a communications intercept expert who remixes captured conversations and broadcasts them to give false orders and cause blue-on-blue friendly fire accidents. Better that than... making people's heads explode with alien noise.. moving on. If I'm honest I found the Clamavus a bit underwhelming to paint and frustratingly I notice in the photos some mistakes I'm going to have to go in and fix. To be honest, he's been included for game effect (with his mate the Nexos he can generate command points) so he's not been painted as anything exciting. Of course, it's not just signals intel that the cult needs. Getting actual reconnaissance with the ol' mark one eyeball is very handy too so lets get some scout vehicles all up in our business.

I've always had a soft spot for Sentinels so having an opportunity to include them in the cult was too much to resist. But how would I include them? Renegade PDF troops? Hmm. Bit too simple. What if Ortag Imperial Mineral Exploitation had a division responsible for clearing and maintaining the ground to be Exploited? Thus was Ortag Forestry born and the sentinels with the slightly pointless in-game chainsaws were perfect. A mixture of saws and cleansing burns from their flamethrowers clears ground for strip mining or construction. Their agile construction allowing them to pick their way down steep slopes and among fallen logs with ease. The cult have repurposed them to ape the recon role of their Imperial Guard cousins. Adding captured hunter killer missiles and changing up the mix in the flamethrowers gives a nasty forward operating unit.

As with the Atalan Jackels the principle colour of all my machines will be "House Ortag Red" otherwise known as Vallejo Primer Red. This was liberally applied, shaded with added black and highlighted with a couple of drybrushed layers of the basecoat with a bit of Deck Tan chucked in. I picked out any "caution folks" areas in a nice bright yellow and got the metalwork painted and some sponge chipping where appropriate before launching into a campaign of weathering. This started with liberal oily layers of black/brown ink washes to make a greasy overall tone. This was then followed with drybrushed and washed layers of Baneblade Brown dust on the lower regions of the model. This, combined with some little details like the logo, the gas cylinders being their real world colours, little warning texts and similar combine to make quite satisfying civilian versions of the military vehicle. 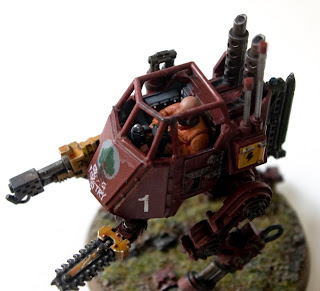 I did gloss over one factor in all that painting. The cabs are open on a scout sentinel so you have to paint them in sub-assemblies and assemble after the fact. I wanted the interior to be the Neutral Grey that the rest of the army has on their pressure suits (along with the orange jumpsuits) to tie everything in. But this turned out to be a massive ball-ache as having to do green stuff gap filling half way through painting is... an annoyance. Still. They look good.

And that's all for this session. There's more coming very soon, more purestrains, more abberants and then the home stretch. This project is getting alarmingly close to completed. Exciting! Until then gentle readers,