In today's post I'm going to talk about how I weathered my newly-painted primaris aggressors, and why I think people paint astartes' boots wrong (the hot take the internet's been waiting for, I'm sure you'll agree).

But first, a rant.

The primaris answer to the venerable terminator is simultaneously exactly what you want terminators to be on the tabletop, and deeply silly on the visual front. Decades of Stockholm Syndrome have allowed me to almost forget how preposterous power fists are as a weapon design, but to double down by attaching bolters (a famously temperamental weapon) to a melee weapon (i.e. something that's got to take some punishment) and then attaching massive ammo feeds to it (definitely going to get broken in close combat) is basically an invitation for aggressors' wargear to break about five seconds into their first close encounter with the enemy.

At this point you're probably thinking it's weird of me to put time into painting models I think are silly, and I can explain, BUT FIRST, why do they have solid blingwangs swinging between their legs? Those are 100% going to get in the way. At least a cloth tabard has no volume! If I liked these models more I would have done the codpiece sculpting needed to remove them. Oh and also they have disco heels. Sure. Why not? When disco power-heels are the least silly of the silly things, you know you've achieved greatness.

Despite these quibbles, they've still ended up in my collection. Why?


Like so many models before them, these guys did grow on me as I painted them, and thus have I gone from active disdain to shrugging indifference. It does feel great to have scratched them off the to-do list, as I absolutely love the other minis waiting in the queue, and have already made inroads into my converted captain. So... I guess the rant is over. On to the constructive points.

Rubberise my face heels
As pretentious as it is for me to say the GW studio paint their own minis wrong... pff screw it I might as well lean into this.

The visual language of a space marine is a mixture of rigid armour plates and bendy rubber bits connecting them. People therefore paint the seals between the plates as rubber. The soles of the boots are also bendy, but people always paint the soles of the boots as armour colour, so the brain says "that's solid metal" even though they can't be. Now obviously one can colour rubber, so technically that's fine, but it helps someone parse the information if different materials on a miniature are painted in consistent colours so you can understand the thing you're looking at.

Consequently I've been painting all my primaris marines with rubberised soles, and in the case of the aggressors this really helped take the edge off their hilarious disco heels. The irony, of course, is that after basing and weathering you can barely see the difference. My commitment to irony knows no bounds.

Refining the colour scheme
Since my initial post showcasing the first five intercessors, where I went through all the colours I'm using, there have been a few changes. When I finish the army I'll do a full updated step-by-step, but I'll record discoveries/refinements along the way.

First up, while listening to an episode of the Independent Characters, regular show host Jody mentioned the liner paints by Reaper, formulated specifically for lining in panels etc. They come in three colours: brown, grey, and blue. Since I was at the time having some trouble with Nuln Oil going fuzzy and white for no obvious reason, I decided to give them a go. They are perfect for the their intended purpose! A matte finish, thin enough to naturally sink into the crevices, but waaay too thick/strong to use as a shade without dilution. They're definitely in a niche, but they fill it well. Boom, and more importantly, tish.

Secondly, I've added a dot highlight stage to the red, as it made no sense to only do that for the blue.

Finally, I'm going to try doing the shoulder pads with Corax white (i.e. an off-white) rather than pure white, so that I can apply highlights (which will also enable me to use the weathering discussed below).

Weathering
The big thing I decided to experiment on with these guys was adding weathering to my colour scheme for the Cobalt Scions. There's always something bracing about doing six stages of blue and then throwing some weathering for the first time, when you're not sure if you'll like the result.

The technique is simple enough: paint your mid-highlight tone (Calgar Blue in my case) in random dabs, then go back over with your shade tone (Reaper's Blue Liner in this instance) just above the marks you made. This has the effect of making the dents appear 3D, assuming the light source is from above. Obviously if you wanted the light source to be coming from another direction for some reason, adjust accordingly. Darren Latham has a good video on painting this style of weathering.

The other kind of weathering I added was some Typhus Corrosion to muddy-up the boots, helping bed them into the moorland bases I'm giving to all my Imperial armies (so I can make some delicious Imperial Soup, with the marines acting as the croutons).

Here's a quick step by step on the mud:
It's important to work quickly, as the water and the paint will both dry fast. It's therefore best to do one area (e.g. a foot) at a time. The aggressors' boots are so big that I actually did the front and back separately to make sure I had enough time to work the paint.

I'm happy with the results, so now I'll have to go back and apply it to the intercessors I already painted. Here's the clean and weathered squads side by side: 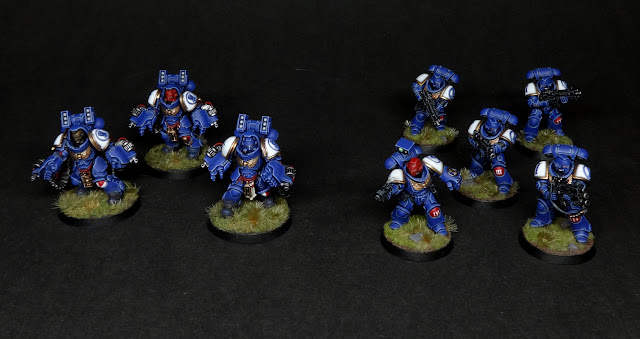 It's a subtle difference, as I didn't want to go overboard, but I think the weathering helps bring them to life a little. Next up is the captain, so I can actually get them on the table as a patrol detachment, so I'm really glad I took the time to experiment on the aggressors before moving on to him!