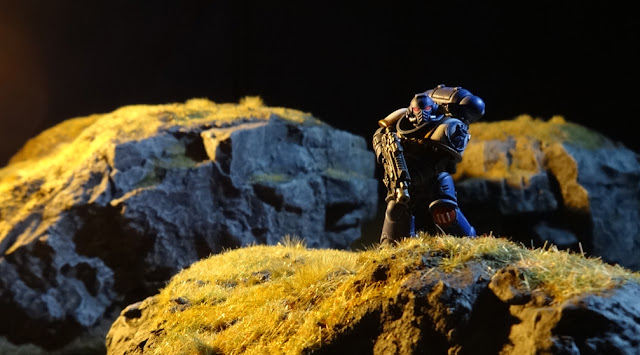 Today on the Bunker: hills. The rocks. The rolling grassers. The loomy craggers. The swole risers. As mentioned in my last post on our new Fantasy campaign, one of Mark's last gifts to the Beard Bunker was to enhance our tattered old rocky outcrops. I had a lot of ground to cover in that post, so couldn't really go into it there, but since rocky outcrops are universally useful scenery I thought I'd expand on how these hills were made.

Whilst Andy, Jeff and I did the painting and grasses, Mark did the build. Or... the rebuild, taking some of my old and busted terrain as a starting point and literally building on top of it. He used the method and materials discussed in this video from Luke's APS, and the difference was... pronounced.


The video link above is the best place to see how these things are built, but the basics are this: Mark used the rock moulds from Luke's APS and poured in the compound/plaster he sells. Once he'd made up a few batches of the stuff, he then took my old hills and stuck the plaster rocks over the top as cladding. He then used the compound mentioned in the video to smooth in the joins and the shape of the earthen areas before then applying sand, grit, etc, to add texture as appropriate. Mark did use the method suggested by Luke's APS to paint it, as the bare plaster takes on the colour of washes well, although the finished result looked more like a stone than a cliff face. It might've worked better if Mark had gone with the rock strata to band the colours, but the finished result didn't really look quite right or, indeed, fit in with any of the other rocks in the scenery we have. Arse bangles, we thought.

Cut to a month or two later, and I end up painting it again, with emulsion paint this time. I had to do a rather rushed paint job against a deadline, so the rocks are very basic. It'd be nice to go back and add more colours and detail if I get a chance.

Having painted them, I got a bit over-excited about MANY FLAVOURS OF GRASS. Except the Class B kind; das ist verboten.


Grassing yo bumps
Come the flocking, the first thing to do was to assemble a fine array of grassy goodness: three flavours of tufts, and four flavours of static grass of varying length and colour. This would help make things look more natural, and once you've figured out your recipe, is surprisingly quick to do (though obviously still slower than just doing one colour).

Once you've gone through your various shades, you come to the final shade: your primary grass colour (i.e. the one you used for your board, if you have one). Cover any remaining areas with this final colour. Use a sieve if it's a big area. With everything now fully covered with grass, tap off the excess and stick that back in the tub (it'll be almost entirely the final colour, since the rest should have been applied more thinly and therefore won't have any excess to fall off, so don't worry about contaminating your main tub colour).

You'll note I said to cover a section with PVA, not the whole thing. That's because you don't have long before the surface of the PVA starts drying, and it won't retain as much grass. Do a discreet section, finish it, then move on to the next one.

With your grass applied, give it a quick blow to help it stand up a little. Try not to immediately inhale a lungful of static grass. Honestly the blowing is optional (in this context, at least).

Next up, get yo tuft on. I used to apply tufts with PVA/white glue, but found the long curing time of PVA meant you ended up with tufts hovering off the ground and other nonsense. This time I used superglue/CA glue. I was worried about getting white vapour on the surrounding area, but actually that didn't happen, and it worked much better than PVA. Go figure.


That's pretty much it. The painting could be a bunch more detailed and less monotone, but otherwise I think these came out well, and have also given me a roadmap for basing my Imperial soup army.

Many thanks to Jeff and Andy for being my sweatshop minions; we grassed one outcrop each, and honestly, doing scenery as a team is the way to get it done. Most of the tasks are very simple, many hands made light work, and we all benefited from having more terrain in the slaughter-filled geekend that followed.

On a final (dangerously sentimental) note, I want to thank Mark. He knew he was never going to get to game on these hills; he was barely well enough to build them. But he knew we'd be using them for years, and said he liked the idea of leaving something useful behind for us to enjoy.

Plus, he got to make a big plastery mess in my gaming room, and who doesn't love making a mess?