By Maisey March 09, 2020
If you are thinking "What the hell is that?" you would be having an appropirate response to seeing the Mutalith Vortex Beast for the first time. The Mutalith Vortex Beast, or Gribbles as I've taken to calling it, is a support unit for the Thousand Sons. It is described in the codex as "an utter abomination of nature. It is a terrifying fusion of monster and magic, a creature mutated beyond all reason by the power of Chaos." Which sounds fun right? 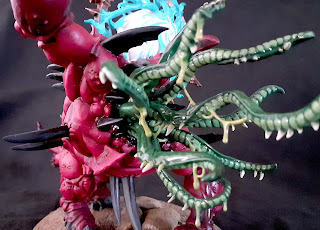 In game terms it bounds around the table dishing out upgrades and damage at random to whatever is close by. It will then go on to doing inappropriate things with it's tentacles when ever it gets into combat. It's a delightfully nuts unit and I just had to add one to my Thousand Sons. 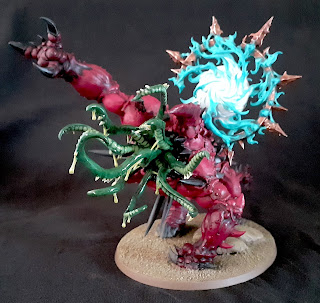 I do have a few regrets with it. I would call them lessons learnt but these lessons were not learnt and I'll carry on making those mistakes time and time again. I am human after all. 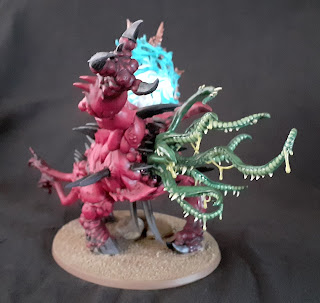 Firstly I really really reeaaallly should have left it in more subassemblies for painting than I did. I left the big swirly thing off as I saw that just never fitting into the figure case with it being permantly attached. I really should have done the same with the tentacles. They where a nightmare to paint attached to the body like that. Especially as it took my three attempts to get the colour scheme right. 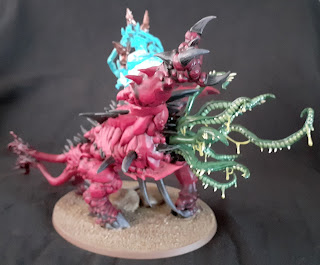 Lesson number two is magnets. I should have magnetised the tentacles at the very least, probably the right arm as well. Maybe even some of the spikes sticking out from where ever. Transporting this thing is going to be a total pain, even with the fancy large GW case with the new(ish) foam system. I might need to do a rant about that foam system another time.

The body was a good solid layer of screamer pink as the base coat. Then a good dry brush with Wazdakka red. It then got an all over wash of Carroburg Crimson then relayered with Wazdakka to tidy up. The whole thing then got some selective high light of Pink Horror. The 8 pointed star that is carved into it's back got a further edge highlight of Emperprs Children and Fulgrim Pink. The extremities got further washes of Druchii Violet getting closer to the tip with each layer to create a nice fade.The pointy bits then got a Abaddon Black/Eshin Grey combo. 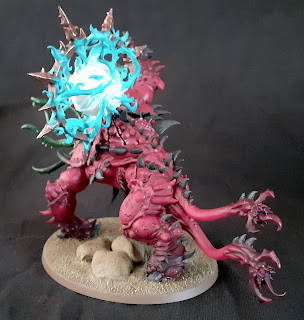 The Tentacles got a base coat of Warboss green and a wash of Biel-Tan Green. Then highlighted up through Warboss Green, Skarsnik Green and finally Ogryn Camo. As the tentacles look like they are bursting out of the neck hole I gave them a good solid coat of gloss varnish for maximum moistness. 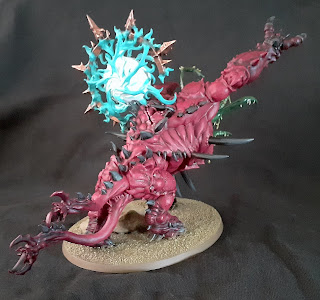 The big swirly thing started with the 8 pointed star. That got a base coat of Balthasar Gold, a wash of Reikland Fleshshade, and a highlight of Sycorax Bronze. The white ball was Celestra Grey, Ulthuan Grey and White Scar in many many layers. The blue bits started with a base coat of Baharroth Blue, keeping it really thin and transparent where it meets the white and bronze bits. Then it got a 'highlight' of Temple Guard Blue. Then a final 'highlight' of Sotek Green. The reason I say 'highlight in little quotes like that is because I wanted a flame type effect, and flames are brighter/hotter in the middle and get darker/colder the further out they go. Hopefully I was successful with that. I finished it off with a Sotek Green glaze around the bits where the blue meets bronze, just to give a little glowing effect. 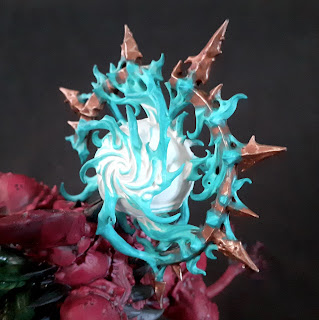 Gribbles then got my standard desert basing with a couple of extra rocks superglued to it for interest. This is not an army that needs fancy basing. The Sand does just fine and compliments the bright colours of the rest of the army. 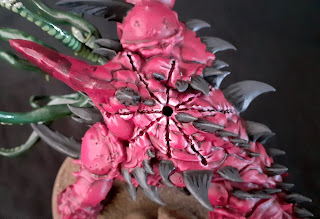 Now it's just a case of arranging a game to see how it does. I suspect that every lascannon, missile launcher, and battle cannon will be pointed at it. Hey, if they are pointed at Gribbles then they are not pointed at anything else right?